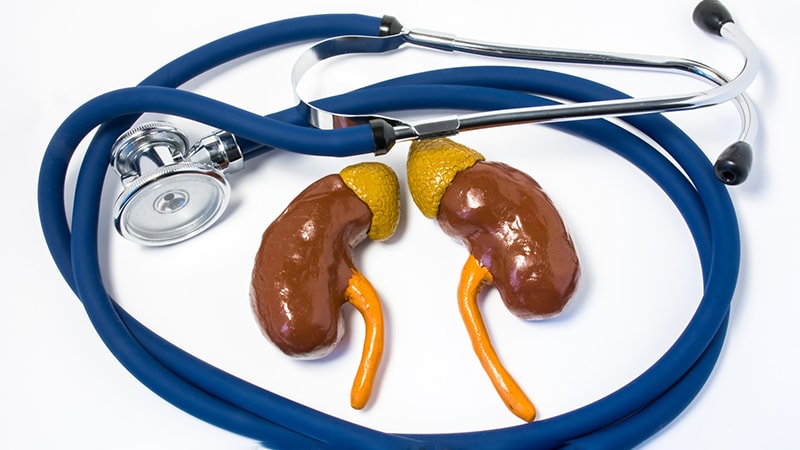 Researchers recently reported a preliminary signal of possible structural damage in the kidneys of six patients after long-term treatment with a renin-angiotensin system (RAS) inhibitor, a superclass of agents that includes the angiotensin-converting enzyme (ACE) inhibitors and the angiotensin receptor blockers (ARBs).

The report published in JCI Insight documented pathologic anatomic changes in glomerular arterioles in six patients treated with a RAS inhibitor for 6 years or more.

This is a startling finding because these are well-established foundational drugs for preserving renal function and slowing progression of chronic kidney disease (CKD). They are also key agents for lowering blood pressure, reducing cardiovascular disease events, and improving outcomes in patients with heart failure with reduced ejection fraction.

Despite this key role for RAS inhibitors, “we found that renin cells are responsible for arteriolar hypertrophy when they are chronically stimulated by either experimental or spontaneous mutations of the RAS genes or the use of RAS inhibitors in mammals, including humans,” states the new report, written primarily by researchers from the Child Health Research Center of the University of Virginia School of Medicine in Charlottesville.

However, the authors also stress that, for the time being, they do not see their findings as a reason to change the widespread clinical use of ACE inhibitors and ARBs.

Reactions to the report among nephrologists and other kidney experts ran the gamut from concern to skepticism, but most agree that the next step is to generate more data to confirm and better establish the findings.

Not a Reason to Stop Using RAS Inhibitors

“We do not advocate to stop using RAS inhibitors — which are effective to treat hypertension and prevent cardiovascular disease and/or mortality — given our results and those of other studies cited here,” the report cautions.

The authors instead recommend running “prospective randomized, controlled studies with histological evaluation to determine the extent of morphological and functional renal damage caused by the widespread use of RAS inhibitors.”

The section of their report that deals with human subjects focused on 16 people: six patients with benign nephrosclerosis who had been treated with an ACE inhibitor or ARB for 6 years or more, six aged-matched patients with benign nephrosclerosis who had never received a RAS inhibitor, and four healthy controls. All 16 had undergone a kidney biopsy.

Nephrologists and other kidney experts are somewhat divided in their responses to this new finding.

“The existing data clearly have shown clinical benefit from RAS inhibitors, but the new report suggests potential harm,” and the new observations “are a warning,” commented Daniel Batlle, MD, professor of nephrology and hypertension at Northwestern University School of Medicine in Chicago, Illinois.

“These are very credible investigators and very elegant studies. Had they not looked so carefully we would have never known this,” said Batlle in an interview.

It’s a signal that now needs further assessment with larger numbers of patients, he added.

But a much more dismissive view was voiced by Rajiv Agarwal, MD, a nephrologist and professor at Indiana University School of Medicine in Indianapolis.

In an interview, he cited concerns about the 16 people studied who had all undergone a kidney biopsy, a critical criterion for inclusion in the study but also a requirement that potentially introduced ascertainment bias.

Two of the RAS inhibitor-treated patients had IgA nephropathy and underwent biopsies because of declining renal function and proteinuria, which could have been caused by confounding conditions. Agarwal also noted that the clinical circumstances behind why some patients received a RAS inhibitor while their age-matched controls did not introduce opportunities for confounding.

The possibly unreliable clinical evidence in the new report contrasts with results “from randomized trials that used [RAS inhibitors] in people with CKD and albuminuria and showed association with protection against kidney failure and hospitalizations from heart failure,” Agarwal emphasized.

“Therefore, I do not agree with the authors’ assertion that prospective, morphological studies in humans are necessary. We should try to implement this low-cost, high-value therapy [RAS inhibitors] in people with CKD and albuminuria, as recommended in guidelines,” Agarwal maintained.

“Clinical benefits from long-term RAS inhibitor therapy are well established, and the findings in this report provide no information that questions those benefits,” agreed Csaba P. Kovesdy, MD, professor of nephrology at the University of Tennessee Health Science Center in Memphis and chief of nephrology at the Memphis VA Medical Center.

“I would strongly caution against overinterpreting these results,” Kovesdy said in an interview, “even if the histological findings were confirmed but without clinically relevant changes.”

In contrast, Carlos M. Ferrario, MD, is another expert who sees the new report as something to take seriously with careful follow-up.

It’s “a very strong, convincing paper. The RAS inhibitors are effective at lowering blood pressure, but not enough, and there is an uncoupling between their level of blood pressure reduction and target organ responses,” said Ferrario, a professor of surgery at Wake Forest School of Medicine in Winston-Salem, North Carolina, who has studied RAS inhibitors.

“The Gomez paper shows that we need to reevaluate our current approach to antihypertensive treatments. When we block a pathway in the body [like the RAS] other mechanisms come into play and it’s naïve to think it will lead to complete medical response,” he said in an interview.

Ferrario has maintained in published papers, such as in a 2017 review published in Current Hypertension Reports, that although ACE inhibitors and ARBs have a proven beneficial impact on morbidity and mortality “it is frequently ignored that a vast majority of treated patients remain at risk for disease progression,” suggesting the need for additional approaches to safely blocking the RAS.

Studies That Began With Mice

The report by Gomez, Sequeira Lopez, and colleagues includes data from several mouse studies as well as the study of kidney biopsy specimens from the 16 people. The mouse studies examined the renal effects from suppressed renin production either by genetic manipulation or with long-term (6-month) daily treatment with the ACE inhibitor captopril.

Both sets of mouse experiments showed that deletion of renin or inhibition of the RAS led to concentric thickening of intrarenal arteries and arterioles caused by “the multiclonal expansion and transformation of renin cells from a classical endocrine phenotype to an invasive matrix-secretory phenotype. The cells surround and invade the vessel walls and stimulate the accumulation of adjacent smooth muscle cells resulting in blood flow obstruction, localized ischemia, and fibrosis,” the report states.

The animal results “prompted us to investigate whether people develop similar lesions, difficult studies because patients with hypertension do not usually undergo kidney biopsy,” said Gomez, professor of pediatrics and a nephrology specialist at the University of Virginia, and Sequeira Lopez, also a professor of pediatrics at the University of Virginia with a focus on nephrology research.

Gomez and Sequeira Lopez acknowledge the key role RAS inhibitors play in guidelines for managing CKD as well as for treating hypertension and other diseases, but they also note that some studies “cannot confirm benefit [from RAS inhibitors] on the progression of CKD.”

Examples they cite included a 2009 study of 285 normotensive patients with type 1 diabetes and no excess albuminuria that showed no effect from the ACE inhibitor enalapril or the ARB losartan on progressive renal dysfunction during 5-year follow-up.

A second neutral report they cite, also from 2009, showed no significant benefit for reducing microalbuminuria incidence during nearly 5 years of candesartan treatment in more than 5000 patients with type 1 or type 2 diabetes.

Gomez and Sequeira Lopez also note that if the arteriolar hypertrophy they saw in mice and a handful of patients leads to renal dysfunction, it may take so long to develop that trials with relatively short follow-up might not detect it.

“Structural alternations of the kidney, particularly if they are focal, may take a long time to be reflected in functional deterioration,” they caution.

Gomez, Sequeira-Lopez, Batlle, and Ferrario have reported no relevant financial relationships. Kosvesdy and Agarwal have reported being consultants for numerous companies.