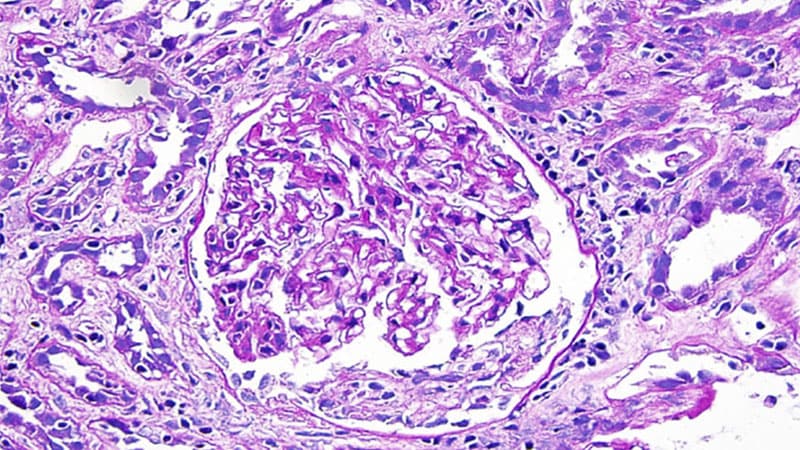 However, the researchers also found that among these patients, those who had developed immune-related adverse events had better survival than those who did not, in keeping with other studies that have suggested that immune-related AEs show that the immunotherapy is working.

The new study was published online March 30 in the Journal for ImmunoTherapy of Cancer.

It involved a review of 2207 patients treated at a single academic center with any one of six immunotherapies (ipilimumab, nivolumab, pembrolizumab, durvalumab, atezolizumab, or tremelimumab) between February 2013 and January 2019.

One quarter of these patients (n = 549, 25%) developed acute kidney injury within a year after beginning treatment, and these patients tended to be older and were more likely to have hypertension and chronic kidney disease.

In total, 617 (28%) patients died within a year of treatment, and these patients were more likely to have stage 4 disease.

Patients with acute kidney injury had a threefold higher hazard of death (3.11) compared with those without injury.

Although the patients with AIN experienced more severe acute kidney injury, as noted by higher peak serum creatinine (3.3 vs 1.4 mg/dL; P < .001) and  higher steroid use, they also they had lower mortality rates in both univariable analysis (HR, 0.43) and adjusting for demographics, comorbidities, and cancer type and disease severity (adjusted HR, 0.44).

Even after controlling for acute kidney injury stage and duration, AIN continued to be independently associated with lower mortality.

AIN is thought to be an immune-related adverse event (IrAE) and these findings indicate that it “may be a marker of therapeutic response to ICI,” write the authors, led by Dennis Moledina, MBBS, PhD, an assistant professor and director of the Kidney BioBank at Yale School of Medicine, New Haven, Connecticut.

This link between immune-related adverse events and efficacy of immunotherapy has already been reported many times, with various types of adverse events, including dermatologic and endocrinologic events, being linked to better efficacy and better outcomes.

This study suggests that AIN may be another.

“Our data suggest that the prognosis after acute kidney injury may be modified by the underlying etiology,” the authors write. “Therefore, patients who develop immunotherapy-associated acute kidney injury should undergo testing, when clinically appropriate, to determine whether the underlying cause of AKI is AIN. Not only is the management of this cause of AKI different from others, but it also provides additional prognostic information.”

However, it is difficult to diagnose AIN without a kidney biopsy, the authors note. They have recently developed and externally validated a statistical model for diagnosing AIN, using data from patients with biopsy-proven AIN and controls.

They found a high degree of agreement between the model-estimated AIN diagnosis and that determined by clinicians and a recently proposed classification schema. In addition, 11 patients underwent a kidney biopsy, and those with AIN on histology (n = 8) had a higher predicted probability of AIN based on the model than patients with other diagnoses.

This study was supported by National Institutes of Health. Two of the co-authors are co-inventors of the pending patent application ‘Methods and Systems for Diagnosis of Acute Interstitial Nephritis’ that is subject to an option for a license agreement with Renalytix AI.