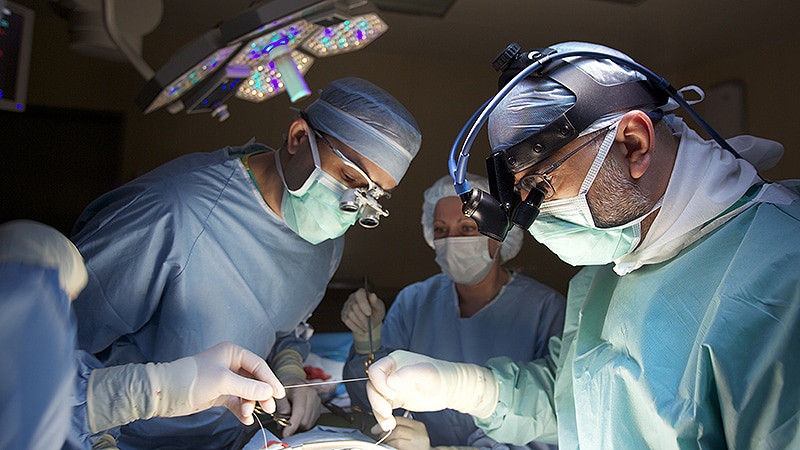 “We could show an improvement in LVEF of over 10%,” Johannes Holfeld, MD, of the Medical University of Innsbruck, Innsbruck, Austria, told theheart.org | Medscape Cardiology. “This is more than any regenerative therapy option could ever achieve in a clinical setting.”

Furthermore, there were no procedure-related adverse events during the study, and patients who received the intervention achieved significant improvements in physical capacity and quality of life.

Holfeld noted that the group developed direct epicardial cardiac shockwave therapy in preclinical experiments over more than 15 years. In a 2018 study, they reported it regenerated ischemic myocardium in mice via the induction of angiogenesis and reduction of fibrotic scar tissue, resulting in improved left-ventricular function.

Multicenter Trial on the Way

The study randomly assigned 63 patients, aged 21-90, on optimized medical therapy with an LVEF £ 40% on cardiac MRI to SWT (Heart Regeneration Technologies GmbH) or sham therapy after CABG. The 33 patients in the active intervention group received SWT at 0.38 ml/mm2, 3 Hz intra-operatively.

Key exclusion criteria were acute infarction, cardiogenic shock, and concomitant valve disease. The patients’ mean age was about 64 in both groups; the SWT group had five women and the control group, two.

The primary endpoints were LVEF improvement at 1 year and occurrence of device-related serious adverse events. Investigators were blinded to treatment and results validated by an external MRI core lab.

Holfeld noted that although the cohort was too small to perform subgroup analyses, shockwave applications for wound healing and non-healing bone fractures showed that age and other factors do not affect response to therapy.

The findings support the safety of adjunctive SWT, he said, and “potentially solve an unmet clinical need of patients suffering from ischemic cardiomyopathy. Regeneration of infarcted heart muscle may become clinical reality.”

Nevertheless, he acknowledged, a multicenter trial is needed to confirm the findings. Therefore, he said, “We are currently preparing a European as well as a US multicenter trial. Interested clinicians should participate in the trial to enable access for their patients.

“Physicians will need to train on the new technology, but every cardiac surgeon should be able to adapt this quickly,” Holfeld added. “It is not very complex.”

The trial, called CAST-HF II, is expected to launch before the end of the year, he noted.

“We have had many trials looking at cardiac regeneration, looking at stem cells, bioprinted patches, and other means, and all have been disappointing,” he told theheart.org | Medscape Cardiology in an email. “This seems to be the first translational science, going from bench to bedside, that seems to have a positive effect, with follow-up to 1 year.”

Nevertheless, Myers noted “this is just an initial experience, with a limited number of patients included, with differences in baseline characteristics that don’t match perfectly even if these differences didn’t reach statistical significance (eg, diabetes, hypertension, and COPD > 10% relative prevalence difference between groups).”

“This is very promising,” he said. “We know very well that small initial studies that show a significant point estimate are often not confirmed in larger-scale, phase 2 and 3 trials. I would like to see a longer follow-up, larger scale phase 3 study looking at hard endpoints.”

Holfeld and a coauthor are founders and shareholders of Heart Regeneration Technologies GmbH, an Innsbruck Medical University spinoff.