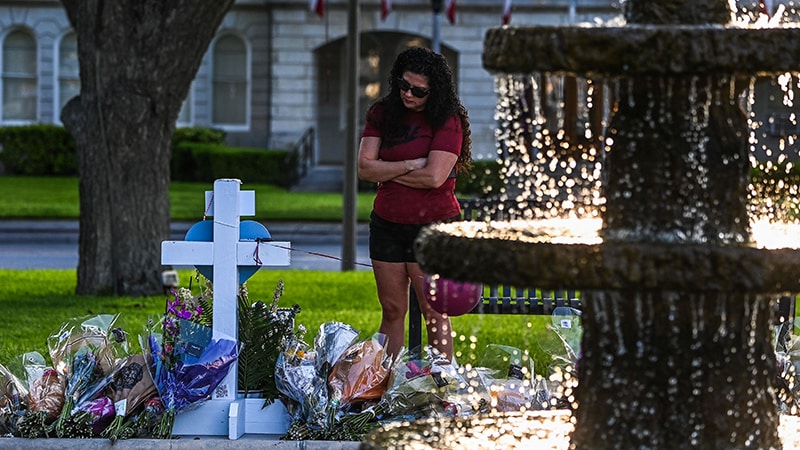 Amy Chambers is planning a visit soon with the principal of her son’s elementary school in Joplin, MO. The grade level of the 19 children killed in the Tuesday school shooting in Uvalde, TX, was not unnoticed by her. Her son, the youngest of her three, is also a fourth grader.

Chambers, a church secretary in Joplin, thinks the security to get into her son’s school is good, but she has questions about how the school’s individual classrooms would handle an intruder.

When one of her older children was at a college meeting about security, she remembers hearing the speaker talk about having the entire class throw things at an intruder to deflect attention, and perhaps then attack. “I want to visit with our school about that,” she says, and find out, “Do they have individual class protocols” to deal with the what-ifs.

Likewise, Dana Pustetta, a television camera operator in Long Beach, CA, and the father of a 5-year-old daughter, plans to get info about the security situation at her school.

“I will talk to my kid’s school and see what training they will employ,” he says.

He hopes they call it “emergency preparedness” rather than an “active shooter drill.” The latter, he says, “I think feeds the fear.” He would prefer if school officials explain it like “if this happens” and tell the kids what to do, rather than give the impression they should expect the incident. “I would rather not assume the worst.”

In the wake of the Uvalde tragedy, in which two teachers also died, school safety is understandably on the minds of parents with kids in school. Kim Vann is the chief operations officer of Safe and Sound Schools, a national nonprofit safety and advocacy center founded by parents of children killed in the Sandy Hook Elementary School shooting in 2012. She says they’ve been hearing from parents and others since the Tuesday tragedy.

“We can’t keep up,” she says of inquiries. “The calls we have been getting are [also] from schools and state associations looking to share resources with parents and schools.”

Besides asking schools for specifics about safety protocols, some parents are reaching out to lawmakers, and others asking for gun legislation changes.

But Pustetta isn’t planning to reach out to lawmakers to ask for gun reform.

“I think a letter to a senator will fall on deaf ears, until a senator’s kid or grandkid is directly involved, unfortunately,” he says.

But other parents – some high-profile – are urging people to reach out to their lawmakers.

Steve Kerr, coach of the NBA’s Golden State Warriors, and a parent whose father was murdered in 1984 while a professor at the American University of Beirut, devoted a pregame news conference on Tuesday to a plea to take action on gun legislation.

“Enough is enough,” a very emotional Kerr said as he cut short the conference before the Western Conference playoffs and talked not at all about basketball.

School security overall has been improving in recent years, according to Michele Gay, executive director and founder of Safe and Sound Schools. She lost her daughter, Josephine Grace, in the Sandy Hook shooting. In a statement, she says the organization does an annual State of School Safety survey. Its next report will be released in early July.

“Over the past 10 years, we have seen steady improvement nationwide in basic safety and security measures,” she says. Her organization has a Framework for Comprehensive School Safety, which emphasizes a team approach, as well as including many areas of school safety such as mental health, emergency management, health and wellness, and security.

But she acknowledges that “Safety programming, measures, and policies vary greatly from district to district, state to state, and across urban, rural, and suburban settings.”

How Parents Can Research, Get Involved

She suggests a two-step process for parents: Find out what the plan is. Find out how you can take an active role.

Parents should also think about any special skills they have that would be useful as school officials are developing or updating safety and security plans. For instance, parents may be first responders who can share their insight. “They can bring their knowledge to the planning,” she says.

Some families have tried to make meaning out of tragedy by running for a school board seat, she says, so they will have a hand in policy about safety and security.

Knowing what the plan is at your children’s school may help reduce parental anxiety, she says.

Offering your help through the school PTA would be one avenue, Gurwitch says.

Ken Trump is president of National School Safety and Security Services, a school safety consulting firm in Cleveland, OH. On his website, he lists 10 practical things parents can do to assess school security and emergency preparedness. The list includes things you can ask your child, depending on age, about safety – like where they feel safe and what can be done to improve safety. It also says parents should know about access to the school and how visitors are allowed to enter.

Safe and Sound Schools posts its Framework for Comprehensive School Safety. Its categories reflect the complexity of school safety.

The PTA also offers guidance on what parents should expect in terms of school safety and suggests important questions to ask.

But security at schools isn’t always enough. Uvalde’s school system received a nearly $70,000 grant from the state, increased the number of officers in its police force, and doubled spending on security over the past 4 years, according to The New York Times.

A 2019 study published in the journal Violence and Gender found that increased security in schools has not been an effective deterrent.

“This comprehensive review of the literature from 2000 to 2018 regarding school firearm violence prevention failed to find any programs or practices with evidence indicating that they reduced such firearm violence,” the authors wrote. “The adoption of ineffective measures to reduce school firearm violence may lull parents, school personnel, and students into thinking they no longer have to be concerned about their safety at school.”

Despite the anxiety around school safety, Gurwitch advises parents to enter conversations with school officials with an eye and a mindset of modeling thoughtful discussion for their children. “We don’t have a uniform idea of what to do to make this unlikely to happen again,” she says. “People have different opinions.”

She recalls the often brutal disagreements among parents and between parents and educators during COVID-19 masking debates, and she urges parents to keep the conversations calm. “We have to be mindful we still have to be role models for our children.”

The Washington Post: “Steve Kerr’s life was shaken by gun violence when it took his father.”

The New York Times: “University Head Killed in Beirut; Gunmen Escape,” “Uvalde Had Prepared for School Shootings. It Did Not Stop the Rampage.”