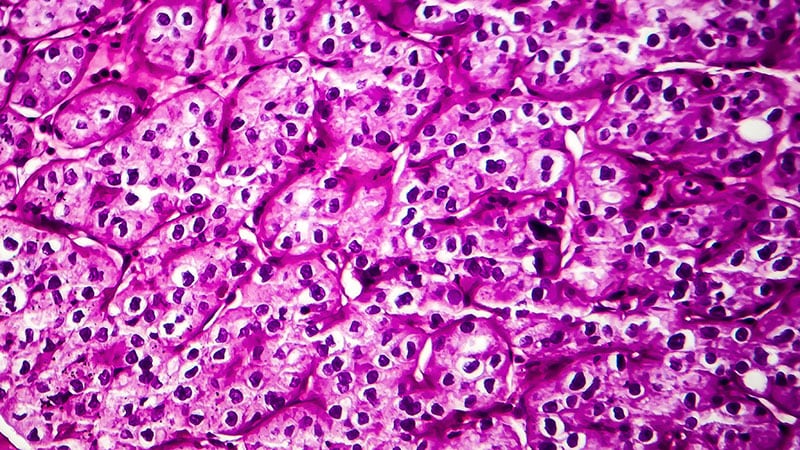 Adjuvant immunotherapy with atezolizumab for patients with renal cell carcinoma who have had a nephrectomy with or without a metastasectomy, failed to improve clinical outcomes in a group of patients who are at high risk of recurrence, finds a new international study conducted across 28 countries.

The study, called IMmotion010 and published in The Lancet, was a randomized, double-blind, multicenter, phase 3 trial of 778 adult patients with renal cell carcinoma (RCC) with a clear cell or sarcomatoid component. The study failed to meet its primary endpoint which was defined as a statistically significant improvement in disease-free survival as compared with placebo.

“Our results add to an emerging body of literature around the role of adjuvant immunotherapy for renal cell carcinoma. With the longest duration of follow-up to date to our knowledge. We observed no evidence of clinical benefit in disease-free survival or overall survival with adjuvant atezolizumab in patients with high-risk localized or fully resected renal cell carcinoma,” wrote the authors who were led by Sumanta Kumar Pal, MD, of City of Hope Comprehensive Cancer Center, Duarte, Calif. “Given a growing list of trials that have not shown benefit with adjuvant immunotherapy, the results call for greater attention to patient selection with this approach.”

Pal and associates conducted the study to gain more insight into the potential role of adjuvant immunotherapy in patients with renal cell carcinoma who have undergone the standard treatment of nephrectomy with or without metastasectomy. Previous studies of anti-VEGF treatments have produced mixed results, including the large phase 3 ASSURE trial, the authors wrote. “Given these mixed results, use of adjuvant targeted therapy in renal cell carcinoma remains infrequent,” Pal and associates wrote.

However, pembrolizumab (Keytruda, Merck) a programmed death receptor-1–blocking antibody, is an immunotherapy which, in combination with axitinib, is approved as a first-line treatment for patients with advanced RCC.

“The results of IMmotion010 do not support the use of adjuvant atezolizumab for fully resected renal cell carcinoma. Future work will include exploration of clinical-based or biomarker-based subsets that might derive benefit from this approach,” the authors wrote.

The researchers acknowledge their findings contrast with those of the KEYNOTE-564 trial of adjuvant immunotherapy with pembrolizumab after nephrectomy in renal cell carcinoma. KEYNOTE-564 reported a disease-free survival benefit of over 24 months and in an analysis done at 30 months. But in KEYNOTE-564, the study comprised only 6% of patients with M1 no evidence of disease. And, it included only patients with synchronous metastases or metastases resected within 1 year of nephrectomy. In the new study, 14% of patients had M1 no evidence of disease, and it included both synchronous and metachronous disease with recurrence within 1year of surgery.

Adjuvant immunotherapy with pembrolizumab is considered optional for patients with intermediate-risk or high-risk operable clear cell renal cell carcinoma per European Society for Medical Oncology and European Association of Urology guidelines because of the lack of confirmed overall survival benefit and toxicity-related considerations associated with immunotherapy.

“These factors must be considered in the adjuvant setting as, following nephrectomy, patients are cancer free and might be cured by surgery alone. As such, additional trials are needed to clarify the role of adjuvant immunotherapy in this disease space,” the authors wrote.

What’s next? “Biomarker work is underway to determine whether tumor genomic characteristics or circulating biomarkers can identify patient populations who derive benefit from adjuvant atezolizumab,” Pal and associates wrote. “There is precedent for tissue-based adjuvant therapy selection in other diseases, such as HER2-based and endocrine receptor–based approaches in breast cancer and EGFR mutation–directed therapy in lung cancer.”