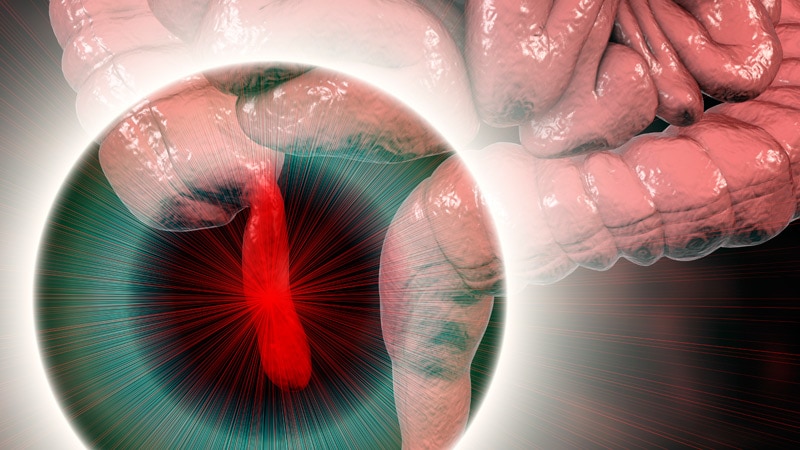 Patients who were more confident that antibiotics could treat appendicitis appeared less likely to undergo surgery for this condition than those who expressed more reservations about this approach, according to a further analysis of data from a landmark trial on this question.

David R. Flum, MD, MPH, of the University of Washington, and colleagues delved into the data from the Comparison of Outcomes of Antibiotic Drugs and Appendectomy (CODA) to see how patients’ beliefs about treatment options may have affected their outcomes.

In 2020, topline results from Flum and colleagues’ CODA trial showed antibiotic therapy to be noninferior to appendectomy, as assessed on the basis of a standard health-status measure. In the antibiotics group, almost 3 in 10 participants — 29% — had undergone appendectomy by 90 days, meaning the majority had at least temporarily avoided this surgery.

In an article published in JAMA Surgery, Flum and colleagues reported on their analysis of a survey taken of CODA participants’ views on antibiotics and their outcomes. Of the 776 study participants assigned antibiotic treatment in CODA, 425 patients who were unaware of their treatment assignment at the time of the baseline survey were included in this analysis.

These trends continued at the 30-day mark.

The cumulative incidence of appendectomy then in the group with the greatest belief in antibiotics was 14%, while it was 19% in those with an intermediate belief in this approach and 26% of those who were most unsure.

Before taking the survey, study participants received a standardized set of materials, including either a pamphlet or a video, which explained the outcomes and risks seen in previous studies of treating appendicitis with antibiotics or appendectomy.

“The study is about how much the patient believes that antibiotics are going to work for them and how much that plays out in whether or not antibiotics actually can work without resulting in an appendectomy,” Flum told Medscape Medical News. “And it turns out, it’s pretty important.”

But in an invited commentary on the study, John C. Alverdy, MD, of the University of Chicago, cautioned against claims of a firm link between belief in antibiotics and outcomes. Alverdy calls this secondary analysis of the CODA study, which focused on belief, “well-done,” but challenges it as a basis for drawing conclusions.

Alverdy notes that Flum and colleagues recognized that “a purely descriptive study such as this cannot clarify whether an observed association implies causation.” Instead the “hard work needed to support mechanistic plausibility to this claim, as they acknowledge, remains to be produced,” Alverdy writes.

“Unless we insist on complementary biology-level measurements and hard mechanistic-based evidence to support our clinical observations, it seems we are no better than homeopathic claims that declare ‘if you think you are better, then you are better,’ ” Alverdy writes.

Other researchers saw the new Flum article as further evidence of the need for shared decision-making.

Harlan Krumholz, MD, SM, director of the Center for Outcomes Research and Evaluation (CORE) at Yale New Haven Hospital, called the new CODA analysis a “fascinating study that shows that what people believe about the efficacy of a treatment may affect the success of that treatment.”

This work reinforces the need to listen to patient preferences and recognize that their beliefs may influence their outcomes, wrote Krumholz, who also is the Harold H. Hines, Jr, Professor of Medicine at Yale School of Medicine, in an email to Medscape.

“The findings strengthen the case for shared decision making as in situations where there is not one best approach, the best strategy may be the one that you believe in,” wrote Krumholz. “There is a lot more to learn, but these findings are intriguing and sure to elicit more research about the potential mechanisms.”

Erica Spatz, MD, MHS, director of the preventive cardiovascular health program at the Yale School of Medicine, told Medscape that the study’s findings reflect what physicians see in practice. Like Krumholtz, Spatz has studied the ways physicians can help patients better understand risks and benefits of treatments.

“As doctors, we know this from experience: patients who are very clear about not wanting a particular therapy or surgery, and yet are convinced to go along with the treatment, are usually the ones who suffer a devastating outcome,” wrote Spatz to Medscape. “Conversely, patients who believe in a given treatment tend to do well.

“Armed with good information, patients can choose what is best for them,” she added. “This study supports the imperative to engage patients in shared decision making; doing so may not only result in a better experience and less decisional regret, but also may improve outcomes.”

The CODA trial sparked the creation of a website, AppyOrNot.org, which offers videos in several languages that explain in simple terms the potential benefits and drawbacks of the options for appendicitis. Development of AppyOrNot.org was supported by the National Institute of Diabetes, Digestive, and Kidney Diseases and the Patient-Centered Outcomes Research Institute (PCORI).

PCORI is an organization created by the Affordable Care Act of 2010 to fund research aimed at improving the practice of medicine, including studies weighing the merits of different options available for patients. It also funded the CODA study and is now supporting the Treatment Individualized Appendicitis Decision Making (TRIAD) program, which is intended to further spread the message about antibiotics as an alternative to surgery.

The CODA study has already made a mark on medicine. The national guidelines for appendicitis care by the American College of Surgeons now say that “antibiotics are an accepted first-line treatment,” PCORI said. But there are still hurdles to their use, such as a lack of information among patients and physicians about the use of antibiotics to treat appendicitis. TRIAD is intended to address these issues through further education. It is slated to run at 15 hospitals, with an aim of involving more than 2500 patients.

Flum told Medscape that among the challenges in treating people for appendicitis are the long-standing misconceptions about this condition. There are still lingering effects of the older “ticking time bomb” depiction of appendicitis. Over the years, many popular television medical dramas have depicted the condition as a crisis.

So physicians may have to help their patients understand the evidence from studies about antibiotics as an effective treatment.

“If we did that, we’d have fewer people ending up with an appendectomy after starting antibiotics,” Flum said. “That’s the take-home message.”

The study was supported by grants from the Patient-Centered Outcomes Research Institute, the National Institute of Diabetes and Digestive and Kidney Diseases of the National Institutes of Health, the Agency for Healthcare Research and Quality, and the University of Washington. The authors have reported financial relationships with various companies and organizations, which are listed in the original article.

Kerry Dooley Young is a freelance journalist based in Miami Beach. She earlier covered health policy and the federal budget for Congressional Quarterly/CQ Roll Call and the pharmaceutical industry and the US Food and Drug Administration for Bloomberg. Follow her on Twitter @kdooleyyoung.