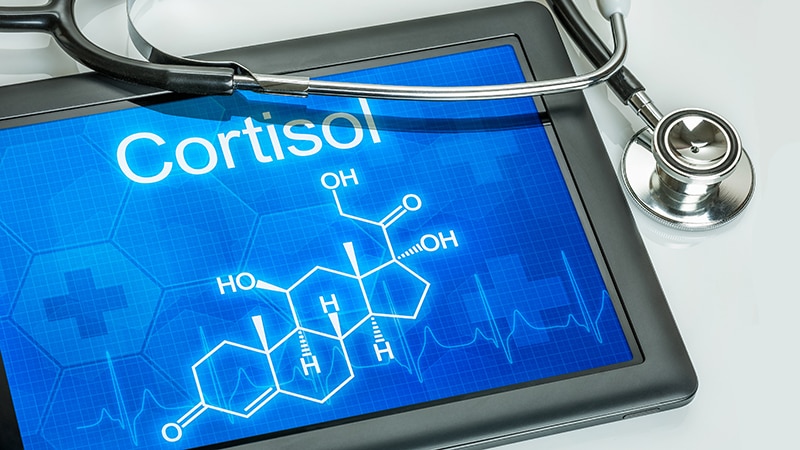 In more than 15% of people with benign adrenal tumors, the growths produce clinically relevant levels of serum cortisol that are significantly linked with an increased prevalence of hypertension and, in 5% of those with Cushing syndrome (CS), an increased prevalence of type 2 diabetes, based on data from more than 1300 people with benign adrenal tumors, the largest reported prospective study of the disorder.

The study results showed that mild autonomous cortisol secretion (MACS) from benign adrenal tumors “is very frequent and is an important risk condition for high blood pressure and type 2 diabetes, especially in older women,” said Alessandro Prete, MD, lead author of the study which was published online January 3 in the Annals of Internal Medicine.

“The impact of MACS on high blood pressure and risk for type 2 diabetes has been underestimated until now,” said Prete, an endocrinologist at the University of Birmingham, UK, in a written statement.

Results from previous studies “suggested that MACS is associated with poor health. Our study is the largest to establish conclusively the extent of the risk and severity of high blood pressure and type 2 diabetes in patients with MACS,” said Wiebke Arlt, MD, DSc, senior author and director of the Institute of Metabolism & Systems Research at the University of Birmingham.

All patients found to have a benign adrenal tumor should undergo testing for MACS and have their blood pressure and glucose levels measured regularly, advised Arlt in the statement released by the University of Birmingham.

The new findings show that MACS “is more common and may have a more negative impact on health than previously thought, including increasing the risk for type 2 diabetes,” commented Lucy Chambers, PhD, head of research communications at Diabetes UK. “The findings suggest that screening for MACS could help identify people — particularly women, in whom the condition was found to be more common — who may benefit from support to reduce their risk of type 2 diabetes.”

The study included 1305 people with newly diagnosed, benign adrenal tumors greater than 1 cm, a subset of patients prospectively enrolled in a study with the primary purpose of validating a novel way to diagnose adrenocortical carcinomas. Patients underwent treatment in 2011-2016 at any of 14 tertiary centers in 11 countries.

Researchers used a MACS definition of failure to suppress morning serum cortisol concentration to less than 50 nmol/L after treatment with 1 mg oral dexamethasone at 11 PM the previous evening in those with no clinical features of CS.

Roughly half of patients (n = 649) showed normal cortisol suppression with dexamethasone, identifying them as having nonfunctioning adrenal tumors, and about 35% showed possible MACS based on having moderate levels of excess cortisol.

There was a clear relationship between patient sex and severity of autonomous cortisol production. Among those with nonfunctioning adrenal tumors, 64% were women, which rose to 74% women in those with definitive MACS and 86% women among those with CS. The median age of participants was 60 years old.

Higher levels of excess cortisol were also directly linked with an increased need for treatment with three or more antihypertensive agents to control blood pressure. Those with definitive MACS had a significant 31% higher rate of being on three or more drugs, and those with overt CS had a greater than twofold higher rate.

The findings show that “people with definitive MACS carry an increased cardiometabolic burden similar to that seen in CS even if they do not display typical features of clinically overt cortisol excess,” the authors write in the report.

Even among those with apparently nonfunctioning tumors, each 10 nmol/L rise in cortisol level during a dexamethasone-suppression test was associated with a higher cardiometabolic disease burden. This observation suggests that current diagnostic cutoffs for the suppression test may miss some people with clinically relevant autonomous cortisol secretion, the report said. The study findings also suggest that people with benign adrenal tumors show a progressive continuum of excess cortisol with clinical consequences that increase as levels increase.

Determine the Consequences of Cortisol Secretion

“These data clearly support the European Society of Endocrinology guideline recommendations that clinicians should determine precisely the cardiometabolic consequences of mild cortisol secretion in patients with adrenal lesions,” writes André Lacroix, MD, in an accompanying editorial.

But Lacroix included some caveats. He notes the “potential pitfalls in relying on a single total serum cortisol value after the 1 mg dexamethasone test.” He also wondered whether the analysis used optimal cortisol values to distinguish patient subgroups.

Plus, “even in patients with nonfunctioning adrenal tumors the prevalence of diabetes and hypertension is higher than in the general population, raising concerns about the cardiometabolic consequences of barely detectable cortisol excess,” writes Lacroix, an endocrinologist at the CHUM Research Center and professor of medicine at the University of Montreal, Quebec, Canada.

The study received no commercial funding. Prete, Chambers, and Lacroix have reported no relevant financial relationships. Arlt is listed as an inventor on a patent on the use of steroid profiling as a biomarker tool for the differential diagnosis of adrenal tumors.