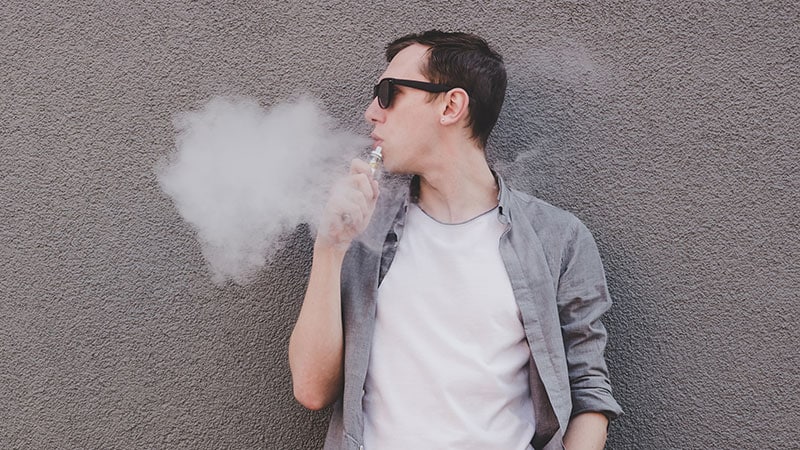 People who vape may be putting themselves at risk of developing gum disease, according to findings from a new study published recently in JAMA Network Open.

The research, using data from the National Institutes of Health, also confirmed long-known associations between the use of cigarettes, cigars, and hookahs with developing oral health problems like gum disease, precancerous lesions in the mouth, and loose teeth.

“Electronic nicotine delivery devices may be associated with negative gum disease outcomes, which hasn’t been looked at before,” said Wilson M. Compton, MD, MPE, deputy director of the National Institute on Drug Abuse, and a co-author of the study.

Because vaping devices are a relatively new product in the United States, the investigators were unsure what harmful effects, if any, on oral health would be associated with the products. They interviewed participants in the NIH’s ongoing Population Assessment of Tobacco and Health Study (PATH) in segments, with four 1-year waves and one 2-year wave from 2013 to 2019.

More than 10,000 participants interviewed between waves 3 and 4 reported that they did not have prior history of gum bleeding after brushing or flossing.

When researchers followed up with these people during waves 4 and 5, they found that those who vaped were 27% more likely to say that their gums now bled after brushing or flossing than those who did not use e-cigarettes (adjusted hazard ratio [AHR],1.27 [95% CI, 1.04 – 1.54; P = .02]). Bloody gums can be a sign of oral infection and can lead to gum deterioration, receding gums, and loss of teeth, Compton said.

As other studies have shown, smoking tobacco in various forms also was linked to significant problems with oral health in the near-term.

As tobacco products clearly harm dental health and carry a litany of other adverse health outcomes, Compton said primary care doctors and other clinicians could recommend vapes as cigarette cessation tools, but with one caveat: E-cigarettes should be used only as a last resort if products like nicotine patches or gums don’t work for patients.

“If it’s a choice between resuming cigarettes or continuing vaping, that seems a fairly straightforward question: vaping has so much lower exposure to toxic chemicals that the trade-off seems quite clear, and it’s positive,” Compton said.

People who use vapes as cessation devices likely need to eventually wean themselves off the products, just like they might with other tools like gums or patches. But scant recommendations exist for how long vapes can safely be used as cessation tools. Compton said new PATH data coming in January should help researchers better understand the long-term outcomes of people who use vapes.

Eric Scharf, DDS, an oral and maxillofacial surgeon at 7×7 Dental Implant and Oral Surgery Specialists in San Francisco, said the scientific evidence on the effects of electronic nicotine delivery systems on oral health has not been able to keep pace with the surge in popularity of the devices over the last decade.

“What we are seeing is that aerosols in these vaping systems do contain toxicants and carcinogens,” Scharf said. “Even if they are at lower levels than traditional tobacco, we still don’t know what long-term effects this can have on oral health such as periodontal disease and oral cancer.”

Jenna Fletcher is a freelance writer. She holds a bachelor’s degree from Muhlenberg College.