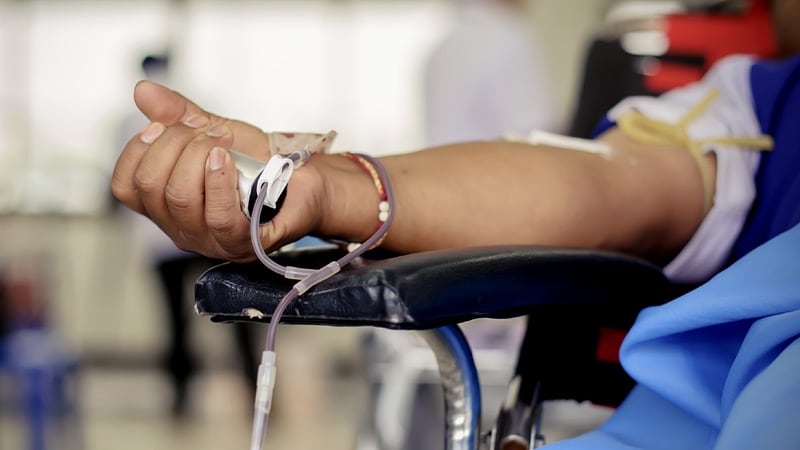 United States senators and LGBTQ+ advocates are calling on the FDA to remove restrictions that add obstacles for blood donations from men who have sex with men, as the American Red Cross deals with a blood shortage it called the worst in more than a decade.

Since 1985, the FDA has refused to accept blood donations from men who have sex with men, a decision born from fears during the AIDS crisis. The first restriction placed a lifetime donation ban on any man who had sex with a man after 1977. In 2015, the FDA modified the restriction to allow gay and bisexual men to donate blood if they were abstinent for a year.

With an influx of hospital patients during the COVID-19 pandemic, the FDA in 2020 changed the restriction to 3 months of abstinence.

In January, the American Red Cross declared the worst blood shortage in over a decade, noting that 10% fewer people have been donating blood since the start of the pandemic. Meanwhile, hospitals have been flooded with patients; the Red Cross said it can provide only 75% of the blood requested by some hospitals.

Twenty-two senators believe a partial solution is removing the blood donation restrictions on gay and bisexual men entirely and sent a letter to the FDA on Jan. 13 asking it to remove the abstinence restriction.

“Right now, the United States is facing a national blood supply crisis, and I am once again urging the FDA to follow the most up-to-date scientific evidence and consensus among the medical community that does not support their unnecessary restrictions on blood donations,” said Sen. Tammy Baldwin, D-WI., the first openly lesbian member of the Senate.

She led the group of senators who sent a letter to the FDA in mid-January. Baldwin has consistently called on the FDA to end the policy since being elected to the Senate in 2012.

In the letter, the senators noted that “all over the world, other countries have led on this issue by scrapping their discriminatory blood donation policies. In October of last year, Israel removed all restrictions on MSM [men who have sex with men] blood donation. And just last month, Canada’s blood regulatory agency proposed removing all screening questions focused on gender and sexuality.”

Baldwin has not received a formal response from the FDA, a spokesperson from her office said.

American Medical Association President Gerald E. Harmon, MD, said in a statement that “it is time for the Food and Drug Administration to do something the AMA and others have urged for years: remove its discriminatory ban that prevents many gay and bisexual men from becoming blood donors.”

While allowing gay and bisexual men to donate blood without a time deferral would not solve the blood shortage crisis right away, LGBTQ+ advocates say it would, at a minimum, increase the amount of blood available.

The FDA is sponsoring a study by the Red Cross, Vitalant, and OneBlood, three of the largest blood donation centers in America, to determine “if a donor questionnaire based on individual risk assessment would be as effective as time-based deferrals in reducing the risk of HIV,” an FDA spokesperson said.

The study is taking place in eight communities around the country, including Washington, DC.

According to Christian Morris, a recruiter at Washington’s Whitman-Walker Health Center, health centers and recruiters are struggling to gather enough people to take part in the study because there are fewer public events at which they can recruit as well as fewer people out in public generally.

Morris said the study was supposed to be completed by summer, but those involved “have only enrolled about half as many people as the total target goal across the United States.”

The FDA does not have a specific date by which the study will be completed, the spokesperson said.

“The FDA has sought public input to collect insights on how we might move to and test alternative deferral strategies, such as individual risk assessment,” the spokesperson said.

Advancements in science have driven changes to the FDA policy, but Morris acknowledged that the fears that drove the FDA to put the lifetime ban in place in 1985 could still exist.

“The study is trying to develop a screening tool that could be mandated across all folks who want to donate blood, that gets towards more specific risk factors for the transmission of HIV and that could be applied to everyone, so it’ll help keep the blood supply safe without being discriminatory,” said Morris.