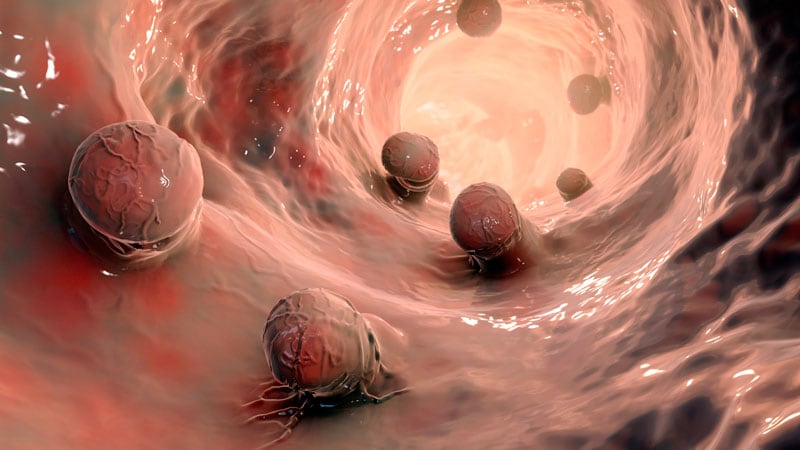 VIENNA ― The real-world risk of colorectal cancer and associated mortality was lower among people who underwent a single screening colonoscopy than among those who did not have a colonoscopy, though only modestly so, the 10-year follow-up of the large, multicenter, randomized Northern-European Initiative on Colorectal Cancer (NordICC) trial shows.

In effect, this means the number needed to invite to undergo screening to prevent one case of colorectal cancer is 455 (95% CI: 270 – 1429), the researchers determined.

The results of the study, which was designed to be truly population based and to mimick national colorectal cancer screening programs, provide an estimate of the effect of screening colonoscopy in the general population.

The primary outcome was determined on an intention-to-screen basis. All persons who were invited to undergo colonoscopy screening were compared with people who received usual care (ie, received no invitation or screening). At UEG 2022, the researchers presented the interim 10-year colorectal cancer risk, which was found to be 0.98%, compared to 1.20%. This represents a risk reduction of 18% among colonoscopy invitees (risk ratio, 0.82; 95% CI: 0.70 – 0.93). During the study period, 259 cases of colorectal cancer were diagnosed in the invited group, vs 622 in the usual-care group.

The authors note that the benefit would have been greater had more people undergone screening; only 42% of those who were invited actually underwent colonoscopy. In an adjusted analysis, had all those who had been invited to undergo screening undergone colonoscopy, the 10-year risk of colorectal cancer would have decreased from 1.22% to 0.84%, and the risk of colorectal cancer–related death would have fallen from 0.30% to 0.15%.

The researchers, led by gastroenterologist, Michael Bretthauer, MD, from the Department of Medicine, Gastrointestinal Endoscopy, University of Oslo, Oslo, Norway, who presented the data at UEG 2022 on behalf of the NordICC study group, acknowledge that despite the “observed appreciable reductions in relative risks, the absolute risks of the risk of colorectal cancer and even more so of colorectal cancer–related death were lower than those in previous screening trials and lower than what we anticipated when the trial was planned.”

However, they add that “optimism related to the effects of screening on colorectal cancer–related death may be warranted in light of the 50% decrease observed in adjusted per-protocol analyses.”

With his co-authors, Bretthauer writes that even their adjusted findings “probably underestimated the benefit because, as in most other large-scale trials of colorectal cancer screening, we could not adjust for all important confounders in all countries.”

Bretthauer also noted that results were similar to those achieved through sigmoidoscopy screening. By close comparison, sigmoidoscopy studies show the risk of colorectal cancer is reduced between 33% and 40%, according to per protocol analyses.

“These results suggest that colonoscopy screening might not be substantially better in reducing the risk of colorectal cancer than sigmoidoscopy.”

NordICC is an ongoing, pragmatic study and is the first randomized trial to quantify the possible benefit of colonoscopy screening on risk of colorectal cancer and related death.

Researchers recruited healthy men and women from registries in Poland, Norway, Sweden, and the Netherlands between 2009 and 2014. Most participants came from Poland (54,258), followed by Norway (26,411) and Sweden (3,646). Data from the Netherlands could not be included owing to data protection law.

At baseline, 84,585 participants aged 55 to 64 years were randomly assigned in a 1:2 ratio either to receive an invitation to undergo a single screening colonoscopy (28,220; invited) or to undergo usual care in each participant country (56,365; no invitation or screening).

“Modest Effectiveness,” but Longer Follow-up to Give Fuller Picture

In an editorial that accompanied publication of the study, Jason A. Dominitz, MD, from the Division of Gastroenterology, University of Washington School of Medicine, Seattle, Washington, and Douglas J. Robertson, MD, from White River Junction Veterans Affairs Medical Center, White River Junction, Vermont, comment on the possible reasons for the low reduction in incident cancer and deaths seen in NordICC.

They point out that cohort studies suggest a 40% to 69% decrease in the incidence of colorectal cancer and a 29% to 88% decrease in the risk of death with colonoscopy. However, they note that “cohort studies probably overestimate the real-world effectiveness of colonoscopy because of the inability to adjust for important factors such as incomplete adherence to testing and the tendency of healthier persons to seek preventive care.”

Referring to Bretthauer’s point about attendance to screening, Dominitz and Robertson add that in the United States, colonoscopy is the predominant form of screening for colorectal cancer and that in countries where colonoscopy is less established, participation may be very different.

The editorialists also point out that the benefits of screening colonoscopy take time to be realized “because the incidence of colorectal cancer is initially increased when pre-symptomatic cancers are identified.” A repeat and final analysis of the NordICC data is due at 15 years’ follow-up.

In addition, they note that “colonoscopy is highly operator dependent” and that the adenoma detection rate is variable and affects cancer risk and related mortality.

However, they also note that “additional analyses, including longer follow up and results from other ongoing comparative effectiveness trials, will help us to fully understand the benefits of this test.”

Also commenting on the study was Michiel Maas, MD, from the Department of Gastroenterology and Hepatology, Radboudumc, Nijmegen, the Netherlands, told Medscape Medical News that he agreed that the absolute effect on colorectal cancer risk or colorectal cancer–related death was not as high as expected and may be disappointing.

But Maas said that “around half of the patients in the study did not undergo colonoscopy, which may have negatively impacted the results.

“An additional factor, which can be influential in colonoscopy studies, is the potential variability in detection rates between operators/endoscopists,” he said.

Looking to the future, Maas noted that “AI [artificial intelligence] or computer-aided detection can level this playing field in detection rates.

“Nevertheless, this is a very interesting study, which sheds a new light on the efficacy on screening colonoscopies,” he said.

Bretthauer has relationshps with Paion, Cybernet, and the Norwegian Council of Research. Dominitz is co-chair of VA Cooperative Studies Program #577: “Colonoscopy vs. Fecal Immunochemical Test (FIT) in Reducing Mortality from Colorectal Cancer” (the CONFIRM Study), which is funded by the US Department of Veterans Affairs. Robertson is National co-chair (with Dominitz) of the CONFIRM trial and has received personal fees from Freenome outside of the submitted work. Maas reports no relevant financial relationships.