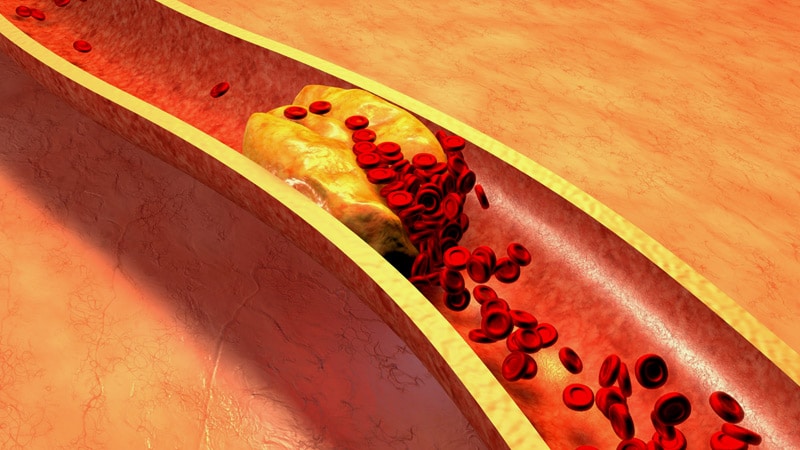 WASHINGTON – Patients with type 2 diabetes and established atherosclerotic cardiovascular disease treated with both an sodium-glucose transporter 2 inhibitor and a glucagonlike peptide–1 receptor agonist had a significant 80% cut in their rate of all-cause death during 1-year follow-up, compared with matched patients treated with an agent from either class alone in an observational, retrospective study of more than 15,000 people in the U.S. Veterans Affairs health system.

For the study’s primary endpoint, the combined rate of all-cause death, nonfatal MI, or nonfatal stroke, combined treatment with both an agent from the sodium-glucose transporter 2 (SGLT2) inhibitor class and from the glucagonlike peptide–1 receptor agonist (GLP-1 RA) class linked with a significant, roughly 50% cut in events during 1-year follow-up, compared with patients treated with an agent from just one of these two classes, Persio D. Lopez, MD, reported at the annual scientific sessions of the American College of Cardiology.

This improvement in the combined endpoint outcome resulted entirely from reduced all-cause mortality. Dual treatment showed no significant association with the incidence of nonfatal MIs or strokes, compared with monotherapy, with rates that were nearly identical regardless of whether patients took one of the agents or both, said Lopez, a cardiologist at Mount Sinai Morningside and the James J. Peters VA Medical Center, both in New York.

“We’re not sure what drives combined use” of agents from both drug classes in these types of patients, admitted Lopez during his talk. “Our hypothesis is that dual treatment is used in patients with harder-to-control diabetes.”

Salim S. Virani, MD, PhD, who practices in the VA system but was not involved with the study, agreed that this is the likely explanation for most instances of high-risk VA patients with diabetes who receive agents from both classes.

“I have a few patients” on both classes, usually “patients with higher starting A1c levels who need greater glycemic control,” said Virani, professor of medicine at Baylor College of Medicine and a cardiologist at the Michael E. DeBakey VA Medical Center, both in Houston.

U.S. use of either drug class, let alone both, in patients with type 2 diabetes is still struggling to gain traction in U.S. practice and remains limited to a minority of these patients, a prescribing pattern reflected in recent VA data. Analysis of more than half a million patients in the VA system with type 2 diabetes and atherosclerotic cardiovascular disease (ASCVD) who received treatment at any of 130 VA medical centers throughout 2020 showed that 11% had received an SGLT2 inhibitor, and 8% a GLP-1 RA.

The most frequently used antidiabetes drug classes in these patients were insulin in 36%, biguanides in 47%, and sulfonylureas in 22%.

These data also showed a striking level of variability among the 130 VA centers, with some of the sites prescribing either an SGLT2 inhibitor or a GLP-1 RA to as few as about 3% each of these patients, while other centers had a roughly 10-fold higher prescription rate for each of about 25%-30% of their patients with type 2 diabetes and ASCVD.

“There will be a lot of interest in combing the two classes. It makes intuitive sense [to treat with both classes] because most patients with diabetes need more than one drug” for glycemic control, he noted. “Why not use two classes that each reduce a patient’s risk” for adverse outcomes involving ASCVD, heart failure, and renal dysfunction, added Virani.

The study run by Lopez and his associates used data collected in the National VA Database and included 121,156 patients with both type 2 diabetes and established ASCVD. Using propensity-score matching the researchers compiled three subgroups that each included 5,277 matched patients. One subgroup had patients prescribed an SGLT2 inhibitor, a second subgroup included patients on a GLP-1 RA, and a third subgroup had patients on agents from both classes. Patient matching relied on age, sex, left ventricular ejection fraction, hemoglobin A1c level, systolic blood pressure, and the presence of coronary artery disease or peripheral artery disease.

Patients included in the analysis averaged about 67 years of age; 97% were men, their average body mass index was about 34 kg/m2, their average A1c was about 7.9%, their average estimated glomerular filtration rate was about 55-66 mL/min per 1.73 m2, and their average left ventricular ejection fraction was about 55%. The database provided a median follow-up of 902 days (about 2.5 years). The prespecified primary endpoint focused on events that occurred during the first year of follow-up, but the investigators also ran a 3-year follow-up analysis on a post hoc basis.

The most common SGLT2 inhibitor received by these patients was empagliflozin (Jardiance), used on virtually everyone who received an agent from this class. In contrast, the GLP-1 RA drugs that patients received split more widely. The most prescribed agent was liraglutide (Victoza), followed by semaglutide (Ozempic), and dulaglutide (Trulicity), with fewer than 5% receiving exenatide (Bydureon, Byetta).

Regarding other treatments, about 97% of all patients received a statin, about 94% were on a renin-angiotensin system inhibitor, about 90% were on metformin, and roughly 75% were on insulin, aspirin, and a beta-blocker, with smaller numbers on other types of agents.

Lopez cautioned that selection bias could have influenced the outcomes of patients who received both classes rather than one or the other, and he also highlighted that the analysis relied on administrative data rather than information gleaned from more detailed medical records or prospectively collected findings and was limited by only including a very small number of women.

“Our results need to be validated in prospective studies,” he declared.

Lopez and Virani had no commercial disclosures.