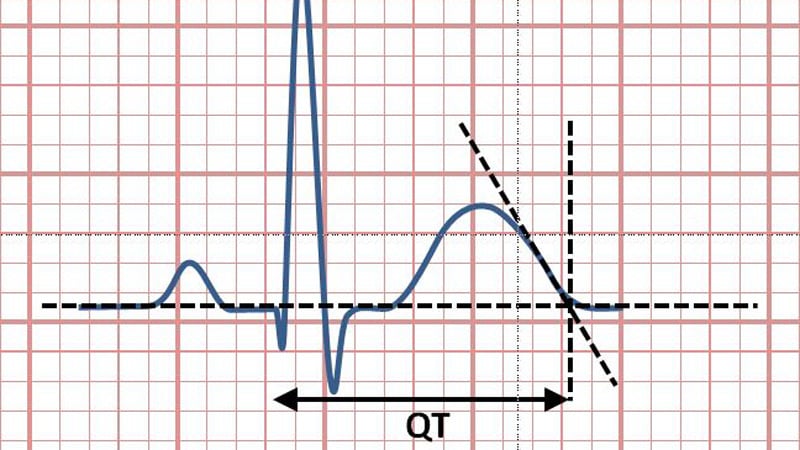 Inappropriate chemotherapy decisions may occur through use of a commonly used formula that overestimates the risk of a cardiac adverse event, warn researchers.

Many cancer drugs carry a risk of QT interval prolongation, which predisposes patients to fatal heart arrhythmias. Because of this risk, cancer patients often undergo electrocardiogram (ECG) monitoring, with special attention paid to the QT interval.

The idea is to catch prolongations early so that drug dosages can be changed to prevent arrhythmias.

Three formulas are in common use for calculating QT intervals corrected for heart rate (QTc), and the mathematics differs between them.

Now, the first study to examine how these formulats affect therapeutic decisions for oncology patients has raised concerns.

After reviewing nearly 20,000 ECGs from cancer patients, investigators at the University of North Carolina at Chapel Hill say it’s time for oncologists to pick one formula to calculate corrected QT intervals and stick with it.

They came to their conclusion after finding that one commonly used formula, the Bazett formula, likely overestimates the incidence of prolonged QT intervals and could lead to inappropriate changes in chemotherapy.

The team, led by Daniel Richardson, MD, found that the Bazett formula was associated with a threefold increase in grade 3 QT prolongation compared with the Fridericia and Framingham formulas, which are also commonly used to monitor ECGs.

With no “clear guidance on how to appropriately calculate QTc, clinical decisions based on prolonged QTc values may vary widely,” depending on which formula is used.

This may “detrimentally affect patient outcomes,” they warn. They suspect that inappropriate withholding of chemotherapy as a result of relying on the Bazett formula “is likely occurring in routine oncology practice.”

The “critical first step to addressing” the problem “is to standardize QTc monitoring practices across oncology,” they suggest.

The study was published September 22 in JAMA Oncology.

Although it has already been known that the Bazett formula overestimates QTc in comparison with the Fridericia and Framingham formulas, it is often the default formula used in ECG software to calculate QTc, something the investigators suspect many oncologists don’t know.

In addition, while drug labeling and adverse event reporting schemes often call for QTc monitoring in oncology, they do not generally recommend one formula over the other.

“In the absence of such a standard, the best formula is one that…minimizes adverse events as well as inappropriate interventions,” say the authors of an accompanying editorial, cardiac electrophysiology fellow Benjamin Starobin, MD, and cardiac electrophysiologist Kevin Kwaku, MD, PhD, both of Dartmouth-Hitchcock Medical Center, Lebanon, New Hampshire.

Although the new investigation adds to the literature, “the ideal study design to address this would need to be prospective, with patients randomized to be managed according to different formulae,” they write.

For their study, Richardson and colleagues calculated and then compared QTc intervals using the Bazett, Fridericia, and Framingham formulas from 19,955 ECGs culled from 6881 adult patients treated at the University of North Carolina Cancer Hospital from 2010–2020.

The differences were “substantially higher than mean differences reported in nononcology populations,” the team notes.

Nine percent of the patients had grade 3 QTc prolongation ― defined as a QTc higher than 500 ms ― according to Bazett, vs only 1.8% with Framingham and 2.8% with Fridericia.

Among 2340 ECGs from 421 patients who received chemotherapy known to prolong the QT interval, 12.5% had grade 3 QTc by Bazett, vs just 2.7% with Framingham and 4.5% with Fridericia.

“While recognizing there is no criterion standard by which to test whether the Bazett formula is ‘correctly’ adjusting the QT for heart rate, our findings demonstrate that there is a distinctly high risk of QTc overestimation with the use of the Bazett formula” for cancer patients, the investigators say.

The team also reviewed 496 ECGs from 142 patients to assess the impact of formula selection on chemotherapy decisions.

A finding of QT prolongation led to withholding, reducing, or discontinuing chemotherapy and/or concomitant QT-prolonging medications in 28 encounters. Five changes (17.9%) were inappropriate according to either the Fridericia or Framingham formula.

“We suspect that this study underestimated the actual number of clinical changes,” including inappropriate changes, because it’s likely some weren’t documented in the clinical records, the investigators say.

Also, in only 6% of encounters was there a record of which QTc formula was used for decision-making.

The study was funded by the National Institutes of Health. Richardson has disclosed no relevant financial relationships. Senior author Joshua F. Zeidner, MD, has received personal fees and/or research funding from a number of companies, including AbbVie, Bristol-Myers Squibb, and Genentech. Kwaku has received personal fees from Biosense-Webster and Janssen and research fees from Boston Scientific.

M. Alexander Otto is a physician assistant with a master’s degree in medical science and a journalism degree from Newhouse. He is an award-winning medical journalist who worked for several major news outlets before joining Medscape and is also an MIT Knight Science Journalism fellow. Email: aotto@mdedge.com.