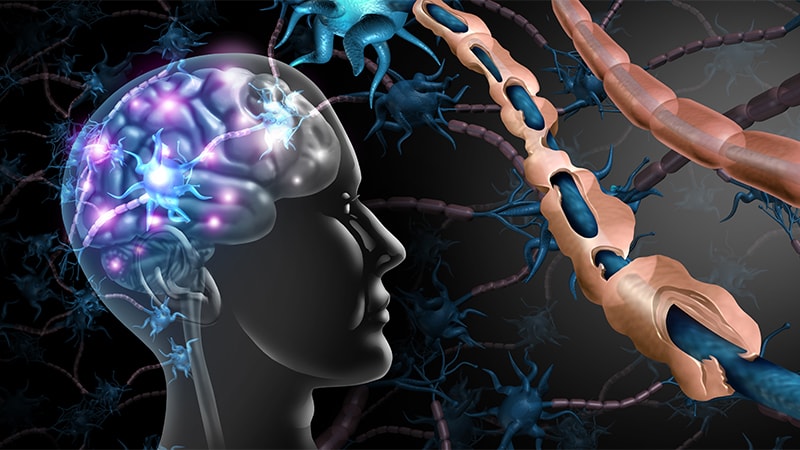 What should you do if a patient with multiple sclerosis suffers an acute relapse, but the standard methylprednisolone treatment does not result in any improvement? As it stands, the guidelines recommend a second cycle of the steroid at a double dose. A German study has now shown that visual, motor, and sensory abilities are retained better through immunoadsorption — an important finding for when updating the current guidelines. [1]

Significant advances have been made over the last 20 years in long-term immunomodulatory therapy of multiple sclerosis. However, the same cannot be said for the treatment of acute relapses, explain Steffen Pfeuffer, MD, and colleagues from the University of Münster in the Journal of Neuroinflammation. Common practice still involves the administration of high-dose intravenous methylprednisolone, 1000 mg daily for 3-5 consecutive days.

However, approximately 25% of patients respond insufficiently to this first cycle. Therefore, guidelines recommend a second, double-dose cycle. Only if that second cycle does not result in any improvement, immunoadsorption (a form of apheresis), is suggested as an alternative.

A Separator Divides Plasma and Cells

Immunoadsorption is an extracorporeal procedure that removes (auto)antibodies and immune complexes to treat autoimmune diseases or solid organ transplant rejections. Plasma is continuously separated from the cellular components of the blood and passed over an adsorber that binds the pathogenic substances. Thus, it is “cleaned” and can be fed back into circulation.

Immunoadsorption has already proved to be a lifesaver when methylprednisolone has failed. Studies in patients with clinically isolated syndrome or relapse-remitting multiple sclerosis produced response rates of up to almost 90%. However, one drawback is that it is an invasive method since it requires a central venous catheter. The costs are also comparatively high.

The mechanisms of action differ too:

Therefore, how does immunoadsorption compare against a second, double-dose cycle of methylprednisolone in terms of safety and efficacy? To know this would be relevant for guidelines, but such a comparison has not been performed to date.

The Disease Had Not Progressed Much Yet

Pfeuffer and his team have now performed this comparison using a prospective observational study. The study involved 42 multiple sclerosis patients from the Department of Neurology, University Hospital Münster, Germany, all still quite young (average age 35 years) and at an early stage of their disease. The patients had already received a first 1000-mg cycle of methylprednisolone for an acute flareup, but without any significant success.

Of these, 26 received a further cycle of methylprednisolone, but this time at 2000 mg daily for five consecutive days. This was accompanied by prophylaxis against gastric ulcers, venous thrombosis, and osteoporosis.

Sixteen patients were allocated to tryptophan column-based immunoadsorption: six sessions within 1 week, in addition to anticoagulation with unfractionated heparin.

A Blinded Battery of Tests

Two neurologists examined the patients prior to immunoadsorption or the second methylprednisolone cycle, respectively, and then at discharge and one time 3 months later, without receiving information about the type of treatment the patients received. The expanded disability status scale (EDSS) score, multiple sclerosis functional composite (MSFC) test, and the SF36 questionnaire to assess health-related quality-of-life were used for evaluation.

The analysis revealed the significant advantages of immunoadsorption over a second, higher-dose methylprednisolone pulse — not just directly after the respective treatments, but also in the follow-up assessment.

Likelihood of a Favorable Outcome Calculated

Upon discharge, the odds ratio for a full or moderate response was 11 in favor of immunoadsorption. This means that patients under immunoadsorption were 11 times more likely to achieve this positive outcome than the reference group under the steroid. In other words: The symptoms fully improved in 19% of these patients, and then not all in an equally large proportion. Whereas for the methylprednisolone, the corresponding values were 4% and 62%. A moderate alleviation of symptoms was experienced by the remaining participants.

At the assessment 3 months later, the researchers were primarily interested in the number of patients who had recovered completely. At this point in time, a patient was 103 times more likely to belong to the top group if they had undergone immunoadsorption. In the methylprednisolone group, 50% were still nonresponders, compared with none under immunoadsorption.

The authors also consider it worth noting that it took longer for a relapse to occur following immunoadsorption than following methylprednisolone administration: a median 104 days compared with 88 days. The most common relapse symptom was optic neuritis.

The EDSS scores did not differ significantly at discharge between each group, but immunoadsorption produced better values at follow-up. On the other hand, the MSFC scores were significantly more favorable at both appointments. Similarly, the information provided by patients in the SF36 questionnaire suggested a better quality of life with immunoadsorption.

The flow cytometry revealed a profound reduction in B-cells following immunoadsorption (from 253/µL to 148/µL) that correlated closely with the clinical improvement, as the researchers discovered. The number of B-cell-related cytokines also dropped.

The researchers therefore surmise that the reduction in B cells and the modulation of their function is an essential mechanism of action for immunoadsorption. In contrast, methylprednisolone had only minimal effects on these cell populations.

Even with measurements of electrical activity in fast-conducting sensory nerve fibers (somatosensory-evoked potentials), the immunoadsorption group fared much better, in the follow-up assessment at any rate.

Improvement Could Also Be Detected in Biomarkers

The level of neurofilament light chains (NfL) in serum reduced significantly with immunoadsorption, but not with methylprednisolone. The NfL structure protein constitutes a main component of neurons’ cytoskeleton. Since the breakdown of myelin sheaths is associated with axonal degeneration, the amount of NfL in serum increases. Hence, the protein is well suited as a marker to monitor the therapy, progression, and relapses of multiple sclerosis.

Immunoadsorption is also more favorable in terms of safety-relevant outcomes. At least one adverse event occurred in 14 out of 16 patients, and most commonly this was hypocalcemia and hypotension. However, the jugular central venous catheter was dislocated in two patients, and a relocation of the catheter from a jugular to inguinal vein was unavoidable in another two patients. In one case, catheter-associated septicemia developed and had to be treated with vancomycin.

Some Serious Side Effects

One patient suffered liver damage and one otherwise healthy 26-year-old suffered osteomyelitis in the left hip with subsequent septicemia, which necessitated a hip replacement.

Three patients developed acute psychosis, but in two of them it regressed within a few days of discontinuing the steroid. However, the other patient had to be admitted to a psychiatric clinic and treated with antipsychotics in the long term.

Regarding these complications, the authors summarize: “The safety of methylprednisolone is questionable, while for immunoadsorption, the use of the central venous catheter requires the utmost care.”

“Generally, both treatments visibly altered cytokine networks. It is unclear whether cytokine levels were affected by the modulation of immune cells. In the context of immunoadsorption, they were simply removed from the circulation by non-specific binding to the tryptophan columns,” write the scientists.

Simply Immunoadsorption Instead of Double Steroid?

As the cause of the immunoadsorption’s limited efficacy, Pfeuffer and colleagues posited that high-dose methylprednisolone modulates the blood–brain barrier and the protein distribution in blood. Since the immunoadsorption was also carried out comparatively late in these patients, the “time window” in which a modulation of the immune system leads to an alleviation of neurological deficits may have also already closed.

“When faced with these results, it should be considered whether in the case of steroid-refractory MS relapses with deficits that are relevant to everyday life, immunoadsorption should follow directly in place of the second steroid therapy that is currently advocated,” said Ralf Gold, MD, PhD, director of the University Neurology Clinic Bochum, Germany, in a report. “The results of the study could therefore have an influence on the guidelines for escalation therapy of an acute MS relapse.”

This content was originally published on Medscape’s German edition.