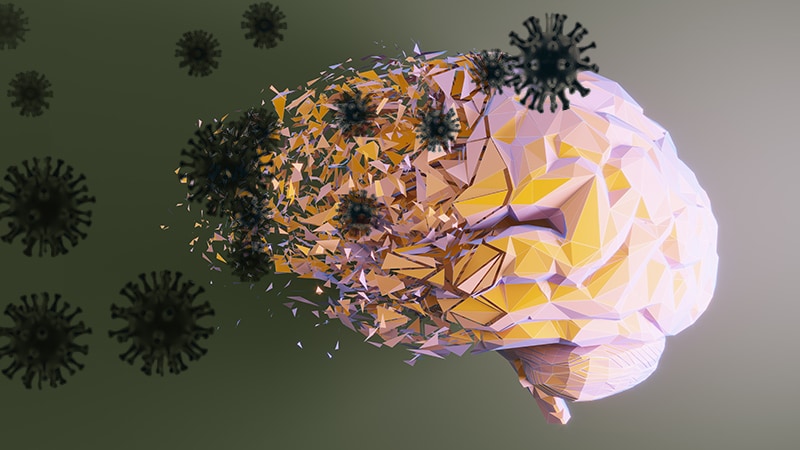 Of those who experienced neurologic events, the most common “by far and away” (51%) was toxic metabolic encephalopathy (TME), said Wisniewski. Other associations included seizures, hypoxic/anoxic injury, and ischemic stroke.

The most common TMEs were septic and hypoxic ischemia. In most patients (78%), TME had more than one cause.

“Unfortunately, both groups had poor outcomes,” said Wisniewski. About 50% had impaired cognition, and 56% experienced limitations in activities of daily living.

However, those patients with COVID-19 who had neurologic sequelae “fared even worse,” said Wisniewski. Compared to control patients, they had twofold worse Modified Rankin Scale scores and worse scores on activity of daily living, and they were much less likely to return to work.

Mechanisms by which COVID-19 affects longer-term cognitive dysfunction are unclear, but inflammation likely plays a role.

The research team compared a number of AD plasma biomarkers in 158 COVID-19 patients who had neurologic symptoms and 152 COVID patients who did not have neurologic symptoms. They found marked elevations of neurofilament light, a marker of neuronal injury, in those with symptoms (P = .0003) as well as increased glial fibrillary acid protein, a marker of neuroinflammation (P = .0098).

There was no difference in levels of amyloid beta 40 (Aβ40) between groups. However, Aβ42 plasma levels were significantly lower in those with neurologic effects, suggesting higher levels in the brain. In addition, the ratio of t-tau to Aβ42 “clearly differentiated the two groups,” he said.

“Serum biomarkers of neuroinflammation and neuronal injury and AD correlate strongly, perhaps suggesting that folks with COVID infection and neurological sequelae may have an acceleration of AD symptoms and pathology,” he said. “That’s something that needs longer follow-up.”

The inclusion of plasma biomarkers in this research is “really critical to tease out what’s the impact of COVID itself on the brain,” said Edelmayer.

“We’re in an era of biomarkers when it comes to Alzheimer’s disease and other dementias, and being able to define those changes that are happening in the brain over time is going to be really critical and aid in early detection and accurate diagnoses,” she said.

What is still to be learned is what these biomarkers reveal long term, said Edelmayer. “Do those biological markers change? Do they go back to normal? A lot of that is still unknown,” she said.

She noted that many diseases that are linked to inflammation produce similar biomarkers in the brain ― for example, neurofilament light.

“But there are still a lot of questions around cause and effect. Is it really a direct effect of the virus on the brain itself? Is it an effect of having an enormous amount of inflammation going on in the body? A lot of that still needs to be teased out,” she commented.

The study was supported by the National Institutes of Health, the Alzheimer’s Association, and the State of New York. Wisniewski has consulted for Grifols, Amylon Pharmaceuticals, and Alzamed Neuro, Inc; 30 NYU patents are related to AD therapeutics.