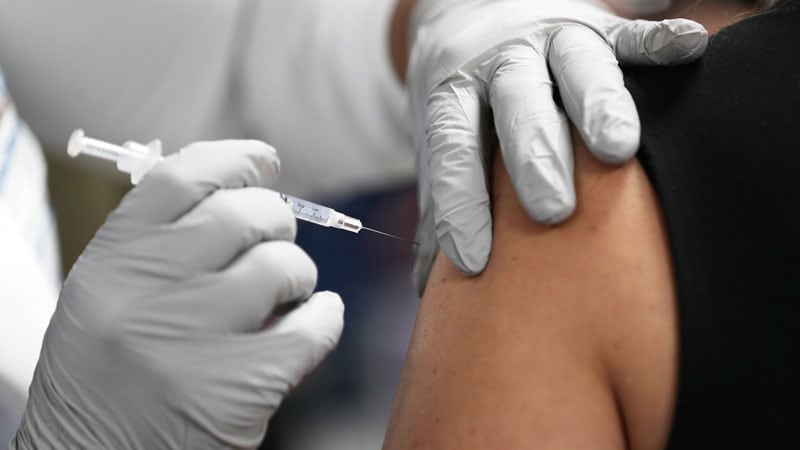 NATIONAL HARBOR, Maryland ― The latest updates on COVID-19 vaccination response among patients with multiple sclerosis (MS) who are treated with disease-modifying therapy (DMT) show that if patients do contract the virus, cases are mild, and serious infections are rare.

One of several late-breaking studies on these issues that were presented at the Consortium of Multiple Sclerosis Centers (CMSC) 2022 Annual Meeting included more than 100 patients with MS who were treated with a variety of DMTs.

Consistent with what has been observed in other studies, “vaccine antibody responses were slightly lower in B-cell-depleted patients than with other therapies,” senior author Rahul Dave, MD, director of the INOVA MS and Neuroimmunology Center, Inova Neurosciences Institute, the University of Virginia College of Medicine, Fairfax, told Medscape Medical News.

The investigators sought to assess detailed vaccine responses in 134 patients with MS. Serum COVID antibody measures were conducted approximately 3 weeks to 4 months after vaccination ― and mostly after the initial vaccination.

The antibody response rate was significantly lower with anti-CD20 treatments (55%) than with all other DMTs examined (83%), including S1Ps, immunomodulators, immunosuppressive drugs, interferon B, anti-CD 52, and natalizumab (P < .01).

The highest prevalence of antibody response was observed among those taking immunomodulators; responses occurred among 91% of patients taking teriflunomide and among 93% of those taking fumarates.

Among those treated with anti-CD20 therapy, antibody responses correlated with higher baseline immunoglobin levels (P = .01) and shorter durations of therapy.

“We found that longer total duration of therapy and lower immunoglobulin levels tended to correlate with decreases in immune responses,” said Dave.

“Interestingly, the timing between vaccination vs administration of [anti-CD20 drug] ocrelizumab did not seem to be impactful with regards to antibody responses,” Dave noted. He added that this is contrary to some past studies that showed benefits if the vaccination could be completed prior to starting ocrelizumab.

Sixteen participants tested positive for COVID-PCR during the previous 12 months. Although most infections were described as mild and self-limited, four of the patients received outpatient monoclonal antibody therapy, and one required hospitalization because of COVID.

“I think it is notable and reassuring that, overall, our patients had mild courses. This is consistent with the vaccines ‘working,’ and is true even in patients on high-efficacy immunosuppressants that partially abrogate antibody responses,” Dave said.

He added that he reassures patients who need high-efficacy therapies that “they should use them.”

That being said, as in the general population, even vaccinated patients can get COVID, he noted. “You can be sick and feel terrible, but in general, hospitalization numbers are way down compared to 2 years ago. We are seeing the same trends in MS patients, including the B-cell-depleted patients,” he added.

“To get at the question whether B-cell-depleted patients behave exactly the same as the general population, or even [with] other DMTs, we will need large, multicenter, prospective datasets,” said Dave.

The concern is in regard to their unique mechanisms of sequestering circulating lymphocytes, particularly the older, nonselective S1P receptor modulator fingolimod, said the author of one of the studies, Daniel Kantor, MD, president emeritus of the Florida Society of Neurology and founding president of the Medical Partnership 4 MS+.

“It appears the issues with fingolimod might relate to the level of white blood cell sequestration, [which is] greater in fingolimod than the newer S1P receptor modulators, and/or the result of S1P4 receptor modulation, which is not seen with the newer, selective medications,” Kantor told Medscape Medical News.

In a prospective observational trial of patients with RMS, among 30 participants who were treated with ozanimod, the mean increase in IgG antibody titer 4 weeks after either of the two available mRNA vaccines was 232.73 AU/mL, vs a mean increase of 526.59 AU/mL among 30 non-ozanimod/DMT-treated patients.

To date, only three patients in the study were taking ocrelizumab; for those patients, the mean increase in IgG titers was 0.633.

Despite the lower antibody titers in the ozanimod-treated patients, which Kantor noted are generally regarded as protective, all but one of the patients had positive results on T-Detect, which was indicative of vaccine protection.

“In this study, RMS patients treated with ozanimod had an antibody and T-cell response to the mRNA COVID-19 vaccines,” he reported. “This trial is ongoing, with 48 weeks of follow-up expected in December 2022.”

In the other S1P modulator-related late-breaking study, Janssen Research and Development reported on antibody responses of patients who were treated with the S1P drug ponesimod in the phase 2 AC-058B202 study.

The median exposure to ponesimod at time of vaccination was 10.7 years (range, 9.8 – 11.8 years). There were 134 patients in the study. Of those, both prevaccination and postvaccination blood samples from 49 patients were tested for spike antibody concentrations.

Twenty participants reported having had prevaccine COVID, while 17 had postvaccination COVID.

None of the cases were serious, severe, or fatal, and none led to permanent treatment discontinuation.

“In patients with RMS on ponesimod, the majority (>80%) appear to develop a measurable SARS-CoV-2 humoral response after COVID-19 vaccination,” the authors, led by Janice Wong, of Janssen Research and Development, LLC, write.

“Further investigations on the efficacy and safety of COVID-19 vaccination in MS patients on ponesimod are warranted,” they add.

“We can conclude from this study that the characteristics of people with MS with more severe COVID-19 outcomes resemble those observed in the general population,” such as in those who are older or have higher rates of comorbidities, Preeti Bajaj, team lead of HEOR, Neuroscience at Genentech, told Medscape Medical News.

“We believe [ocrelizumab] treatment decisions should be made between a patient and their treating neurologist or other medical professional based on a benefit-risk assessment specific to the individual patient,” Bajaj said.

Commenting for Medscape Medical News, Bruce A. C. Cree, MD, PhD, professor of clinical neurology and clinical research director at the University of California, San Francisco, Weill Institute for Neurosciences, described the overall data on vaccine efficacy on anti-CD20s as “discouraging” and said he is adjusting his own recommendations for these patients.

“Repeated vaccinations do not seem to stimulate humoral responses in B-cell-depleted patients,” said Cree, who was not involved with the research.

“In my personal practice, I have been suspending dosing in my patients to allow for B-cell reconstitution to occur followed by revaccination,” he added.

Regarding the S1P drugs, he noted that aside from fingolimod, “the antibody response frequency seems to be better than initial reports. However, the index values are low and may not be protective.”

Overall, the take-home message for patients with MS who are taking DMTs should be, “all patients treated with S1P modulators or anti-C20 antibodies should be vaccinated and boosted,” Cree said.

“In some cases, temporary interruption of treatment might be useful to help develop robust responses to vaccinations,” he added.

Dave reported no financial relationships regarding the poster but is a paid speaker/consultant for Novartis, BMS, EMD Serono, Biogen, Alexion, Genentech, Horizon, and Sanofi for their MS & NMO therapies. Kantor’s research was supported by a grant from BMS; he is a consultant for Biogen, BMS, and Janssen. Cree reported that he is an unpaid ($0) consultant for BMS, the manufacturer of ozanimod.