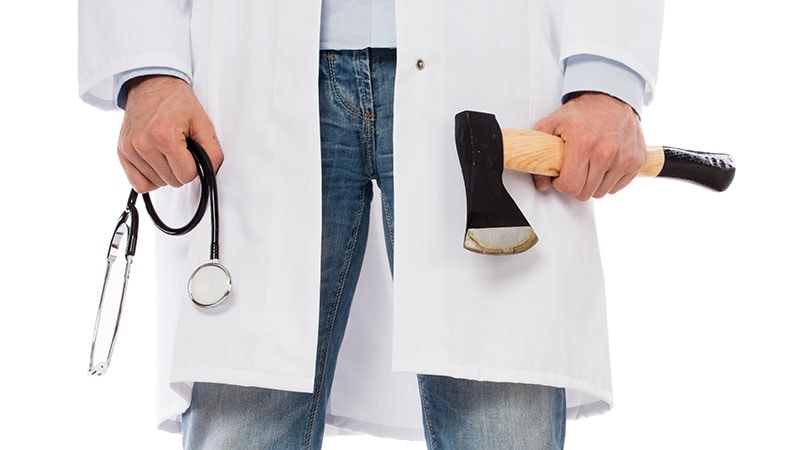 Today’s healthcare professionals run the very real risk of being sued. This is especially true when a patient dies unexpectedly. But many times, doctors find that they’re defending themselves against very serious charges, such as murder and attempted murder.

In Mexico, a physician can be wrongfully accused of such crimes, as was Azucena Calvillo, MD, last year in Durango. The case drew much media attention, and the accusations were so implausible and ridiculous that the charges were dropped and the case was dismissed.

There are instances in which the authorities create a circuslike atmosphere by making farcical and false accusations against healthcare professionals. Still, there are medical murderers — and these killers are among the most difficult to identify. As John E. Douglas put it, “Medical murderers (physicians, nurses, elder care workers) can have a long list of victims, longer than other kinds of serial killers.” Ted Bundy, one of the most written-about serial killers, confessed to 30 murders. The cases discussed below involve from 60 to 200.

Douglas was a special agent with the US Federal Bureau of Investigation (FBI). He is the author of Mindhunter, a nonfiction crime book in which he recounts the early days of the FBI’s Behavioral Science Unit and how he and his colleagues began to study the criminal profiles of serial killers. The book has been adapted into a Netflix TV series of the same name.

He is also one of the authors of Crime Classification Manual: A Standard System for Investigating and Classifying Violent Crime. In this book, there are descriptions of criminal profiles of medical murderers.

According to the authors, there are two types of medical murders: pseudo-mercy homicide and pseudo-hero homicide. Each type is associated with a different motive. In the former, the murderers believe that they’re alleviating the patient’s suffering; in the latter, the murderers create a medical emergency so that they can play the hero in what they know will be an unsuccessful attempt to save the patient’s life.

An example of pseudo-mercy homicide is the infamous case of Harold Shipman, MD, who was convicted of killing 15 people, although an investigation found that more than 200 persons, and possibly as many as 250, died at his hands. In Prescription for Murder: The True Story of Dr. Harold Frederick Shipman, biographer Brian Whittle writes that the general practitioner is England’s (if not the world’s) most prolific serial killer. Shipman is the only physician in that country’s history to have been convicted of killing his patients.

His modus operandi? Injecting morphine. Most of his victims were elderly women. And though unconfirmed, his youngest victim may have been only 4 years old. It was the death of 81-year-old Kathleen Grundy that led to the physician’s arrest. Her family became extremely suspicious when they learned that her will named Shipman as the beneficiary of her entire estate.

He always denied being involved in the murders, for which authorities have yet to determine a motive. The speculation is that he enjoyed watching people die. Almost none of the cases attributed to Shipman involved a critically ill individual with a life-threatening condition. Therefore, his acts were not real acts of mercy. He would make a house call to carry out a routine visit. Once in the patient’s home, he would inject a lethal dose of morphine. Sometimes, relatives and physicians alike would be struck by the strange turn of events.

In 2004, Shipman committed suicide in prison. His case led to numerous changes to British law with respect to the use of controlled substances, the issuance of death certificates, and the procedure for reporting healthcare staff suspected of engaging in illegal activities. Biographer Whittle concluded, “It is very unlikely that the world will ever see another physician as unrelentingly wicked as Dr Shipman.”

The pseudo-hero creates serious situations, generally by administering drugs, and then tries to save the patient. Douglas presents a terrifying case study: Genene Jones, a nurse known as the “Angel of Death.”

Many of Jones’ colleagues considered her an excellent nurse, an expert at handling unexpected emergencies. If a child died while she was on duty, she would sometimes accompany their body to the morgue. She would even sing children’s songs to their lifeless body. When people started to question the number of deaths that were occurring during her shifts, the staff stood up for Jones, saying that it was because she took on the most serious cases.

Jones was found out when a vial of succinylcholine went missing. After it was located, a physician, who had been suspicious of the nurse, noticed that there were two puncture holes in the stopper. None of the staff could offer any explanation. A few days before this event, that same physician had left a healthy 15-month-old girl in Jones’ care. Within a few minutes, the child was showing signs of paralysis and started to have seizures. It appears that Jones had used succinylcholine to make it appear that the children were sick or were experiencing some sort of emergency so that she could then attempt to save them, and they could die in her arms.

This case highlights the need for mortality review committees and for proper statistical analysis to discern trends in deaths and complications among patients. Genene Jones was convicted of killing the 15-month-old girl and was sentenced to 99 years in prison. Authorities suspect that the nurse was responsible for the deaths of up to 60 children.

Through the podcast and subsequent TV series Dr. Death, many people have come to know of a more recent medical murderer: Christopher Duntsch, MD, PhD. The Texas neurosurgeon killed at least two patients, and his actions left several others with adverse outcomes and serious injuries.

These acts occurred during surgical procedures. Witnesses said that the deaths and injuries were the result of unprecedented, egregious negligence, as though the operations had been performed by someone who had never been trained in the specialty. This is something that resonates very strongly for those who are aware of what’s going on in Mexico, where it’s well known that many physicians who lack specialty training perform operations (mainly cosmetic surgery). No doubt cases such as Duntsch’s are more frequent in Mexico.

What makes the situation in the United States involving Christopher Duntsch so astonishing is that it resulted from a perfect storm of a physician whom some colleagues described as a “sociopath” and legal loopholes in the country’s healthcare system. Apparently, during his residency, Duntsch never developed the skills necessary to perform operations. He spent more time carrying out research and engaging in other activities than in participating in the operating room. This is a case that calls into question the way specialists are trained, as it seems that what matters is not how much time they’re spending inside the hospital but what they’re doing and learning there.

Duntsch’s license was suspended and then permanently revoked. He is currently serving a life sentence. Through the podcast or the TV series, one comes to realize that it’s not easy to catch medical murderers. They are among the most difficult to identify — serial killers who commit numerous homicides before they are captured. Reading about the case of Christopher Duntsch, one might ask, What’s his criminal profile: pseudo-hero? Pseudo-mercy? It is hard to say. Maybe his is a different kind of profile — one that will open a new chapter in the books on medical murderers.

Sarmiento studied medicine and did his residency in anatomic pathology, internal medicine, and clinical hematology. He went on to study at Central University City Campus Law School, National Autonomous University of Mexico. He now runs a law firm that, among other things, advises physicians on matters of civil liability, administrative processes, and the legal implications of practicing medicine.