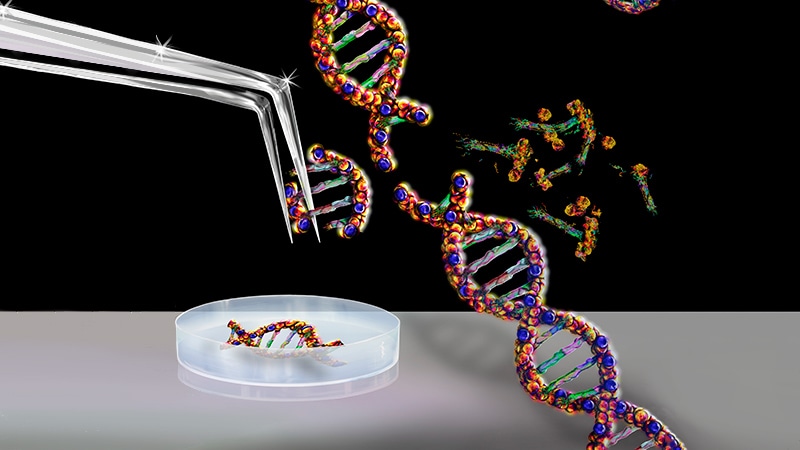 Serum levels of the disease-causing TTR protein were reduced by at least 90% at day 28 with a single infusion of NTLA-2001 at two different doses, with reductions sustained across 4 to 6 months’ follow-up.

“These data further support and extend the early findings demonstrating the promise of CRISPR-based in vivo genome editing in humans,” said Julian Gillmore, MBBS, MD, PhD, who is leading the study at University College London.

“More specifically, the deep TTR reductions observed in patients with ATTR amyloidosis in this study provide a real possibility of genuine clinical improvement in a condition that has hitherto been ultimately progressive and invariably fatal,” he said.

The results were reported in a late-breaking session at the American Heart Association (AHA) Scientific Sessions 2022.

An estimated 50,000 people worldwide are thought to have hereditary ATTR and up to 500,000 to have wild-type ATTR amyloidosis. Amyloid cardiomyopathy is underdiagnosed and fatal in 3 to 10 years without treatment. Current treatment options only slow progression and require lifelong administration, he said.

Results reported last year from the polyneuropathy arm of the study were hailed as a breakthrough and further proof-of-concept that CRISPR could be used to treat other diseases.

CRISPR gene editing has shown success, for example, in β-thalassemia and sickle cell disease but involved stem cells extracted from patients’ bone marrow, edited in the lab, and then replaced.

NTLA-2001 (Intellia Therapeutics/Regeneron) is an in vivo treatment that uses lipid nanoparticles containing messenger RNA for Cas9 and a single-guide RNA targeting TTR in the liver, where it’s almost exclusively produced.

During follow-up out to 6 months, TTR reductions averaged:

Eight patients reported mild or moderate adverse events, and 2 patients experienced transient infusion reactions, including one grade 3 reaction in the 0.7 mg/kg NYHA class III group that resolved without clinical consequence. This group was expanded to 6 patients per study protocol. No additional treatment-related adverse events higher than grade 1 were reported, and no further dose escalation was undertaken, Gillmore reported.

There were no clinically relevant laboratory findings; 1 patient had a transient grade 1 liver enzyme elevation.

One disadvantage of CRISPR is the potential for off-target effects, but Gillmore said in an interview that the drug developers went through a “very rigorous process when selecting the guide RNA, which is what really targets the specificity of the TTR gene.”

“That’s a really, really important point,” he said. “When they did various studies using, for example, primary human hepatocytes, they found no evidence of off-target editing at concentrations of NTLA-2001 threefold greater than the EC90, the concentration at which one knocks down the protein by 90%. So, what we can say at the moment, is the specificity of NTLA-2001 for the TTR gene seems to be absolute.”

In terms of other challenges going forward, Gillmore added, “I think that it’s really to see whether the knockdown that is being achieved is going to translate into greater clinical benefit.”

Nevertheless, there has been an unmet need to develop therapies that can halt or reverse disease, are effective in advanced ATTR, and have an improved route or frequency of administration, given that this is a chronic disease, he said.

Alexander noted that the reductions of greater than 90% were achieved with higher doses than used in the polyneuropathy arm reported last year but were well tolerated in patients that for the most part had wild-type ATTR (83%) and reflect the wild-type ATTR population in practice. “The data support consideration for subsequent efficacy trials for this compound.”

Unanswered questions in ongoing ATTR trials are whether TTR reductions translate into improved clinical outcomes, the long-term safety of TTR lowering, and the efficacy of NTLA-2001, particularly in higher-risk patients, such as those in NYHA class III and those with hereditary ATTR, Alexander said.

During a media briefing earlier in the day, invited discussant Kiran Musunuru, MD, University of Pennsylvania, Philadelphia, pointed out that in the recent APOLLO-B trial of patisiran, patients with ATTR amyloidosis with cardiomyopathy had an average 87% TTR reduction but need intravenous infusions every 3 weeks for the rest of their lives.

“In contrast, gene editing is a one-and-done proposition,” he said. “You receive a single treatment that turns off the TTR gene permanently and the effects are durable and likely last a lifetime.”

Musunuru noted that patients who received patisiran also had significantly and substantially better functional capacity and quality of life compared with those who received placebo. “Based on today’s results, we can expect in future clinical trials for gene editing to have the same beneficial effects and possibly a mortality benefit as well.”

Today’s study is also important because it is part of the first wave of putting CRISPR into the body for an array of diseases, he commented.

“TTR gene editing stands out because it’s the very first CRISPR trial to show unequivocal success — you see that with a greater than 90% reduction in TTR,” Musunuru said. “So, in my view that makes it a milestone for modern medicine.”

Dosing at 55 mg, corresponding to a fixed 0.7 mg/kg dose, is ongoing in the dose-expansion portion of the trial, with enrollment across both arms expected to be completed by the end of 2022, Intellia Therapeutics reported.

The study was funded by Intellia Therapeutics and Regeneron Pharmaceuticals. Gillmore receives consultancy fees from Alnylam, Ionis, AstraZeneca, Pfizer, Intellia, ATTRalus, and Novo Nordisk and has received grant support from Alnylam Pharmaceuticals reports. Alexander reports serving on advisory boards for Almylam and Arbor Biotechnologies; has consulted  for Eidos, Ionis, Novo Nordisk and Pfizer; and has received grants from AHA, Alnylam, Eidos, and the National Institutes of Health.