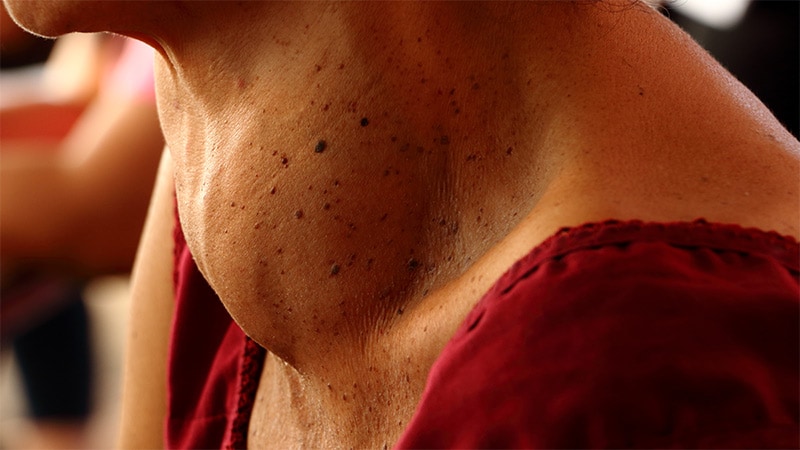 MONTREAL — Amid common patient concerns about weight gain in the treatment of hyperthyroidism, findings from a large study suggest the therapy with the most favorable survival rate — radioiodine — is not associated with an increased risk of weight gain or obesity.

However, “Overall, there was a nearly 10% risk of major adverse cardiac events [MACE] in patients with hyperthyroidism regardless of the treatment modality used,” she noted.

Overall, however, “these findings reinforce our knowledge that definitive treatment of an overactive thyroid leads to a longer life — even if there is some weight gain,” added Russell, who is chief of the Division of Head and Neck Endocrine Surgery at Johns Hopkins in Baltimore, Maryland.

Hyperthyroidism is associated with serious long-term cardiovascular and metabolic morbidity and mortality, and treatment is therefore essential. However, the swing to hypothyroidism that often occurs afterward commonly results in regaining the weight lost due to the hyperthyroidism if not more, potentially leading to obesity and its attendant health risks.

To investigate those risks in relation to the three key hyperthyroidism treatments, the authors conducted the EGRET trial. They identified 62,474 patients in the UK population-based electronic health record database who had newly diagnosed hyperthyroidism and were treated with antithyroid drugs (73.4%), radioiodine (19.5%), or thyroidectomy (7.1%) between April 1997 and December 2015.

Exclusion criteria included those with less than 6 months of antithyroid drugs as the only form of treatment, thyroid cancer, or pregnancy during the first episode.

With a median follow-up of about 8 years, those who were treated with thyroidectomy had a significantly increased risk of gaining weight compared with the general population (P < .001) and of developing obesity (body mass index > 30 kg/m2; P = .003), while the corresponding increases with antithyroid drugs and radioiodine were not significantly different compared with the general population over the same period.

In terms of survival, with an average follow-up of about 11 years per person, about 14% of the cohort died, with rates of 14.4% in the antithyroid drug group, 15.8% in the radioiodine group, and 9.2% in the thyroidectomy group.

Mortality rates were further assessed based on an average treatment effects analysis in which the average change was estimated in comparison to the index of antithyroid drugs, for instance, if all were treated instead with radioiodine. In that extension of life analysis, those treated with radioiodine could be expected to die, on average, 1.2 years later than those taking antithyroid drugs (P < .001), while those treated with thyroidectomy would be expected to die 0.6 years later, which was not statistically significant.

Using the same average treatment effects analysis, Boelaert noted, “We found a slightly increased risk of major adverse cardiovascular events following radioiodine compared with antithyroid drugs, [however], the risk was very small and may not be clinically relevant.”

“Previous data from our and other groups have shown reduced risks of mortality and cardiovascular death following radioiodine-induced hypothyroidism, although this is not confirmed in all studies.”

The findings are important because weight gain associated with hyperthyroidism treatment is no small matter for many patients, even prompting a lack of adherence to therapy for some, despite its importance, Boelaert noted.

“Since the majority of patients lose weight as a consequence of being hyperthyroid, it can be expected that they will at least regain the lost weight and possibly even have a weight overshoot,” she explained. “Indeed, many patients are reluctant to accept definitive treatment with surgery or radioiodine out of fear of weight gain.”

“This may cause difficulties to some patients who occasionally may even stop taking antithyroid drugs to prevent this weight regain. Such lack of adherence may have dire consequences and is likely a contributing factor to the increased mortality in these patients,” she observed.

Compared with the background population, men were significantly more likely to gain weight over the study period (odds ratio [OR], 1.7; P < .001) as were women (OR, 1.3; P < .001). Also in that study, radioiodine was associated with greater weight gain (0.6 kg; P < .001) compared with antithyroid drug treatment alone.

Russell added that even when weight gain does occur, the payoff of having treated the potentially serious state of hyperthyroidism is a highly beneficial trade-off.

Ultimately, “the goal of treating any patient with Graves’ should be to get them to become hypothyroid as quickly as possible,” he said. “Patients have options, and all of these options can be safe in the right situation.”

“It is unrealistic to think that going from a hyperthyroid state to a low thyroid state will not result in weight gain for many patients,” Russell added. “But the key point is that overall health is better despite this weight gain.”

Boelaert has disclosed consulting fees paid to the University of Birmingham by Lilly and Eisai. Russell has reported no relevant financial relationships.