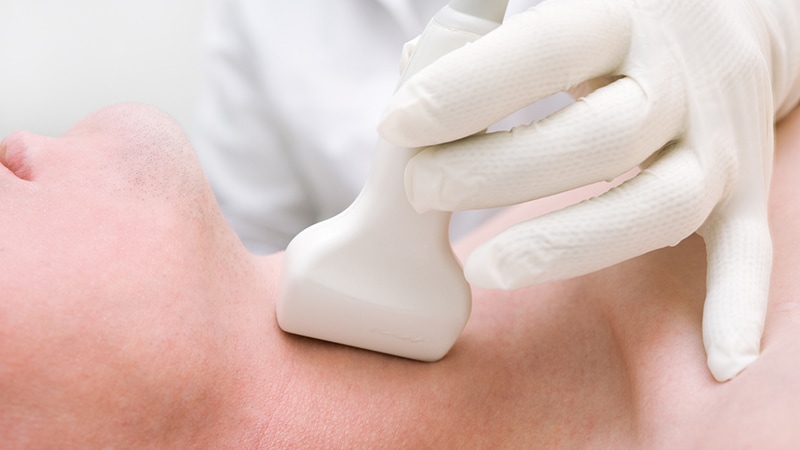 A new study addresses the “holy grail” in thyroid oncology: how to jump-start radioactive iodine treatment when it stops working for patients with thyroid cancer.

The investigators report that a combination of the MEK inhibitor trametinib and the BRAF inhibitor dabrafenib restored radioiodine uptake in 2 of 6 patients (33%) with BRAF-mutated thyoid cancer.

This is the first study to report successful radioiodine reuptake with a BRAF-inhibitor in patients who carry the mutation, the investigators point out. The team was led by Manuel Weber, MD, a nuclear medicine specialist at Essen University Hospital, Germany.

A previous investigation using the MEK inhibitor selumetinib alone restored uptake in only 1 of 9 patients with BRAF mutations (11%), they note.

The trial also confirmed that MEK inhibition alone can restore radioiodine uptake for patients who do not have BRAF mutations. Uptake was restored in 5 of 14 patients (36%) who did not carry the mutation.

The findings were published October 1 in Clinical Cancer Research.

In the study, the investigators addressed a problem that has vexed oncologists for decades: how to restore radioiodine uptake in patients with unresectable/metastatic differentiated thyroid cancer. Radioactive iodine is the go-to treatment, but most patients’ disease becomes refractory to it.

As is typical of studies of this problem, and despite its importance, there were only a few participants in the new study.

“Using targeted drugs to reinduce [radioactive iodine]” uptake, known as redifferentiation therapy, “has long been sought after as the holy grail in endocrine oncology,” but results so far have not been very encouraging. The new research adds “to our understanding of how best to target tumors based on their molecular profile,” comment Maria Cabanillas, MD, an oncologic endocrinologist at MD Anderson Cancer Center in Houston, Texas, and colleagues, in an accompanying editorial.

The editorialists were impressed with the results with the dual therapy combination, but they would like to see additional studies to see whether BRAF inhibition alone is able to restore radioiodine uptake in patients with BRAF mutations.

Because of past failures, when planning this new study, the investigators thought that they needed more potent inhibition of MAPK signaling — the metabolic pathway that leads to loss of radioiodine sensitivity in thyroid cancer — in patients with BRAF mutations. They decided that they needed stronger inhibition than is possible with MEK inhibitors alone, so they tried a two-drug approach, Weber and colleagues explain.

Patients were eligible to enroll in the study if they had unresectable and/or radioiodine-refractory thyroid cancer of follicular origin. The team also required a minimum lesion size of 1.5 cm.

The 20 patients who qualified were treated with trametinib 2 mg daily for 21 days, plus add-on dabrafenib 75 mg twice daily for the six patients with BRAF mutations.

The seven patients in whom radioiodine uptake was restored — as confirmed by nuclear imagining — were then treated with radioiodine-131.

Five of the seven had stable disease on imaging within a year, one had a partial response, and one had progressive disease, all determined on the basis of RECIST 1.1 criteria.

There were no strong responses, but the team and editorialists agree that it was still a win because, they say, the main point of restoring radioiodine uptake is to delay initiating therapy with long-term tyrosine kinase inhibitors, owing to these drugs’ substantial safety, quality-of-life, and financial burdens.

Overall, Weber and his team say their approach “was safe and resulted in successful redifferentiation in about one third of patients in each arm.”

One patient who successfully achieved redifferentiation underwent a second treatment at 2 years, which resulted in further reduction in tumor volume and thyroglobulin levels.

There was one grade 3 adverse event (pyrexia) and one grade 4 event (a rash), but both were self-limited, the authors comment.

No funding source for the study was reported. The researchers have numerous industry ties, including Weber, who reported receiving personal fees from Boston Scientific, Terumo, Eli Lilly, and Advanced Accelerator Applications. The editorialists also have ties with industry. Cabanillas has received grants and/or personal fees from Genentech, Merck, Eisai, Eli Lilly, and Exelixis.

M. Alexander Otto is a physician assistant with a master’s degree in medical science and a journalism degree from Newhouse. He is an award-winning medical journalist who worked for several major news outlets before joining Medscape and is also an MIT Knight Science Journalism fellow. Email: aotto@mdedge.com