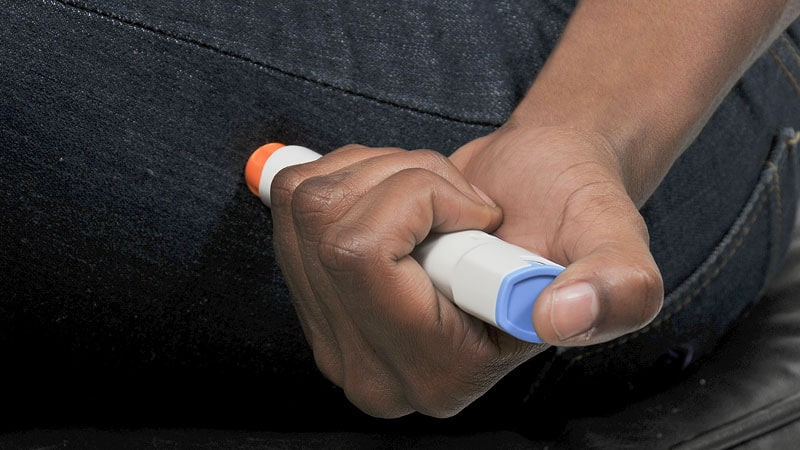 LOUISVILLE, Kentucky — Nearly half of adults with food allergies have not been prescribed an epinephrine autoinjector (EAI) by their physician, according to survey results presented here at the American College of Allergy, Asthma, and Immunology (ACAAI) 2022 Annual Meeting.

The use of EAIs is therefore critical for people with severe food allergies. However, the new research suggests that many adults with these allergies have problems accessing or using this potentially lifesaving treatment.

“Lack of understanding about how to utilize the device as well as fear of the large needle are two contributing factors to low EAI use,” said study author Jenna Yost, MS, of the nonprofit organization Food Allergy Research and Education, in an email to Medscape Medical News.

The study by Yost and colleagues was based on an online survey of 1006 adults with food allergies. The survey was developed under a collaborative effort that included patient advocacy groups, physicians, caregivers, and survey methodologists.

Only 52% of those who completed the survey said they had ever been prescribed an EAI. This finding suggests that a large proportion of adults with food allergies do not receive a prescription for this treatment, despite its effectiveness in treating anaphylaxis induced by food allergens.

When asked why they didn’t have access to an EAI, surveyed participants often reported that their doctor did not say this treatment was needed. Also, many patients said they didn’t believe they needed an EAI.

About 36% of participants who completed the survey also said they had fears about the possible life-threatening side effects associated with EAIs.

Yost stated that she and her research team also found that the average cost for a set of EAIs is $476, and problems with insurance created barriers to treatment access.

The rate of self-reported history of EAI prescriptions was lowest among people with Medicare (48%) and Medicaid (51%).

Only a third (33%) of surveyed adults said they had an unexpired EAI, while just 25% said they always had access to EAIs.

Yost, who is presenting the survey findings at this year’s ACAAI meeting, noted that given the potentially severe consequences of untreated food allergy, more providers need to be writing prescriptions for EAIs or asking patients if they have an unexpired prescription.

“This is especially true for those in lower-income brackets, as we see patients with Medicaid are less likely to be asked if they have a prescription,” Yost said.

Ruchi Gupta, MD, the director of the Center for Food Allergy and Asthma Research at Northwestern University Feinberg School of Medicine, explained in an email to Medscape that since EAIs are the only and best treatment for anaphylaxis, adults and children with food allergies should always carry this tool.

“Studies show that if administered early during a severe reaction, an EAI can reduce symptoms and time spent in the emergency room,” according to Gupta, who wasn’t involved in the study.

But there is a lack of awareness, and there is little education on when and how to use EAIs. “Providers need to educate patients on how to use an EAI and when to use it,” Yost commented, “to give the patient confidence about the safety of the medication.”

In addition to providing training on how to use EAIs, Gupta explained that physicians can also let their patients know that this treatment will improve their symptoms quickly and without pain.

Regarding patient fears about EAIs, Gupta noted that when people use this treatment once and see results, their fear often goes away over time.

Yost said that “naming and understanding the fear and hesitancy that patients feel is a good first step” in improving EAI use by patients who are prescribed this treatment.

A potential limitation of the survey study was that it included mostly self-identified White patients (61%). Additional research may be needed to determine whether any differences or disparities exist among a more racially/ethnically diverse population of people with food allergies.

The study was independently supported. Yost and Gupta report no relevant financial relationships.

Brandon May is a freelance medical journalist who has written more than 2100 articles for medical publications in the United States and the UK. Twitter: @brandonmilesmay