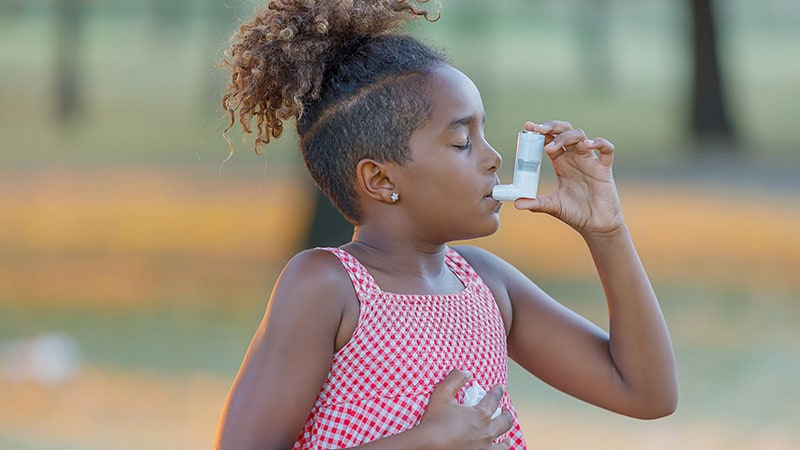 NASHVILLE, Tennessee — For children with uncontrolled asthma on standard therapies and meeting criteria of a type 2 (T2) inflammatory phenotype, a prospective 1-year extension from a phase 3 trial supports the biologic dupilumab as a potential treatment standard, according to the investigator who presented the findings here at the American College of Chest Physicians (CHEST) 2022 Annual Meeting.

“The appropriate candidate is a child with the T2 inflammatory phenotype who is still experiencing exacerbations on at least a medium dose of inhaled corticosteroids plus a second controller medication,” said Leonard B. Bacharier, MD, section chief, Division of Pediatric Allergy, Immunology, and Pulmonary Medicine, Vanderbilt University Medical Center, Nashville, Tennessee.

By T2 inflammatory phenotype, Bacharier specified that key features include an eosinophil count of at least 150 cells/mL and a FeNO level of at least 20 ppb. If children meet these and inadequate standard-therapy response criteria, Bacharier thinks the extension data support dupilumab as a routine therapy despite the cost.

“As a pediatrician, I think it is really important that children with asthma finish their childhood with the best bone health and the lowest risk of other steroid-associated adverse events,” Bacharier said.

Over the course of the 1-year extension, called EXCURSION, there was no evidence of diminished efficacy nor of any new safety signal. In other words, patients have remained well controlled for 2 years with a well-tolerated therapy. Bacharier pointed out, however, that one of the most compelling reasons to consider this as a potential standard was the very low rates at which patients required a course of steroids.

At the end of 1 year in the extension trial, called VOYAGE, the unadjusted annualized total number of steroid courses per patient was 0.414 in the dupilumab group vs 0.816 in the placebo group. At the end of EXCURSION, following an additional year of therapy, the rate was 0.152.

“This means that fewer than two patients out of 10 required prednisone in the previous year,” Bacharier said.

The EXCURSION extension study did not capture data on steroid-related adverse events, but Bacharier said that these data are reassuring for both acute and long-term risks of steroid exposure.

“We know that the adverse effects associated with oral steroids are related to cumulative exposure. The more you receive, the greater the risk of adverse effects,” he said.

In patients who were randomly assigned to placebo in the VOYAGE trial and then switched to dupilumab in the EXCURSION extension, steroid exposure was also very low, but whether evaluated as annualized total courses (0.152 vs 0.181) or by proportion of patients with any steroid intake (10.5% vs 13.2%), there was a numerical advantage for starting and remaining on dupilumab over the 2-year follow-up.

In VOYAGE, which was published last year in the New England Journal of Medicine, 408 children from ages 6 to 11 years were randomly assigned in a 2:1 ratio to dupilumab or matching placebo. For children weighing less than 30 kg, the dose was 200 mg. For those who weighed less, the dose was 100 mg. Both doses were administered every 2 weeks.

As previously reported, the study met the primary endpoint of annualized rate of severe asthma exacerbations, which was 0.31 in the dupilumab group vs 0.75 in the placebo group, a relative reduction of 59.3% (P < .001). Dupilumab was also superior on several secondary endpoints, including measures of lung function and asthma control.

During EXCURSION, treatment-emergent adverse events occurred in 2.5% of those who remained on dupilumab and 0.8% of those switched from placebo to dupilumab. Three patients (1.3%) permanently discontinued therapy due to a treatment-related event. The most common adverse events involved upper respiratory complaints, such as nasopharyngitis, pharyngitis, upper respiratory tract infections, and rhinitis influenza, but all were reported in fewer than 10% of patients. Other reported side effects, such as injection-site reactions and diarrhea occurred in 5% or fewer of patients.

“Over the 2 years, dupilumab was well tolerated, and there was evidence of an increased risk of adverse events for longer exposure,” Bacharier reported.

It is for this reason that Bacharier concluded that children with repeated exacerbations requiring steroids despite standard therapies should be considered for dupilumab if they also meet criteria for the T2 inflammatory phenotype. This last point is important.

“In children with low levels of eosinophil and low phenol, we are not seeing these kinds of response,” Bacharier said. Rather, in the absence of eosinophilia, “there is probably no difference between dupilumab and placebo.”

An important steroid-sparing effect is “suggested” by the data, but Sally E. Wenzel, MD, director of the University of Pittsburgh Asthma and Environmental Lung Health Institute in Pittsburgh, Pennsylvania, characterized the idea that dupilumab is emerging to be a standard in uncontrolled asthma in children with the T2 phenotype as “a bit premature.”

She challenged the conclusion that the EXCURSION data associated dupilumab with a reduction in annualized steroid courses over time. While the number was lower after 2 years of treatment than after 1, Wenzel pointed out that all patients were on dupilumab in the second year, “so we don’t know what really happens without treatment.” She said there are other potential explanation, including the possibility that aging children have less active disease.

More importantly, Wenzel said in an interview that she would also hesitate to urge biologics in every child that meets the criteria that Bacharier outlined.

“The most important concern is that we do not know how long one should continue the dupilumab and if the long-term treatment adversely or positively affects a growing immune system,” she said.

There is reason to be concerned that blockage of an entire immune pathway with a biologic could adversely affect autoimmunity as well as susceptibility to cancer, according to Wenzel. She hopes this does not prove to be the case, but she encouraged prudence until there are more data to judge.

While extension data for dupilumab “sound good,” she thinks moving toward any type of standard of care with biologics in children “has to be done with caution and constant evaluation and reevaluation.”