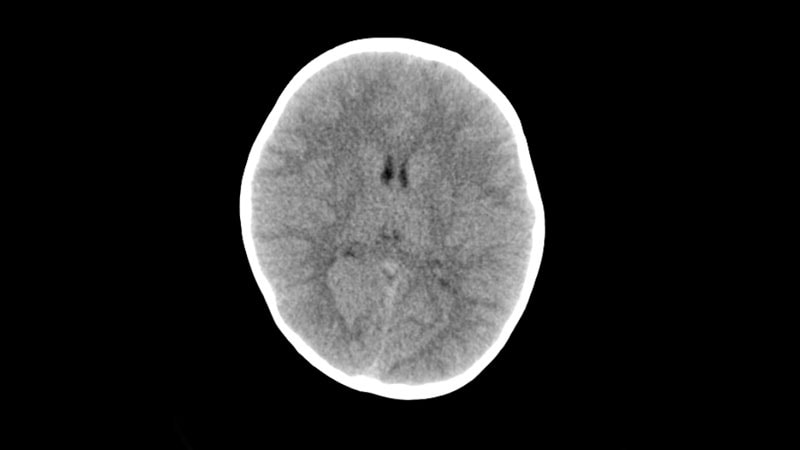 Children and young adults who are exposed to a single CT scan of the head or neck before age 22 years are at significantly increased risk of developing a brain tumor, particularly glioma, after at least 5 years, according to results of the large EPI-CT study.

“Translation of our risk estimates to the clinical setting indicates that per 10,000 children who received one head CT examination, about one radiation-induced brain cancer is expected during the 5–15 years following the CT examination,” noted lead author Michael Hauptmann, PhD, from the Institute of Biostatistics and Registry Research, Brandenburg Medical School, Neuruppin, Germany, and co-authors.

“Next to the clinical benefit of most CT scans, there is a small risk of cancer from the radiation exposure,” Hauptmann told Medscape Medical News.

“So, CT examinations should only be used when necessary, and if they are used, the lowest achievable dose should be applied,” he said.

The study was published online on December 6 in The Lancet Oncology.

“This is a thoughtful and well-conducted study by an outstanding multinational team of scientists that adds further weight to the growing body of evidence that has found exposure to CT scanning increases a child’s risk of developing brain cancer,” commented Rebecca Bindman-Smith, MD, from the University of California, San Francisco (UCSF), who was not involved in the research.

“The results are real, and important,” she told Medscape Medical News, adding that “the authors were conservative in their assumptions, and performed a very large number of sensitivity analysis…to check that the results were robust to a large range of assumptions ― and the results changed relatively little.”

Indeed, particularly in the United States, “we perform many CT scans in children and even more so in adults that are simply unnecessary,” agreed Bindman-Smith, who is professor of epidemiology and biostatistics at UCSF. “It is important for patients and providers to understand that nothing we do in medicine is risk free, including CT scanning. If a CT is necessary, the benefit almost certainly outweighs the risk. But if [not], then it should not be obtained. Both patients and providers must make thoroughly considered decisions before asking for or agreeing to a CT.”

She also pointed out that while this study evaluated the risk only for brain cancer, children who undergo head CTs are also at increased risk for leukemia.

The study included 658,752 individuals from nine European countries and 276 hospitals. Each patient had received at least one CT scan between 1977 and 2014 before they turned 22 years of age. Eligibility requirements included their being alive at least 5 years after the first scan and that they had not previously been diagnosed with cancer or benign brain tumor.

The radiation dose absorbed to the brain and 33 other organs and tissues was estimated for each participant using a dose reconstruction model that included historical information on CT machine settings, questionnaire data, and Digital Imaging and Communication in Medicine (DICOM) header metadata. “Mean brain dose per head or neck CT examination increased from 1984 until about 1991, following the introduction of multislice CT scanners at which point thereafter the mean dose decreased and then stabilised around 2010,” note the authors.

During a median follow-up of 5.6 years (starting 5 years after the first scan), 165 brain cancers occurred, including 121 (73%) gliomas, as well as a variety of other morphologic changes.

The mean cumulative brain dose, which lagged by 5 years, was 47.4 mGy overall and 76.0 mGy among people with brain cancer.

“We observed a significant positive association between the cumulative number of head or neck CT examinations and the risk of all brain cancers combined (P < .0001), and of gliomas separately (P = .0002),” the team reports, adding that, for a brain dose of 38 mGy, which was the average dose per head or neck CT in 2012–2014, the relative risk of developing brain cancer was 1.5, compared with not undergoing a CT scan, and the excess absolute risk per 100,000 person-years was 1.1.

These findings “can be used to give the patients and their parents important information on the risks of CT examination to balance against the known benefits,” noted Nobuyuki Hamada, PhD, from Central Research Institute of Electric Power Industry, Tokyo, Japan, and Lydia B Zablotska, MD, PhD, from UCSF, writing in a linked commentary .

“In recent years, rates of CT use have been steady or declined, and various efforts (eg, in terms of diagnostic reference levels) have been made to justify and optimise CT examinations. Such continued efforts, along with extended epidemiological investigations, would be needed to minimise the risk of brain cancer after paediatric CT examination,” they add.

Keeping Dose to a Minimum

The study’s finding of a dose-response relationship underscores the importance of keeping doses to a minimum, Bindman-Smith commented. “I do not believe we are doing this nearly enough,” she added.

“In the UCSF International CT Dose Registry, where we have collected CT scans from 165 hospitals on many millions of patients, we found that the average brain dose for a head CT in a 1-year-old is 42 mGy but that this dose varies tremendously, where some children receive a dose of 100 mGy.

“So, a second message is that not only should CT scans be justified and used judiciously, but also they should be optimized, meaning using the lowest dose possible. I personally think there should be regulatory oversight to ensure that patients receive the absolutely lowest doses possible,” she added. “My team at UCSF has written quality measures endorsed by the National Quality Forum as a start for setting explicit standards for how CT should be performed in order to ensure the cancer risks are as low as possible.”