Adolescents Who Exercised After a Concussion Recovered Faster 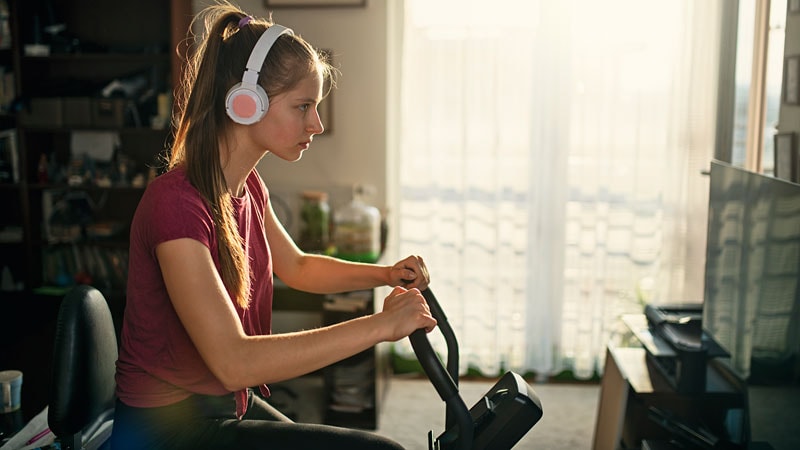 After a concussion, resuming aerobic exercise relatively early on – at an intensity that does not worsen symptoms – may help young athletes recover sooner, compared with stretching, a randomized controlled trial (RCT) shows.

The study adds to emerging evidence that clinicians should prescribe exercise, rather than strict rest, to facilitate concussion recovery, researchers said.

Tamara McLeod, PhD, ATC, professor and director of athletic training programs at A.T. Still University in Mesa, Ariz., hopes the findings help clinicians see that “this is an approach that should be taken.”

“Too often with concussion, patients are given a laundry list of things they are NOT allowed to do,” including sports, school, and social activities, said McLeod, who was not involved in the study.

The research, published in The Lancet Child & Adolescent Health, largely replicates the findings of a prior trial while addressing limitations of the previous study’s design, researchers said.

For the trial, John J. Leddy, MD, with the State University of New York at Buffalo and colleagues recruited 118 male and female adolescent athletes aged 13-18 years who had had a sport-related concussion in the past 10 days. Investigators at three community and hospital-affiliated sports medicine concussion centers in the United States randomly assigned the athletes to individualized subsymptom-threshold aerobic exercise (61 participants) or stretching exercise (57 participants) at least 20 minutes per day for up to 4 weeks. Aerobic exercise included walking, jogging, or stationary cycling at home.

“It is important that the general clinician community appreciates that prolonged rest and avoidance of physical activity until spontaneous symptom resolution is no longer an acceptable approach to caring for adolescents with concussion,” Leddy and coauthors said.

The investigators improved on the “the scientific rigor of their previous RCT by including intention-to-treat and per-protocol analyses, daily symptom reporting, objective exercise adherence measurements, and greater heterogeneity of concussion severity,” said Carolyn A. Emery, PhD, and Jonathan Smirl, PhD, both with the University of Calgary (Alta.), in a related commentary. The new study is the first to show that early targeted heart rate subsymptom-threshold aerobic exercise, relative to stretching, shortened recovery time within 4 weeks after sport-related concussion (hazard ratio, 0.52) when controlling for sex, study site, and average daily exercise time, Emery and Smirl said.

Among athletes who adhered to their assigned regimens, the differences were more pronounced: The median recovery time was 21 days for the stretching group, compared with 12 days for the aerobic exercise group. The rate of postconcussion symptoms beyond 28 days was 9% in the aerobic exercise group versus 31% in the stretching group, among adherent participants.

The right amount and timing of exercise, and doing so at an intensity that does not exacerbate symptoms, may be key. Other research has suggested that too much exercise, too soon may delay recovery, Emery said in an interview. “But there is now a lot of evidence to support low and moderate levels of physical activity to expedite recovery,” she said.

The study was funded by the American Medical Society for Sports Medicine. The study and commentary authors and McLeod had no disclosures.