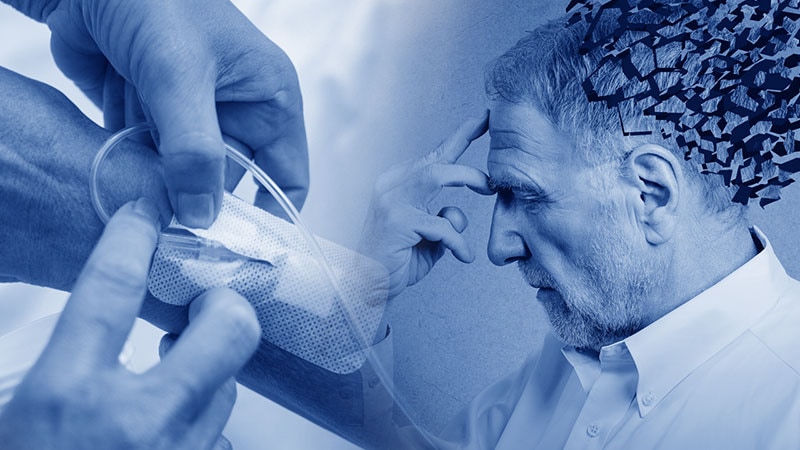 As the controversial Alzheimer’s disease (AD) drug aducanumab (Aduhelm) begins its integration into clinical practice, some physicians are concerned the drug’s prescribing label does not include adequate brain imaging recommendations to detect amyloid-related imaging abnormalities (ARIA).

Specifically, the drug’s label calls for three MRI brain scans before, and during, the titration period. The problem is the trial data used for the drug’s approval by the US Food and Drug Administration (FDA) included five MRIs to screen for ARIA.

Riddle shared her team’s clinical experience with aducanumab, as well as information on four ARIA cases from their clinic, during a presentation at the American Association for Geriatric Psychiatry (AAGP) 2022 Annual Meeting.

ARIA is the most common risk associated with aducanumab and has two types: ARIA-E (with edema) and ARIA-H (with hemosiderin). These can co-occur, particularly in areas of high amyloid burden, Riddle noted during her presentation.

ARIA is often detected incidentally via MRI. Patients are usually asymptomatic, but when they do have symptoms, headache, dizziness, and vision changes are the most common complaints. However, these are generally mild, said Riddle.

Nevertheless, in some cases, there can be severe sequelae, including severe edema or bleeding and seizures, she added.

A major risk factor for ARIA is apolipoprotein 4 (APOE ε4) status. Carriers are twice as likely to develop ARIA as non-carriers.

Given the high rate of ARIA in APOE ε4 carriers, the team from Butler Hospital recommends APOE testing prior to treatment with aducanumab.

The risk for developing ARIA is highest within the year of dose titration, Riddle noted. The current FDA label recommends obtaining a recent brain MRI, within 1 year, and then scans before the 7th and 12th infusions. However, the protocol during the clinical trials of aducanumab included MRI at baseline and prior to the 5th, 7th, 9th, and 12th infusions.

Riddle’s group has opted to continue the research protocol with new patients. “There’s concern that the decreased MRI monitoring based on the current FDA label may pose a significant safety risk, particularly among those who we know are already at a higher risk of developing ARIA,” she said.

Riddle also shared how her team selects aducanumab candidates. They need to have mild cognitive impairment (MCI), a mini-mental state examination (MMSE) score of 24 to 30, and a recent MRI to review for eligibility and APOE testing.

The most common reason for treatment exclusion is advanced disease and comorbidity such as stroke.

Patients are monitored to ensure safety and tolerability and regular review of MRI findings. In addition, patients and their families receive ongoing education about the drug.

Of the 11 patients who were candidates for aducanumab treatment, four developed ARIA. All are APOE ε4 carriers, with two homozygotes and two heterozygotes. All had severe radiographic ARIA-E, with one developing ARIA-H.

“Importantly, they were all initially asymptomatic and the ARIA was just picked up on their regular surveillance MRI,” said Riddle. She added that the drug was discontinued in all four cases.

Three of the ARIA cases were detected prior to the 5th scan, which is “concerning,” said Riddle. “Based on the current FDA label of safety monitoring, they don’t recommend doing that MRI. So [clinicians] would have dosed through that ARIA, which could put someone at much greater risk of developing severe symptoms.”

In addition, 14 patients at the center are receiving treatment with aducanumab. However, at this point they have not yet received their first MRI screen.

Riddle noted that when patients are told they are not candidates for treatment, or when treatment is discontinued, they are upset. However, she added, there is also a substantial level of understanding.

“We have a very layered discussion that includes the simple fact that we still aren’t sure if this is going to provide any clinical benefit, that this decision [to approve the drug] was accelerated, and that data are still being gathered,” Riddle added.

Riddle noted the risk of ARIA is highest during the dose titration period. “There’s a signal that once you get to the 10 mg/kg dose, that plateaus.”

None of the patients at her center have reached that 12-month treatment mark. “The current plan is to do the MRI at 12 months then to give serial MRIs but less frequently, and whether that’s at 6 months or annually is yet to be determined.