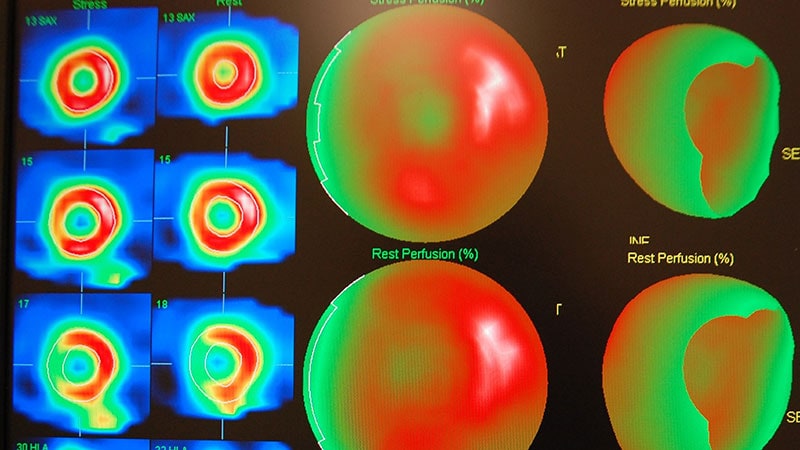 Miguel Figueroa, MD, PhD, specialist in nuclear medicine and radiology at University Hospital Linköping, Sweden, presented the findings in a special session on cardiac imaging. In an interview with Medscape Medical News, he explained the need for improved MPI. “We want to reduce our false positives by lowering the number of artifacts when we use a digital camera for myocardial perfusion imaging,” said Figueroa.

“We’ve found that, with the deep-learning software, we reduce the number of false positive results significantly. Specificity goes from 54% without the software to 85% when we apply it,” he reported. “Also, we found the negative predictive value increases from 63% to 73%.”

Figueroa illustrated the value of the deep-learning attenuation correction software (DLACS) in reducing the false positive rate with a number of case studies. In one example, a 70-year-old woman smoked and had type 2 diabetes, a body mass index of 26 kg/m3, but no history of cardiac problems.

“She was diagnosed with gastric cancer and was going to be operated, but they needed to know if there was any issue with her heart first, to reduce risk,” he explained.

After performing a standard MPI (without the AI software), perfusion defects were seen. She was considered to have ischemia and was sent for invasive coronary angiography. However, no stenosis was found on angiography. Figueroa stressed, “Angiography is the real truth, the gold standard.

“Retrospectively, with the software, we saw how the image was clarified and no pathological image was present,” he noted.

“This patient could have avoided the angiography and could have avoided a hospital stay, plus the risk with intervention, such as bleeding, stroke, increased radiation on the table, and potential damage from the instruments,” he added

The study aimed to evaluate the diagnostic performance of DLACS for MPI using a cadmium-zinc-telluride cardio-dedicated camera. The investigators correlated this with invasive coronary angiography (ICA) for the diagnosis of coronary artery disease in a high-risk population.

Figueroa drew on retrospective data from September 2014 to December 18 regarding 2884 patients drawn from the University Hospital, Linköping, Sweden. A total of 263 patients who had a record of angiography were included.

Upon quantitative angiography, any stenosis of at least 50% was considered significant and was regarded as a positive finding on angiography. The most common clinical indication was exertional angina and/or dyspnea, which was found in 259 patients. The mean pretest probability score for coronary disease according to the European Society of Cardiology criteria was 36% for the whole population.

MPI was performed with a CZT cardio-dedicated camera. Images were assessed visually with and without the DLACS by two nuclear medicine consultants using the 17-segment model of the left ventricle and a conventional 4-point grading system.

Figueroa highlighted that true positive cases of coronary artery disease were seen to be positive on angiography and software-enhanced MPI. “With a true positive case, there’s no reperfusion, and this suggests ischemia. When we investigate with angiography, you can see the obstruction,” said Figueroa. “When we apply the software, the perfusion defect is visible, it doesn’t disappear, which it would with a false positive.”

Audience member Wolfgang Burchert, MD, director of the Institute for Radiology, Nuclear Medicine and Molecular Imaging, Ruhr-Universität Bochum, Germany, said nuclear medicine needed to prepare for what was to come from AI. “Right now, the water is pulling back and the tsunami is coming. AI is really an impressive area in the field of nuclear medicine.

“The study by Dr Figueroa optimized the attenuation correction that ends up with 20% less false positives, meaning 1 in 5 are wrong. AI improves the outcome.

“We all know the strategies of Google and similar that need 100,000 datasets or more for deep learning, but with AI [in cardiac imaging], often only 60 to 80 patient studies are sufficient to train the algorithm, because data are very carefully chosen with little variation between patients. AI is going to expand exponentially in nuclear medicine,” Burchert remarked.

Figueroa and Burchert have disclosed no relevant financial relationships.