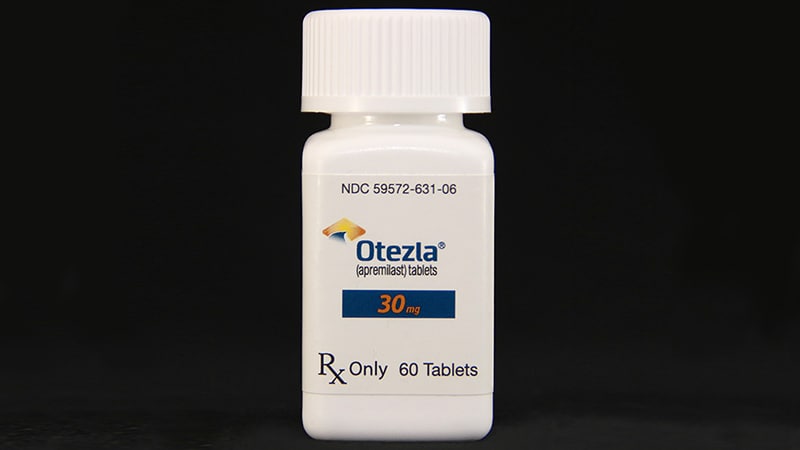 BOSTON — Treatment with apremilast (Otezla) did not significantly affect vascular inflammation in patients with psoriasis but was associated with a generally beneficial effect on biomarkers associated with heart disease, lipid metabolism, and glucose metabolism, in a study presented at the 2022 American Academy of Dermatology annual meeting.

In the phase 4, open-label, single arm trial, participants also lost subcutaneous and visceral fat after 16 weeks on the oral medication, a phosphodiesterase 4 (PDE4) inhibitor, and maintained that loss at 52 weeks.

People with psoriasis have an increased risk of obesity, type 2 diabetes, and cardiovascular events. Patients with more significant psoriasis “tend to die about 5 years younger than they should, based on their risk factors for mortality,” Joel Gelfand, MD, MSCE, professor of dermatology and epidemiology and vice chair of clinical research in dermatology at the University of Pennsylvania Perelman School of Medicine, Philadelphia, told Medscape Medical News.

He led the research and presented the findings at the AAD meeting March 26. “As a result, there has been a keen interest in understanding how psoriasis therapies impact cardiovascular risk, the idea being that by controlling inflammation, you may lower the risk of these patients developing cardiovascular disease over time,” he said.

Previous trials looking at the effect of psoriasis therapies on vascular inflammation “have been, for the most part, inconclusive,” Michael Garshick, MD, a cardiologist at NYU Langone Health in New York City, told Medscape Medical News. Garshick was not involved with the research. A 2021 systematic review of psoriasis clinicals trials reported that the tumor necrosis factor (TNF) blocker adalimumab (Humira) and phototherapy had the greatest effect on cardiometabolic markers, while ustekinumab (Stelara), an interleukin (IL)-12 and IL-23 antagonist, was the only treatment that improved vascular inflammation. These variable findings make this area “ripe for study,” noted Garshick.

To observe how apremilast, which is approved by the FDA for treating psoriasis and psoriatic arthritis, affected vascular inflammation, adiposity, and blood-based cardiometabolic markers, Gelfand organized an open-label study in adults with moderate-to-severe psoriasis. All participants were 18 years or older, had psoriasis for at least 6 months, and were candidates for systemic therapy. All patients underwent FDG PET/CT scans to assess aortic vascular inflammation and had blood work at baseline. Of the 70 patients originally enrolled in the study, 60 remained in the study at week 16, including 57 who underwent imaging for the second time. Thirty-nine participants remained in the study until week 52, and all except one had another scan.

The average age of participants was 47 years and their mean BMI was 30. More than 80% of participants were White (83%) and 77% were male. The study population had lived with psoriasis for an average of 16 years and 8 patients also had psoriatic arthritis. At baseline, on average, participants had a Psoriasis Area and Severity Index (PASI) score of 18.62, a dermatology life quality index (DLQI) score of 11.60, and 22% of participants’ BSA (body surface area) were affected. The mean TBRmax, the marker for vascular inflammation, was 1.61.

Treatment responses were as expected for apremilast, with 35% of patients achieving PASI 75 and 65% of participants reporting DLQI scores of 5 or less by 16 weeks. At 52 weeks, 31% of the cohort had achieved PASI 75 and 67% reported DLQI score of 5 or higher. All psoriasis endpoints had improved since baseline (P = .001).

Throughout the study period, there was no significant change in TBRmax. However, in a sensitivity analysis, the 16 patients with a baseline TBRmax  of 1.6 or higher had an absolute reduction of 0.21 in TBR by week 52. “That suggests that maybe a subset of people who have higher levels of aortic inflammation at baseline may experience some reduction that portend, potentially, some health benefits over time,” Gelfand said. “Ultimately, I wouldn’t hang my hat on the finding,” he said, noting that additional research comparing the treatment to placebo is necessary.

“If you want to be a purist, this was a negative trial,” said Garshick, because apremilast was not found to decrease vascular inflammation; however, he noted that the biomarker changes “were hopeful secondary endpoints.” It could be, he said, that another outcome measure may be better able to show changes in vascular inflammation compared with FDG. “It’s always hard to figure out what a good surrogate endpoint is in cardiovascular trials,” he noted, “so it may be that FDG/PET is too noisy or not reliable enough to see the outcome that we want to see.”

Gelfand reports consulting fees/grants from Amgen, AbbVie, BMS, Boehringer Ingelheim, Janssen Biologics, Novartis Corp, Pfizer, and UCB (DSMB). He serves as the Deputy Editor for the Journal of Investigative Dermatology and the Chief Medical Editor at Healio Psoriatic Disease and receives honoraria for both roles. Garshick has received consulting fees from AbbVie.