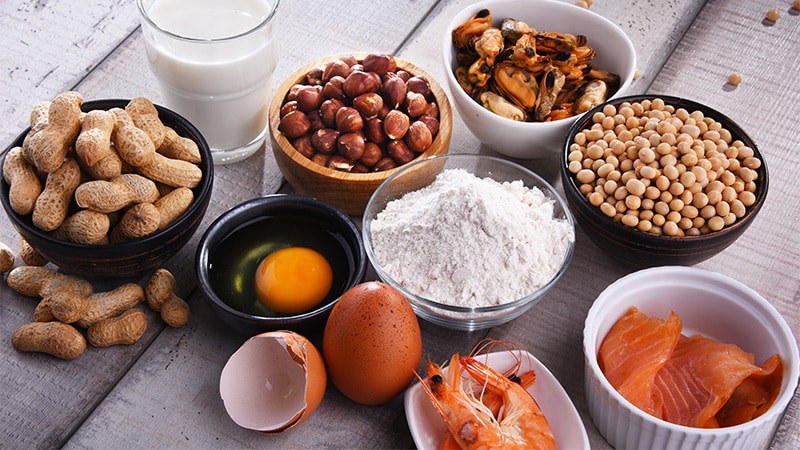 INDIANAPOLIS, Indiana — If there’s one truth that David R. Stukus, MD, has come to realize from his 2 years as director of a food allergy treatment center, it’s that food allergies in children and adolescents are grossly overdiagnosed and misdiagnosed.

“When they’re given a diagnosis of food allergy, many families do not receive proper education to help them understand the risk as well as self-management and prognosis,” he said at the annual meeting of the Society for Pediatric Dermatology. “They are left to fend for themselves, which leads to increased anxiety. If they don’t understand what it means to manage their child’s food allergy, they’re going to think that they’re a ticking time bomb,” said Stukus, director of the Food Allergy Treatment Center and professor of pediatrics in the division of allergy and immunology at Nationwide Children’s Hospital in Columbus, Ohio.

During his presentation, he toured clinicians through best practices to diagnose and treat food allergies and shared cautionary tales of unsupported claims, unnecessary testing, and potential harm to misdiagnosed patients.

While food allergies can be serious and life-threatening, they are also manageable, he continued. It doesn’t mean that children with food allergies can’t go to school, attend baseball games, or participate in activities that any other child would. “Telling someone to adopt a restricted diet is not a benign recommendation,” he said. “That can cause real harm.”

Stukus defined food allergy as an immunologic response to an allergen that results in reproducible symptoms with every exposure. “Most commonly we’re going to see IgE-mediated food allergies, which often occur within minutes of eating certain foods,” he said.

Food intolerance, on the other hand, is a nonimmunologic response to a food that causes gastrointestinal symptoms with exposure. “This can come and go over time,” he said. “The most common example is lactose intolerance.”

Then there’s food sensitivity, which Stukus said is not a medical term but a marketing term often applied to a variety of symptoms without evidence to support its use.

“On the internet you will find many companies marketing food sensitivity tests,” he said. “Gluten-free foods are now a billion-dollar industry. There are no validated tests to diagnose food sensitivity. All the blood tests measure IgG, which is memory antibody. If you eat a food, it is a normal response to produce IgG to it, but these companies will test all these things and when it comes back elevated, they say ‘Aha! This is your food sensitivity and this is why you’re not sleeping well at night.’ ” To illustrate the harm that can come from food allergy tests, he discussed a 6-year-old girl who presented to his clinic several years ago with typical symptoms of allergic rhinitis. The parent reported a history of sneezing around dogs; itchy, watery eyes in the spring; recurrent cough; and frequent upper respiratory infections.

The referring physician had ordered an allergy panel, which flagged a long list of foods that the girl was supposedly allergic to, including banana, egg white, cod, and peanut. “This family was told to take all of these foods out of her diet,” Stukus said. “Interestingly, she had been seen by this physician for evaluation of environmental allergies, but the only ones included in the test were cat, cockroach, dog, and dust mite. They didn’t even include the spring pollen allergies. You want to avoid tests like this.”

Food sensitization is not the same as food allergy, he continued, noting that about 30% of all children will have detectable IgE toward peanuts, milk, egg, and shrimp, but that only about 5% are truly allergic to those foods.

“If we go by IgE testing alone, we’re going to overdiagnose the vast majority of people with food allergies that they don’t actually have,” he said. “Food allergy is diagnosed by the history and then confirmed by testing. With IgE-mediated food allergies we know that milk, egg, wheat, soy, finned fish, shellfish, and peanuts account for more than 90% of all food allergy reactions. Can any food potentially cause a food allergy? Yes, potentially, but we know that most fruits and vegetables and grains are very unlikely to cause an allergy.”

IgE-mediated food allergies are objective, have immediate onset, and are reproducible with every exposure to the offending food, no matter what form. Typical symptoms include hives, swelling, vomiting, runny nose or congestion, wheezing, hypotension, and anaphylaxis.

“We can also accurately identify infants that are more at risk to develop food allergies,” Stukus said. Infants with refractory atopic dermatitis often progress from eczema to food allergies to allergic rhinitis and asthma, the so-called “allergic march.”

“Family history does have a role as well, but it’s not as significant,” he said. As for diagnostic tools, skin prick testing detects the presence of specific IgE bound to cutaneous mast cells and has a high negative predictive value and a low positive predictive value (around 50%).

With serum-specific IgE testing, levels of IgE for food and/or inhalant allergen can be obtained conveniently through routine venipuncture. Results are reported in ranges from 0.1 kU/L to 100 kU/L, and some are reported as arbitrary classes in levels of severity from 1 to 5.

“I highly discourage anybody from paying attention to arbitrary classes [on these reports],” Stukus said. “Those are meaningless. The absolute value is all that matters.”

He added that both skin and blood testing have high rates of false positive results. “We really need to use the history to help guide what tests we do; they were never designed to be used as screening tests, yet they’re used as screening tests on a regular basis,” he said. “There is also no indication to do shotgun testing. The reason why is because we see lots of cross reactivity on testing. If we have someone with peanut allergy and we start doing specific IgE testing for all legumes, more often than not we’re going to find detectable IgE, but it’s much less likely that they actually have clinical reactivity to foods like soy and beans.”

Stukus advises clinicians to consider certain questions before they order an allergen panel, the first being: Do I have the knowledge and experience to properly interpret the results?

“If you don’t know how to interpret the test, you probably shouldn’t order it in the first place,” he said. “If you do have the knowledge to interpret the results, will the results help to determine the diagnosis or change management? If not, why are you testing just to test? There is zero clinical indication to order a food allergy panel.” Stukus recommended a review of unproven tests for adverse reactions to foods published in 2018 in The Journal of Allergy and Clinical Immunology. According to Stukus, potential harms from unproven food allergy tests include cost, unnecessary dietary avoidance, and a delay in diagnosis for the underlying condition. During the COVID-19 pandemic, he observed an increase in the number of patients with orthorexia, which he described as an eating disorder characterized by having an unsafe obsession with healthy food that becomes deeply rooted in the individual’s way of thinking to the point that it interferes with daily life.

“If you take someone who has anxiety at baseline, and then you give them a list of foods that they allegedly can’t eat, that’s going to cause worse anxiety,” he added. “We’re seeing that from the results of these tests.”

Stukus disclosed that he is a consultant for Before Brands, Kaleo, and Novartis. He is also associate editor of the Annals of Allergy, Asthma and Immunology.