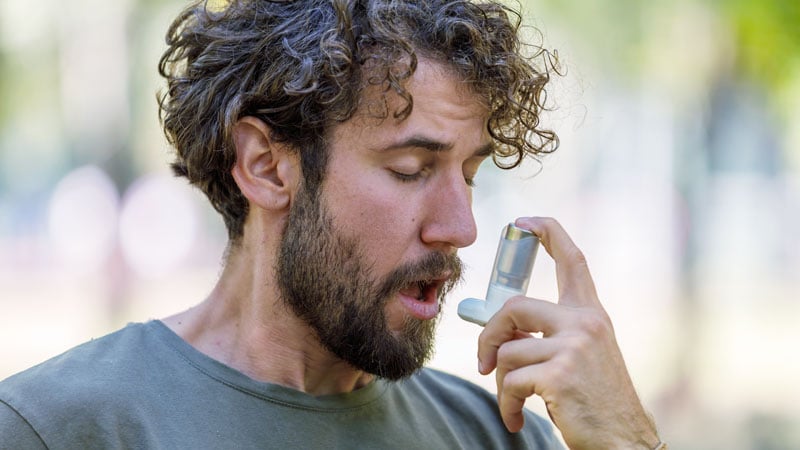 Dupilumab (Dupixient) can lead to sustained reductions in the need for oral corticosteroids (OCSs) for patients with severe asthma, and for some patients, it can eliminate the need for OCSs, as demonstrated in the parent OCS-sparing study, a 96-week, follow-up study.

Their study was published online February 22 in the journal Chest.

“The data presented here demonstrate that patients with severe OCS-dependent asthma treated with dupilumab can sustain reduction in OCS dose while also maintaining improvements in clinical outcomes,” they emphasize.

The original phase 3 VENTURE study showed that add-on dupilumab, a monoclonal antibody that blocks interleukin (IL)–4 and IL-13 at 300 mg, when injected subcutaneously every 2 weeks (q2w), significantly reduced OCS dose at week 24 by 70.1% from baseline in almost 42% of adults with severe OCS-dependent asthma compared with placebo. The same parent study also showed that add-on dupilumab reduced the rate of severe exacerbations by 59% compared with placebo, and lung function was improved by study endpoint.

“This decreased to 2.2 and 4.9 mg/day at week 48 and 1.2 and 3.0 mg/day at week 96 for the 19 dupilumab/dupilumab and 28 placebo/dupilumab patients with available OCS data at these timepoints, respectively,” the authors report. At the end of the 24-week VENTURE trial, 82.2% of the patients who received dupilumab and 53.6% of those who received placebo had achieved at least a 50% reduction in their dose of OCS from baseline.

At the end of the parent VENTURE trial, 53.3% of patients treated with dupilumab, vs only about 30% of those who received placebo, were OCS free. Of this group, 31 of 33 dual dupilumab-treated patients and all 21 placebo-dupilumab patients remained free of the need for OCS at week 48. A smaller number of patients in both groups were free of OCSs at week 96.

“The majority of VENTURE patients enrolled in TRAVERSE experienced no exacerbation over the course of the study,” the investigators note, at 75.6% in the dupilumab/dupilumab arm and 81.4% in the placebo/dupilumab arm from week 0 to 48. Even higher percentages of patients experienced no exacerbations during weeks 48 to 96 of the same study. Among the dupilumab-treated patients in VENTURE, improvements in pre-bronchodilator forced expiratory volume in 1 second (FEV1) were similarly sustained during TRAVERSE; among patients originally treated with placebo, there was a rapid improvement in FEV1 after switching to dupilumab in TRAVERSE.

For example, by week 96 of TRAVERSE, the mean change from parent study baseline in FEV1 was .25 L in dual dupilumab-treated patients, while the change was even greater, at .36 L, in the placebo/dupilumab group. Improvements seen in scores on the five-item Asthma Control Questionnaire (ACQ-5) in the original parent study were maintained through TRAVERSE. For example, at week 48 of TRAVERSE, the mean total ACQ-5 score had improved by -1.06 from baseline of VENTURE in the dual dupilumab group and by -1.21 in placebo/dupilumab group.

The most frequently reported treatment-emergent adverse events (TEAEs) were nasopharyngitis and bronchitis. Rates of severe TEAEs were relatively low and were very similar in both treatment groups. Treatment discontinuations due to AEs were also low and were similar in both groups, at 5.6% among dupilumab/dupilumab patients and 4.1% among placebo/dupilumab patients. Limitations of the study include the fact that OCS dose data were passively collected and were therefore not available for some patients.

Asked to comment on the study, Parameswaran Nair, MD, PhD, professor of medicine, McMaster University, Hamilton, Ontario, Canada, confirmed that the benefits in the parent randomized trial were indeed maintained in the 96-week follow-up TRAVERSE trial. “Additionally, those who had initially received placebo [in VENTURE] showed benefits with dupilumab [in TRAVERSE] comparable to what was observed in the original trial,” he noted in an email to Medscape Medical News. Nair cautioned that open-label studies have inherent biases, including missing data.

Despite these drawbacks, “it is reassuring that the beneficial effects of dupilumab are maintained, and they do not wear off over time by the development of anti-drug neutralizing antibodies,” he noted. Similar follow-up studies for other biologics approved for asthma have also shown similar long-term efficacy in open-label extension studies, Nair pointed out. He said it is worth keeping in mind that this particular open-label study’s main objective was not to assess efficacy but to confirm the safety of the drug.

“Dupilumab was safe over the treatment period, and it is particularly reassuring that the blood eosinophil count did not increase or cause any events of vasculitis,” Nair stressed.