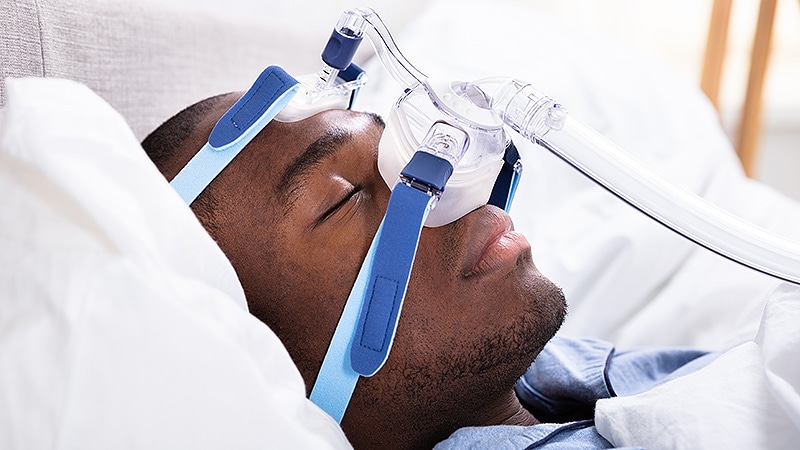 There has been a flattening of sleep apnea–related mortality rates in the United States over the past 10 years. The exception is among Black men, for whom mortality from sleep apnea has continuously increased over the past 21 years, new research shows.

“OSA (obstructive sleep apnea) has been recognized as an important cause of medical morbidity and mortality and contributes to the development of systemic hypertension, cardiovascular disease, and abnormalities in glucose metabolism,” Yu-Che Lee, MD, University at Buffalo–Catholic Health System, Buffalo, New York, and colleagues note.

“This study provides the first systematic assessment and demonstrates remarkable demographic disparities of age-adjusted sleep apnea–related mortality in the US, with higher rates in males than females and Blacks than Whites,” they conclude.

The study was published online in Sleep Medicine.

Data on sleep apnea–related mortality were obtained from the National Center for Health Statistics and were provided by the Centers for Disease Control and Prevention for the years 1999–2019. Over that 21-year interval, sleep apnea was documented as the underlying cause of death in 17,053 decedents, including 2593 Black patients and 14,127 White patients.

The authors point out that continuous positive airway pressure (CPAP) is the mainstay of therapy for adults with OSA, but many studies have demonstrated decreased CPAP adherence among Black persons. For example, one report indicated that Black persons use CPAP on average 92 minutes less a day after 1 month of therapy than do White persons, for reasons that are not well understood. Asked by Medscape Medical News why Black men are so adversely affected by sleep apnea, Lee pointed out that previous studies have shown that sleep apnea is more severe in Black men when first diagnosed.

“This is again a hypothesis,” Lee emphasized, “but perhaps health literacy among Blacks is lower than it is among White patients, and they may not realize that CPAP can improve health outcomes from sleep apnea,” he suggested. The use of CPAP requires a high level of self-advocacy, which might explain part of their noncompliance.

Other health behaviors and environmental factors may contribute to the tendency among Black patients to be noncompliant with CPAP. “I think this is the first study to show that there is a significant racial disparity in mortality from sleep apnea among Black males, and it should give physicians some insight into the problem; they can develop strategies or interventions to try and reduce racial disparities in outcomes from sleep apnea,” Lee said.

“So, this study is only the beginning, and we need to have more insight and strategies to improve outcomes among Black males,” he affirmed. Asked by Medscape Medical News to comment on the findings, Diego Mazzotti, PhD, assistant professor, Division of Medical Informatics, the University of Kansas Medical Center, felt that the study helps bring attention to existing health disparities related to sleep disorders.

“Some of the trends observed by the authors seem to explain the increased recognition that sleep apnea may be a risk factor for cardiovascular morbidity and mortality,” he said in an email.

Mazzotti added, “Trends in certain minority groups and certain regions in the US suggest that physicians need to recognize the impact of untreated sleep apnea on the cardiovascular health of these patients.”

Lee and Mazzotti have disclosed no relevant financial relationshps.