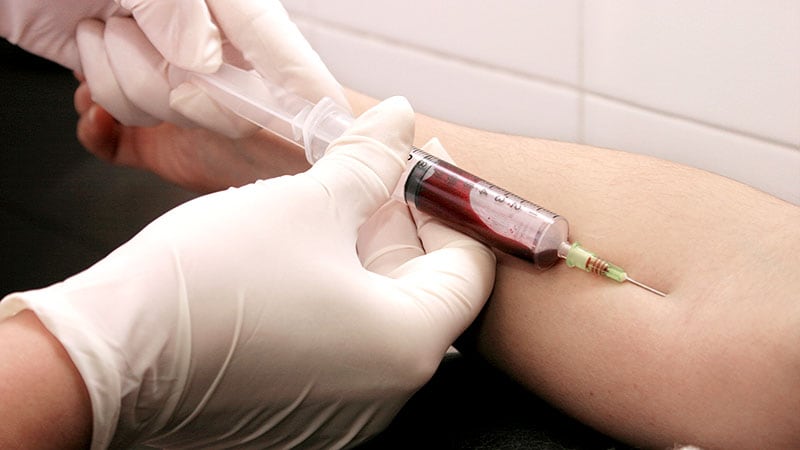 BARCELONA — A new blood test developed by Dutch researchers can identify changes in serum proteins that signal the onset of breast cancer up to 2 years before diagnosis of the disease in women who are at high risk.

The findings come from an analysis of serum samples collected from participants of the TESTBREAST study, which had enrolled 1174 women carrying BRCA gene mutations from nine centers in the Netherlands. These women had blood taken every 4 months over 10 years, giving a total of more than 3000 serum samples.

An in-depth analysis of 30 samples from three women who developed breast cancer (cases) and three who did not have the disease (controls) revealed that levels of six proteins were significantly different between the two groups up to 2 years before diagnosis.

“These proteins could form the basis for a blood test for early detection of breast cancer in women at a higher risk,” said study presenter Sophie Hagenaars, a PhD student from Leiden University Medical Center, Leiden, the Netherlands.

She presented the research at the 13th European Breast Cancer Conference on November 16, and the work was also recently published in the International Journal of Molecular Sciences.

At a press conference, lead researcher Wilma Mesker, PhD, assistant professor in the Department of Surgery at Leiden, noted that young women with BRCA mutations “have a strongly increased risk of developing breast cancer,” rising up to 72% depending on the mutation.

Consequently, there is a “strong clinical need to start screening at an earlier age and more frequently,” not least because up to 17% of these women can develop tumors during their screening intervals.

Mesker suggested that the new blood test could be used in high-risk women at intervals of every 6 months. That means that patients can “serve as their own control,” which allows for better ongoing monitoring, she added.

Hagenaars commented: “It’s important to note that we found more variation in the protein levels in the blood samples between women, compared to over time within the same woman who developed breast cancer,” she added.

“If further research validates our findings, this testing could be used as an add-on to existing screening techniques,” she explained. “Blood tests are relatively simple and not particularly painful for most people, so people could be offered screening as often as needed.”

Reacting to the new results, Laura Biganzoli, MD, co-chair of the European Breast Cancer Conference and director of the Breast Centre at Santo Stefano Hospital, Prato, Italy, commented: “If this research ultimately results in a blood test for people with a high risk of breast cancer, that could guide personalized screening and help to diagnose breast cancer at the earliest possible stage.”

During the press conference, she asked how the protein analysis could be integrated into clinical practice.

Mesker replied that this is a question that is “often asked”: If protein levels begin to rise, she said, patients will undergo an MRI scan, at which point “you could discuss with the patient” their options.

For women who would prefer to undergo preventive mastectomy, “that’s the time to perform it.”

For the study, the team analyzed the blood samples with targeted mass spectrometry to examine prediagnostic changes in protein levels. They performed a nested case–control analysis on serum samples from three women who developed breast cancer and three women who did not.

Initial analysis of these three cases and controls, who provided five serum samples each, or a total of 30 longitudinally acquired intra-patient samples, indicated that each patient had unique and identifiable patterns of protein clustering.

Mesker said: “Usually we look at patients with and without breast cancer, but when you look within the patients…we [also] found very small variations within the patient samples.” However, the differences between patients were larger than these, suggesting greater inter- than intra-patient variability, she said.

Cluster analysis of the cases and controls revealed that, out of 764 candidate proteins, there was a panel of six distinctive proteins that were significantly associated with early breast cancer onset (P < .05).

Crucially, the team found that, using both personalized and population-based cutoffs, these protein differences were present between 1 and 2 years before the clinical breast cancer diagnosis.

“For the future, we would like to validate these findings in the complete TESTBREAST cohort,” Mesker continued. The team is also collaborating with researchers internationally to allow the technique to be simplified.