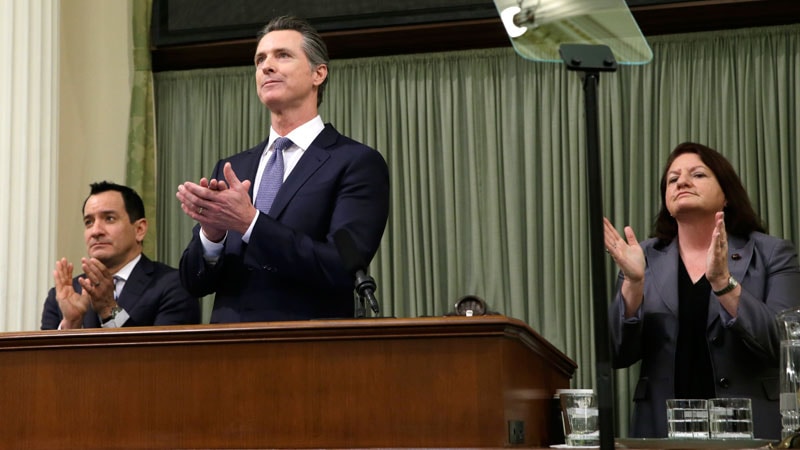 SACRAMENTO, Calif. (AP) — California voters could get a chance to add abortion protections to the state’s constitution this fall.

Gov. Gavin Newsom and top legislative leaders committed Monday to putting an amendment on the November ballot that would “enshrine the right to choose” in California.

Their comments came hours after Politico published a draft opinion from the court that revealed a majority of the nine justices want to overturn Roe v. Wade, the landmark 1973 ruling that stopped state governments from banning abortion.

If the court overturns Roe v. Wade, at least 26 states are likely to either further restrict abortion access or ban it outright, according to the Guttmacher Institute, an abortion rights advocacy group.

California won’t be one of them. Instead, Newsom has pledged to make California a sanctuary for people to come and get abortions. State legislative leaders have endorsed 13 bills to do so, including proposals that would potentially use taxpayer money to pay for people from other states to come to California for abortions.

Monday night, Newsom and legislative leaders added another proposal to their list: an amendment to the state constitution. They provided no further details, other than saying it would preserve the right to choose.

“We know we can’t trust the Supreme Court to protect reproductive rights, so California will build a firewall around this right in our state constitution,” Newsom, Assembly Speaker Anthony Rendon and Senate President Pro Tempore Toni Atkins said in a joint statement. “Women will remain protected here.”

If successful, the amendment wouldn’t change much in California, where a majority of lawmakers have repeatedly demonstrated their commitment to keeping abortion legal and accessible. But it would make it much harder for future lawmakers to repeal those protections.

Newsom’s office said its goal is to put the amendment on the ballot this November, though lawmakers will have to act quickly to make that happen. They have to vote on it before the end of June to give state officials enough time to print the ballots.

It takes a two-thirds vote of the Legislature to put a constitutional amendment on the ballot. That shouldn’t be a problem in California’s Legislature. Democrats control so many seats they could muster the necessary votes without relying on Republicans.