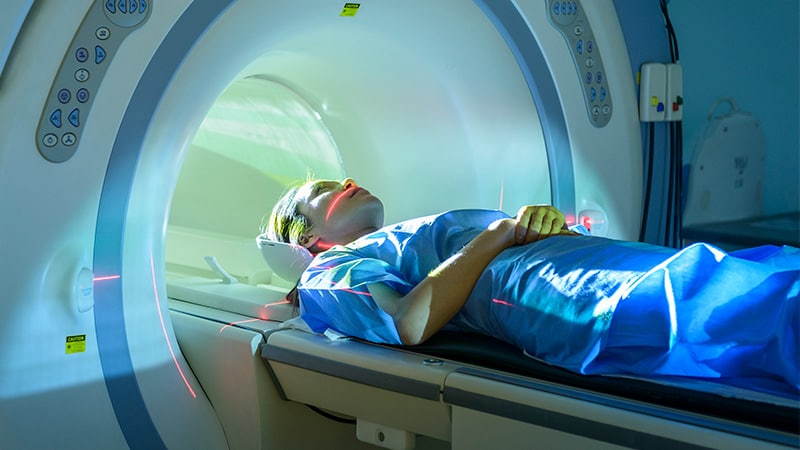 A machine learning algorithm can determine whether an individual has Alzheimer’s disease (AD) based on a single MRI scan with 98% accuracy, new research suggests.

“Currently, no other simple and widely available methods can predict Alzheimer’s disease with this level of accuracy, so our research is an important step forward,” Eric Aboagye, PhD,  Imperial College London, who led the research, said in a news release.

“Many patients who present with Alzheimer’s at memory clinics do also have other neurological conditions, but even within this group our system could pick out those patients who had Alzheimer’s from those who did not,” he added.

The study was published online June 20 in Communications Medicine.

To develop the algorithm, Aboagye and colleagues divided the brain into 115 regions and allocated 660 different features, such as size, shape, and texture, to assess each region. They trained the algorithm to identify where changes to these features could accurately predict AD.

Using data from the Alzheimer’s Disease Neuroimaging Initiative (ADNI), the team tested their algorithm on brain scans from more than 400 patients with early and later stage AD, healthy controls, and patients with other neurologic conditions, including frontotemporal dementia and Parkinson’s disease.

In 98% of cases, the MRI-based machine learning tool alone could accurately predict whether an individual had AD, outperforming standard hippocampal volume and cerebrospinal fluid (CSF) amyloid-beta measurements. It could also distinguish between early- and late-stage AD in 79% of patients.

The tool was “robust and repeatable across MRI scans, demonstrating its potential for applicability in clinical practice in the future,” the researchers write.

“Most patients will go through quite a raft of tests to get to diagnosis and this tool may lead to a quicker diagnosis and reduce anxiety for patients. And of course, the specialist may be able to use this information to refine and modify the diagnosis,” said Aboagye.

The algorithm also spotted changes in areas of the brain not previously associated with AD, including the cerebellum and the ventral diencephalon.  This “opens up opportunities for researchers” to look more into these areas and see how they may relate to dementia, Aboagye said.

“Although neuroradiologists already interpret MRI scans to help diagnose Alzheimer’s, there are likely to be features of the scans that aren’t visible, even to specialists,” co-investigator Paresh Malhotra, PhD, with Imperial College London, said in the release.

“Using an algorithm able to select texture and subtle structural features in the brain that are affected by Alzheimer’s could really enhance the information we can gain from standard imaging techniques,” Malhotra said.

“Scaling this to clinical practice will require additional replication of these results as well as software optimized for the clinical environment,” said Raji.

Funding for this research was provided in part by Imperial College London NIHR Biomedical Research Centre and the Alzheimer’s Disease Neuroimaging Initiative (ADNI). Aboagye, Malhotra, and Raji have reported no relevant financial relationships.