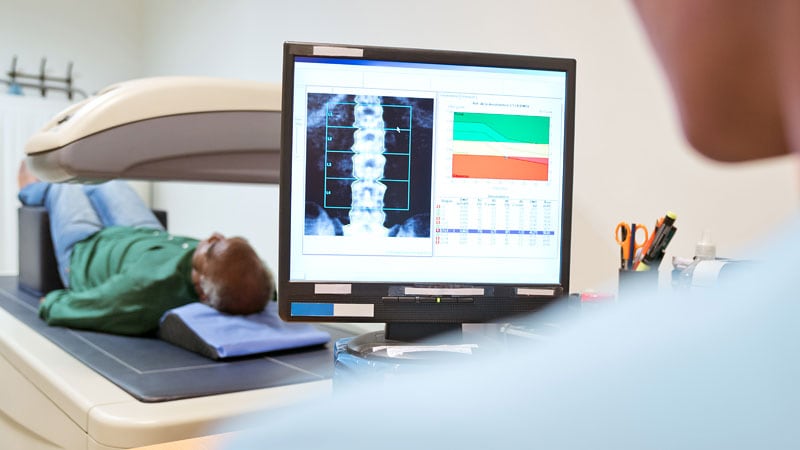 Bone densitometry scans may be a novel, noninvasive, and scalable way to identify older women at risk of developing dementia, new research suggests.

In an analysis of more than 900 study participants, women in their 70s with more advanced abdominal aortic calcification (AAC) seen on lateral spine images during dual-energy x-ray absorptiometry (DEXA) had a two- to fourfold higher risk for late-life dementia than those with low AAC.

This finding was independent of cardiovascular risk factors and apolipoprotein E (APOE ) genotype.

“While these results are exciting, we now need to undertake further large screening studies in older men and women using this approach to show that the findings are generalizable to older men and can identify people with greater cognitive decline,” co-investigator Marc Sim, PhD, Edith Cowan University, Joondalup, Australia, told Medscape Medical News.

“This will hopefully open the door to studies of early disease-modifying interventions,” Sim said.

Late-life dementia occurring after age 80 is increasingly common because of both vascular and nonvascular risk factors.

Two recent studies in middle-aged and older men and women showed that AAC identified on bone densitometry was associated with poorer cognition, suggesting it may be related to cognitive decline and increased dementia risk.

This provided the rationale for the current study, Sim noted.

The researchers assessed AAC using DEXA lateral spine images captured in the late 1990s in a prospective cohort of 958 older women who were participating in an osteoporosis study.

AAC was classified into established low, moderate, and extensive categories. At baseline, all women were aged 70 and older, and 45% had low AAC, 36% had moderate AAC, and 19% had extensive AAC.

Results showed that, compared with women who had low AAC, women with moderate and extensive AAC were more likely to experience late-life dementia hospitalization (9.3% low, 15.5% moderate, and 18.3% extensive) and death (2.8%, 8.3%, and 9.4%, respectively).

After multivariable-adjustment, women with moderate AAC had a two- and threefold increased relative risk for late-life dementia hospitalization or death compared with their peers who had low AAC.

Women with extensive AAC had a two- and fourfold increase in the adjusted relative risk for late-life dementia hospitalization or death.

“To our knowledge this is the first time it has been shown that AAC from these scans is related to late-life dementia,” Sim said.

“We demonstrated that AAC improved risk prediction in addition to cardiovascular risk factors and APOE genotype, a genetic risk factor for Alzheimer’s disease, the major form of dementia,” he added.

Sim noted “these additional lateral spine images” can be taken at the same time that hip and spine bone density tests are done.

“This provides an opportunity to identify AAC in large numbers of people,” he said.

He cautioned, however, that further studies with detailed dementia-related phenotypes, brain imaging, and measures of cognition are needed to confirm whether AAC will add value to dementia risk prediction.

Commenting on the findings for Medscape Medical News, Claire Sexton, DPhil, senior director of scientific programs and outreach at the Alzheimer’s Association, noted that AAC is a marker of atherosclerosis and is associated with vascular health outcomes.

Therefore, it is “not surprising it would be associated with dementia too. There’s been previous research linking atherosclerosis and Alzheimer’s disease,” Sexton said.

“What’s novel about this research is that it’s looking at AAC specifically, which can be identified through a relatively simple test that is already in widespread use,” she added.

Sexton noted that “much more research” is now needed in larger, more diverse populations in order to better understand the link between AAC and dementia — and whether bone density testing may be an appropriate dementia screening tool.

“The good news is vascular conditions like atherosclerosis can be managed through lifestyle changes like eating a healthy diet and getting regular exercise. And research tells us what’s good for the heart is good for the brain,” Sexton said.