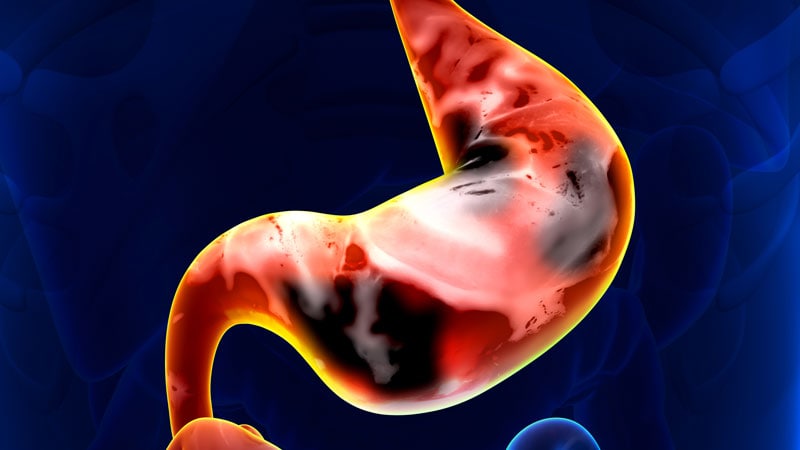 A new French study raises the possibility that immunotherapy can help some people with stomach cancer avoid surgery.

GERCOR NEONIPIGA was a phase 2 study with no comparator group and only 32 patients, but even so, after a 6-cycle course of nivolumab and ipilimumab, there was no sign of tumor in 17 of the 29 patients (59%) who had surgery specimens evaluable by pathology.

Indeed, two patients refused surgery after their preop endoscopic biopsies came back clear with no tumor cells. Surgery was called off in a third patient who developed metastases beforehand.

After a median of 12 months follow-up, there was no recurrence or progression in 30 patients (94%). The remaining two included the metastatic patient and one who died 3 days after surgery from cardiovascular complications.

If the findings pan out with additional research, the approach could be a boon for people who respond. “Avoiding surgery is a dream for these patients,” said lead investigator Thierry Andre, MD, a medical oncology professor at Sorbonne University, Paris, when he presented the findings at the American Society of Clinical Oncology Gastrointestinal Cancers Symposium.

The trial “raises the question whether surgery can be delayed or avoided in some patients with localized” disease. Given the findings, “it seems possible not for all but probably for half, maybe more.” As in the two subjects who opted out of surgery, preop endoscopic biopsies could be used to identify complete responders with active surveillance afterwards, he said.

The study included 16 patients with gastric cancer and 16 with esophagogastric adenocarcinoma. They were mismatch repair deficient, which Andre said predicts response to immunotherapy.

At baseline, 22 had stage T3 disease and four had stage T2 disease, and stage was not evaluable by echo-endoscopy in 6. Nodal status was unknown, but the patients had no metastases at baseline.

They underwent six nivolumab 240-mg infusions and two ipilimumab 1—mg/kg infusions over 12 weeks, followed by R0 resections a median of 5 weeks after the last nivolumab injection.

Surgical specimens from 17 patients (59%) showed a complete pathological response to neoadjuvant immunotherapy (Becker tumor regression grade (TRG) 1a, ypT0N0). TRG was 1b — less than 10% residual tumor in tumor bed in four patients. TRG was 2 in two patients with 10%-50% of residual tumor remaining, and six had a TRG of 3 with more than half of the tumor remaining after immunotherapy.

Based on tumor response, 25 patients had nine additional nivolumab infusions after surgery with 480 mg infused monthly.

Andre explained that people want to avoid surgery because of the substantial morbidity that was shown in the study, plus 54% of patients had complications, including anastomotic leaks, pancreatitis, pneumonia, and other problems.

There were no new safety signals with neoadjuvant therapy; 25% of patients had grade 3 or 4 events.

The study was conducted in 10 centers in France. About three-quarters of the subjects were men and the median age was 65 years.

Bristol Meyers Squibb supplied the nivolumab and ipilimumab and partially funded the work. Many of the investigators had ties to the company, including Andre, who is a consultant for BMS and reported payments from the company.