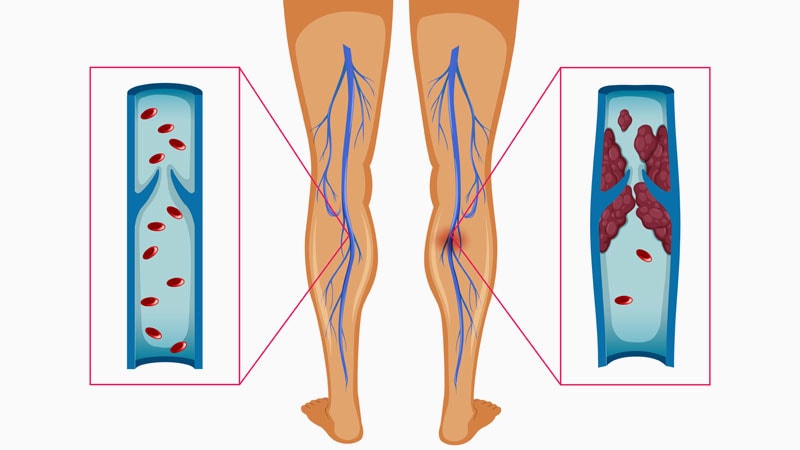 More than 70% of cancer patients do not know that they are at greater risk of deep vein thrombosis (DVT) than the general population. It is up to their physician to discuss this with them.

This link is explained by the authors of an article in Cancer Treatment and Research Communications that reports results of a survey carried out by the European Cancer Patient Coalition (ECPC). “The aim of this pan-European patient survey was to assess patient awareness and knowledge about cancer-associated thrombosis (CAT), including risk factors, signs and symptoms, and interventions, to better prevent and treat CAT,” write the authors. “The idea was to create a sort of starting point for subsequent communication and information strategies and for comparing the results of any action taken in this area,” they add.

A roundtable discussion that included oncology healthcare professionals, policymakers, and patient advocates was convened to discuss and review the evidence regarding their ongoing concerns of excessive CAT-associated morbidity and mortality, as well as patients’ desire for greater CAT awareness.

“These discussions demonstrated that very little change had occurred over the years and that greater knowledge about CAT was still needed across the spectrum of healthcare practitioners and patients, particularly regarding primary and secondary prevention of thrombosis,” the authors write.

It was from this starting point that the idea for the pan-European survey was born. The ECPC, widely viewed as the “unified voice of cancer patients across Europe,” led the survey. This survey spanned six countries (France, Germany, Greece, Italy, United Kingdom, and Spain) and involved 1365 patients and caregivers. The ECPC survey result was originally released at World Thrombosis Day in late 2018.

In an interview, Anna Falanga, MD, the main author of the article and professor of hematology at the University of Milan-Bicocca, Italy, reviewed the results and explained how to improve knowledge of CAT among patients with cancer.

“Data support that up to 20% of patients with cancer will experience venous thromboembolism (VTE), which is approximately 4–5 times higher than the general population,” said Falanga, who is also chief of the Department of Immunohematology and Transfusion Medicine and the Thrombosis and Hemostasis Center at the Hospital Papa Giovanni XXIII, in Bergamo, Italy.

“We have known about the link between thrombosis and cancer since the 19th century, but it has taken until midway through the last century for our level of understanding and awareness of the problem to reach its current level. Initially, this was limited to fundamental research, with large advances in our understanding of the mechanisms of the link between the two; it has only been more recently that we have had clinical studies that have piqued the interest of healthcare professionals, who were previously uninterested in the topic,” she said.

One piece of data stands out from the European survey: nearly three quarters of respondents (72%) said that before taking part in the survey, they were not aware that people with cancer have a higher-than-normal risk of developing thrombosis. “We asked participants to rate their overall understanding of CAT on a scale of 1 (low) to 10 (high), with the average (mean) score obtained being 4.1. Only 21% of patients gave a rating of 7 or above (high understanding). The average rating was very similar in the different countries surveyed,” write the authors. They note that the survey also assessed how much participants had learned about the topic from their physicians.

Approximately 35% of patients were made aware of CAT either immediately before or at the time of their cancer diagnosis. Of particular concern, one quarter (26%) of respondents (the largest proportion) noted that they first became aware of CAT when they suffered a blood clot. The average rating was very similar in the different countries surveyed. “Let us not forget that cancer and cancer treatments themselves cause a number of side effects, some of which can be very serious, so in some ways, a clot might be seen as a minor problem. Yet, in reality, it isn’t. It is a significant cause of death and disease in cancer patients,” said Falanga.

The report containing the full results of the European survey goes even further, since, in addition to its overall results, it also gives information about individual countries.

The data from Italy, which are based on 246 persons, show that only 27% of patients and caregivers were aware of the increased risk of thrombosis after a cancer diagnosis. This figure is in line with the overall results of the survey, although the average score of the 10-point scale was lower for the Italy cohort (3.3/10 vs 4.1/10).

Most respondents reported that they got information about cancer-associated thrombosis verbally, usually from their hospital doctor (11%). Some respondents (6%) said that they found out about it from their own research, usually online. Almost 1 in 4 patients (24%) in Italy said that they first became aware of CAT when they suffered a blood clot. Answers to questions about knowledge of symptoms show that 58% of Italian patients and caregivers know that swelling of the lower limbs can be a symptom of DVT, and the same percentage knows that shortness of breath might indicate PE.

In terms of preventive action, the picture in Italy is somewhat variable: 74% of participants were aware of the importance of walking, but far fewer knew about the need to stop smoking (57%) and stretch the legs (35%). Of the 41% of Italians who were also taking an anticoagulant drug, 53% said that they knew about the possible side effects of such medication.

“The high rate of CAT suggests that, despite the clinical evidence and clear guideline recommendations for patients with cancer, CAT prevention and recognition remain low among healthcare professionals,” the authors write.

The results of the ECPC survey further confirm those of previous studies, highlighting patients’ lack of knowledge about CAT and the need for more in-depth discussions between physician and patient.

So, what can be done? As highlighted by previous studies, “patients’ experiences are an education in themselves, particularly for the oncology care team,” the authors write. “Once the patient has a thrombosis, the opportunity for thrombosis prevention, which should be the most crucial focus of the care clinics (surgical, oncology, and palliative care), is gone,” they add.

“Oncology professionals, as well as other members of the patient’s care team (eg, internists, surgeons, nurses), need to perform better, at every stage of the patient’s cancer pathway, to ensure patients are aware of CAT and their individual risk to develop a blood clot,” said Falanga. He explained that in this group, it is the general practitioner who is the first contact. “These professionals are on the front line of the battle; they are among the first healthcare workers given the chance to suspect a clot and should, therefore, be fully aware of the increased risk in oncology patients,” she reiterated.

Experts agree on the fact that a multidisciplinary approach is of utmost importance in this context: the different roles in the team must be clear. “It is also fundamental to establish who does what in terms of educating and informing the patient,” said Falanga.

The researchers also put forward an example of a successful initiative: the Venous Thromboembolism Prevention in the Ambulatory Cancer Clinic (VTE-PACC) program. The initiative was developed by experts from the University of Vermont and was described in a recent article in JCO Oncology Practice.

Numerous resources are available online to help physicians talk to their patients and explain the risks linked to CAT along the continuum of cancer care. Among them is a resource titled, “Cancer Associated Thrombosis (CAT): Be Clot Conscious,” which can be found on the ECPC’s website.

“We have a collective responsibility using the ECPC patient survey as a baseline to inform patients with cancer on how to identify signs and symptoms of CAT to enable faster diagnosis and treatment,” the authors conclude.