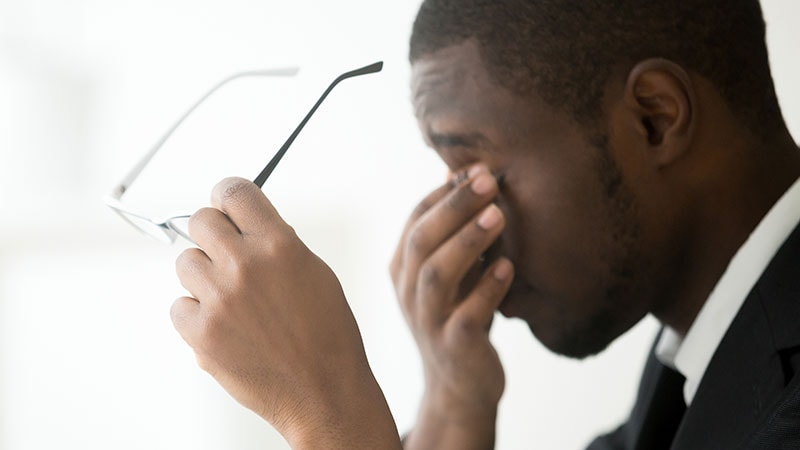 The American folk hero John Henry pitted his hammer against a mechanical steam drill, only to die of exhaustion after winning the battle. In the legend, John Henry was African American, and it’s a fitting metaphor, according to Justin Xavier Moore, PhD.

It’s a metaphor for accumulated stress over a lifetime, also known as allostatic load. Though it affects everyone, Black, Indigenous, and people of color experience it in excess. “It serves as a symbolism for the plight of African Americans within the United States, that regardless of all the triumph and trying to overcompensate and work just as hard as your counterpart, it oftentimes leads to this overtaxing or exhaustion because your competitor has an unfair advantage. You have Jim Crow laws in the South. We have the history of slavery. We have individuals of racial subgroups that are exposed daily to microaggressions, racial discrimination, stereotypes, redlining, all of these different issues that basically reduce to systemic racism,” said Moore, who is an assistant professor of medicine at the Medical College of Georgia, Augusta.

Moore is also a coauthor of a new study published online in SSM–Population Health, which examined the association between increased allostatic load and cancer outcomes among participants in the National Health and Nutrition Examination Survey (NHANES) and the National Death Index. They found that both non-Hispanic Black and non-Hispanic White adults with high allostatic load had about a doubled risk of cancer death.

To determine allostatic load, the researchers looked at nine factors collected in NHANES: abnormal values of BMI, diastolic blood pressure, glycohemoglobin, systolic blood pressure, total cholesterol, serum triglycerides, serum albumin, serum creatinine, and C-reactive protein. “The fact that we’re looking at cardiovascular, metabolic and immune function, all in one gives us a better risk assessment for morbidity and mortality. Allostatic load has actually been associated with cardiovascular disease. I think we are one of the first studies to actually look at whether allostatic load is associated with cancer mortality,” said Moore.

Previous research coauthored by Moore showed 20-year old African Americans have an allostatic load comparable with that seen in 30-year-old non-Hispanic Whites. That can lead to a proinflammatory state that might be causing increased cancer risk. But stress isn’t a simple concept to pin down, Moore said. “One of the founding fathers of public health research and epidemiology, Paracelsus, [said] ‘the dose makes the poison.’ “

In this case, it means that not all stress is bad. Exercise is good stress. “Your heart rate goes up, you compete, and then it comes back down. That’s healthy. But then there’s those stressful situations like dealing with a horrible job, and a boss that may just be overdemanding. Deadlines, and not having a work-life balance. Too much stress, in this case, can cause cancer death,” Moore said.

In the study, both non-Hispanic Black adults and non-Hispanic White adults heightened risk of cancer death when dealing with high allostatic load, even though the cause of stress may be different. “It’s almost like the cause of the stress does not matter as much. There are millions of Americans that live in environments that are not conducive to their health. The fact of the matter is that because of racial discrimination, because all these different biases, African Americans may have higher allostatic load, which they did on an average, but high allostatic load for even White people is associated with dying from cancer,” Moore said.

Moore has no relevant financial disclosures.