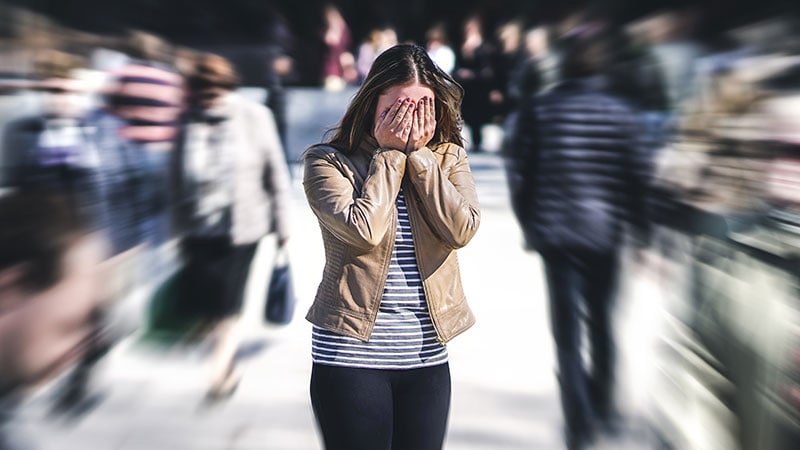 A new “comprehensive” model integrating a variety of factors may help flag individuals at risk for recurrence or persistence of panic disorder (PD), new research suggests.

Investigators based in France and the United States analyzed data for almost 800 patients with DSM-IV–diagnosed  PD.

Results showed that having a “general psychopathology factor,” defined as the shared effects of all comorbid conditions, or PD liability, significantly and independently predicted 3-year recurrence or persistence of PD symptoms.

Having a lower physical health-related quality of life (QOL), a greater number of stressful life events, and not seeking treatment at baseline were also significant and independent predictors.

The findings were published online July 25 in the Journal of Clinical Psychiatry.

PD is a disabling disorder with a “chronic course” — and a recurrence rate ranging from 25% to 50%, the investigators note.

“Because of the heterogeneous course of PD, there is a need to develop a comprehensive predictive model of recurrence or persistence,” they write. This could “help practitioners adapt therapeutic strategies and develop prevention strategies in high-risk individuals.”

Most previous studies that have investigated risk factors for PD recurrence and persistence have relied on clinical samples, often with limited sample sizes.

Moreover, each risk factor, when considered individually, accounts for only a “small proportion” of the variance in risk, the researchers note. The co-occurrence of these risk factors “suggests the need to combine them into a broad multivariable model.”

However, currently proposed integrative models do not identify independent predictors or mitigate the influence of confounding variables. To fill this gap, the investigators conducted a study using structural equation modeling “to take into account multiple correlations across predictors.”

They drew on data from 775 participants (mean age, 40 years) in the National Epidemiologic Survey on Alcohol and Related Conditions (NESARC). For the current analysis, they examined two waves of NESARC (2001 – 2002 and 2004 – 2005) to “build a comprehensive model” of the 3-year recurrence or persistence of PD.

The researchers used a “latent variable approach” that simultaneously examined the effect of the following five groups of potential predictors of recurrence or persistence:

Psychiatric diagnoses were determined on the basis of the AUDADIS-IV (Alcohol Use Disorder and Associated Disabilities Interview Schedule-IV). Participants also completed Version 2 of the Short Form 12-Item Health Survey, which assesses both mental and physical QOL over the previous 4 weeks.

Among participants with a 12-month diagnosis of PD at wave 1, 13% had persistent PD and 27.6% had recurrent PD during the 3-year period. The mean duration of illness was 9.5 years.

A greater number of lifetime panic attacks, the presence of any Axis I or II comorbid disorder, and any Axis I disorder, especially social anxiety disorder, were significantly associated with 3-year risk for recurrence and for persistence.

Sweating, choking, paresthesias, the comorbid disorders of mania/hypomania and general anxiety disorder, nicotine dependence, lower mental and physical QOL scores, and exposure to a greater number of stressful life events in the previous year were all significantly associated with 3-year risk for recurrence.

As shown in the following table, only variables shown with a P value were statistically significant, “with the a priori fixed at .05,” the researchers note.

A combination of psychopathology factors, such as the shared effect of all comorbid psychiatric conditions, PD liability, lower physical health-related QOL, more life stressors during the past year, and not seeking treatment at baseline “significantly and independently” predicted recurrence or persistence of symptoms between the two waves (all Ps, < .05), the investigators report.

One study limitation cited was that several psychiatric disorders known to be associated with PD recurrence or persistence, such as borderline personality disorder, were not examined. Additionally, the study used a 3-year follow-up period — and the results might have differed for other follow-up time frames, the researchers note.

Nevertheless, the findings constitute a “comprehensive model” to predict recurrence and persistence of PD, they write. Moreover, early treatment-seeking behavior “should be promoted, as it may reduce the risk of recurrence,” they add.

Commenting for Medscape Medical News, Peter Roy-Byrne MD, professor of psychiatry, University of Washington School of Medicine, Seattle, noted, “there is not much that is new here.”

Roy-Byrne, who was not involved with the study, said that a “general theme for years has been that more severe illness, whether you measure it by greater number of other Axis I disorders or symptom severity or a general psychopathology factor, usually predicts worse outcome — here codified as persistence and recurrence.”

In addition, the study “did not examine another very important factor: the degree of social connection/social support that someone has,” Roy-Byrne said. However, “perhaps some of this was contained in specific life events,” he added.

The National Epidemiologic Survey on Alcohol and Related Conditions was sponsored by the National Institute on Alcohol Abuse and Alcoholism. Scheer reports no relevant financial relationships. The other investigators’ disclosures are listed in the original paper. Roy-Byrne is the coeditor-in-chief of UpToDate Psychiatry, a section editor on depressive disorders, and a senior consulting editor for psychiatry for NEJM Journal Watch.