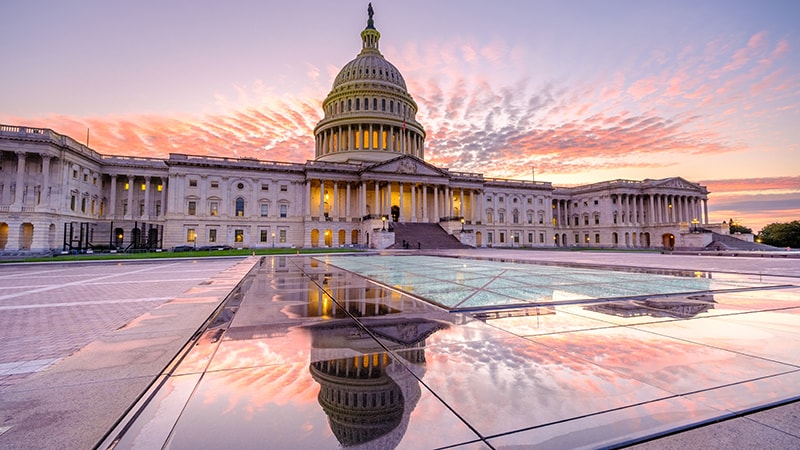 Congress’ top doctor urged lawmakers Monday to move to a “maximal telework posture,” citing “unprecedented” numbers of COVID-19 cases at the Capitol that he said are mostly breakthrough infections of people already vaccinated.

The seven-day average rate of infection at the Capitol’s testing center has grown from less than 1% to more than 13%, Brian P. Monahan, the attending physician, wrote in a letter to congressional leaders obtained by The Associated Press.

Monahan said there have been “an unprecedented number of cases in the Capitol community affecting hundreds of individuals.” Citing what he said was limited sampling as of Dec. 15, he said about 61% of the cases were the new, highly contagious omicron variant while 38% were the delta variant.

While providing no figure, he said “most” cases at the Capitol are breakthroughs. Of those testing positive, 35% are asymptomatic, he said.

Monahan’s letter came as the worldwide spread of the omicron variant has prompted a deluge of COVID-19 cases, now averaging 400,000 reported new infections in the U.S. daily. The growing caseloads have caused cascading absentee rates at workplaces around the country including among schools, health care providers, airlines, police and fire departments and other essential workers, sparking concerns that disrupted services will only worsen in the near future.

“The daily case rates will increase even more substantially in the coming weeks,” Monahan warned.

Congress has been in recess since mid-December. The Senate returned Monday and held an abbreviated 17-minute session, but postponed a scheduled evening vote after Washington was hit by several inches of snow. The House was not due to return to the Capitol until next week.

Spokespersons for Senate Majority Leader Chuck Schumer, D-N.Y., and House Speaker Nancy Pelosi, D-Calif., did not immediately have information on whether Monahan’s letter might prompt any changes in Congress’ operations. Regular lunches that Senate Democrats have together were expected to be virtual only for at least this week, said two people familiar with the emerging plans who spoke only on condition of anonymity.

Monahan urged congressional offices and agencies — which employ thousands of food service, custodial and other workers who serve Congress — to reduce in-person activities “to the maximum extent possible” by using electronic communications instead.

Currently, the House requires lawmakers and aides to wear masks in the House chamber except when they’ve been recognized to speak and in most other settings in the Capitol and House office buildings. The Senate encourages mask wearing but doesn’t require it.

Mask wearing is “a critical necessity unless the individual is alone in a closed office space or eating or drinking in a food service area,” he said.

Republican lawmakers and aides from both chambers are markedly less likely than Democrats to wear masks around the Capitol, with some rejecting widespread scientific acceptance that proper mask wearing can reduce the risk of spreading COVID-19 infections. Lawmakers can be fined up to $2,500 each time they don’t wear a mask on the House floor, under a resolution the chamber approved last year, and several have been penalized.

Monahan said breakthrough cases have not led to any deaths or hospitalizations among vaccinated lawmakers or congressional staff.

But he said that while people who’ve received two vaccinations and a booster generally suffer mild symptoms, even those can lead to six to 12 months of “long COVID.” That could include serious cardiovascular, neurological and cognitive problems, he said.