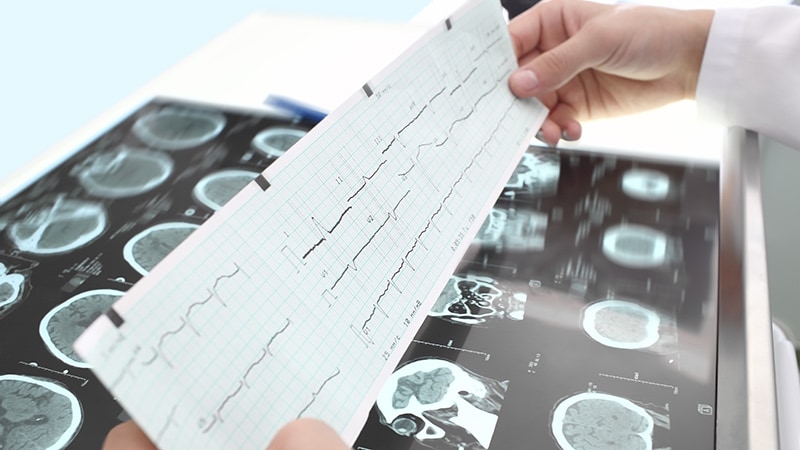 The risk for dementia goes up in patients with atrial fibrillation (AF), but some evidence suggests that risk can be blunted with therapies that restore sinus rhythm. But a new cohort study suggests that the treatment effect’s magnitude might depend on the rhythm control strategy. It hinted that AF catheter ablation might be more effective than pharmacologic rhythm control alone at cutting the risk for dementia.

The case-matched study of more than 38,000 adults with AF saw a 41% reduction (P < .0001) in risk for dementia among those who underwent catheter ablation after attempted rhythm control with antiarrhythmic drugs (AAD), compared with those managed with pharmacologic rhythm control therapy alone.

The observational study comprising 20 years of data comes with big limitations and can’t say for sure whether catheter ablation is better than AAD-only at cutting the dementia risk in AF. But it and other evidence support the idea, which has yet to be explored in a randomized fashion.

In a secondary finding, the analysis showed a similar reduction in dementia risk from catheter ablation, compared with AAD, in women and in men by 40% and 45%, respectively (P < .0001 for both). The findings are particularly relevant “given the higher life-long risk of dementia among women and the lower likelihood that women will be offered ablation, which has been demonstrated repeatedly,” Emily P. Zeitler, MD, MHS, Dartmouth-Hitchcock Medical Center, Lebanon, New Hampshire, told theheart.org | Medscape Cardiology. “I think this is another reason to try to be more generous in offering ablation to women.”

Management of AF certainly evolved in important ways from 2000 to 2021, the period covered by the study. But a sensitivity analysis based on data from 2010 to 2021 showed “no meaningful differences” in the results, said Zeitler, who is slated to present the findings April 30 at the Heart Rhythm Society 2022 Scientific Sessions, conducted virtually and live in San Francisco.

Zeitler acknowledged that the observational study, even with its propensity-matched ablation and AAD cohorts, can only hint at a preference for ablation over AAD for lowering risk for AF-associated dementia. “We know there’s unmeasured and unfixable confounding between those two groups, so we see this really as hypothesis-generating.”

It was “a well-done analysis,” and the conclusion that the dementia risk was lower with catheter ablation is “absolutely correct,” but only as far as the study and its limitations allow, agreed David Conen, MD, MPH, McMaster University, Hamilton, Ontario, Canada, who is not a coauthor.

“Even with propensity matching, you can get rid of some sorts of confounding, but you can never get rid of all selection bias issues.” That, he said when interviewed, takes randomized trials.

Conen, who is studying cognitive decline in AF as a SWISS-AF trial principal investigator, pointed to a secondary finding of the analysis as evidence for such confounding. He said the ablation group’s nearly 50% drop (P < .0001) in competing risk for death, compared with patients managed with AAD, isn’t plausible.

The analysis was based on US insurance and Medicare claims data from AF patients who either underwent catheter ablation after at least one AAD trial or filled prescriptions for at least two different antiarrhythmic agents in the year after AF diagnosis. Patients with history of dementia, catheter or surgical AF ablation, or a valve procedure were excluded.

The ablation and AAD-only groups each consisted of 19,066 patients after propensity matching, and the groups were balanced with respect to age, sex, type of insurance, CHA2DS2-VASc scores, and use of renin-angiotensin-system inhibitors, oral anticoagulants, and antiplatelets.

Zeitler pointed to a randomized trial now in the early stages called Neurocognition and Greater Maintenance of Sinus Rhythm in Atrial Fibrillation, or NOGGIN-AF, which will explore relationships between rhythm control therapy and dementia in patients with AF, whether catheter ablation or AAD can mitigate that risk, and whether either strategy works better than the other, among other goals.

“I’m optimistic,” she said, “and I think it’s going to add to the growing motivations to get patients ablated more quickly and more broadly.”