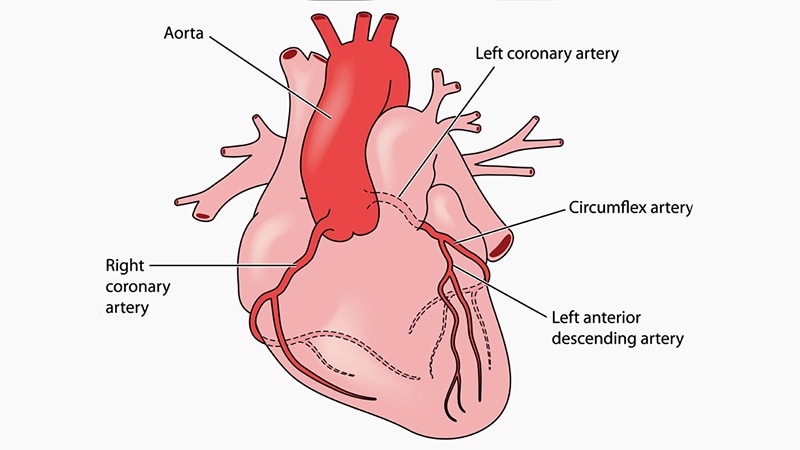 In a randomized trial of patients with angina and no obstructive coronary artery disease (ANOCA), 6 weeks of treatment with diltiazem did not improve coronary vasomotor dysfunction — apart from epicardial spasm — or angina symptoms and quality of life.

Treatment success, the primary study endpoint — defined as normalization of one of the abnormal endotypes and no normal endotype becoming abnormal — was similar after treatment with diltiazem compared to placebo. Nor were there significant differences for secondary endpoints apart from improvements in epicardial spasm in the two groups.

Tijn Jansen, MD, presented these findings from the Efficacy of Diltiazem to Improve Coronary Microvascular Dysfunction: A Randomized Clinical Trial (EDIT-CMD) in a featured clinical research session at the American College of Cardiology (ACC) 2022 Scientific Session in Washington, DC. The study was simultaneously published online April 2 in JACC Cardiovascular Imaging.

“We were surprised indeed” that diltiazem did not meet its primary endpoint for successful treatment and did not reduce symptoms or improve quality of life compared with placebo, unlike results of the CorMicA trial, he told theheart.org | Medscape Cardiology in an email.

“We did find a treatment success, however, of 21%, which was slightly lower than expected, but it was not better than just giving placebo. This was similar regarding symptoms and quality of life, where we did find an overall improvement with diltiazem, but again not higher than using placebo,” he added. “It seems that giving the diagnosis to these patients itself creates a reduction in symptoms,” that might be due to a reduction in stress, Jansen suggested.

The clinical implication, he said, is that more randomized controlled trials in this patient population are needed to permit evidence-based patient-tailored treatment, based on the different endotypes. “It might even be imaginable to test effectiveness in each individual patient using coronary function testing,” he said.

These tests are more and more commonly used in clinical practice, Jansen noted. “In the Netherlands, we recently launched the NL-CFT registry, which enables the participating centers to perform the CFT with a standardized protocol, with the goal to collect data and increase knowledge in this patient population.”

“I think probably the reason this trial was negative is [that coronary vasomotor dysfunction is] just too heterogeneous,” assigned discussant, C. Noel Bairey Merz, MD, commented.

This is a “nice example” of a pragmatic, point-of-care trial in all comers that tests effectiveness as opposed to efficacy, “where we nail down every single thing,” such as in a trial for regulatory approval of a new drug, added Bairey Merz, from Cedars Sinai, Los Angeles, California.

“The problem with effectiveness trials is that you get a very heterogeneous population, and not everything works for everyone,” she said.

“This was a strategy trial — too heterogenous and too small to assess each endotype response,” Bairey Merz elaborated in an email to theheart.org | Medscape Cardiology.

“Calcium channel blockers [CCBs] will not [effectively] treat all endotypes of coronary microvascular dysfunction,” she added, noting that the 6-month CorMIcA trial demonstrated in a larger, more rigorous trial design that CCBs are effective for epicardial and microvascular spasm.

“If you were going to do this study again, would you allow physicians to do uptitration and/or go a little bit longer?” Bairey Merz asked Jansen during the discussion.

“I do think this is a very heterogeneous group,” he agreed. However, the protocol allowed researchers to titrate diltiazem from 120 mg/day to 360 mg/day, he noted.

“If I were to do it again,” Jansen said, “I would focus on one specific endotype, probably epicardial spasm.”

First RCT of Diltiazem in Patients With ANOCA

Up to 40% of patients undergoing coronary angiography for stable angina do not have obstructive coronary artery disease (CAD), and 60% to 90% of these patients have coronary vasomotor dysfunction, Jansen noted.

A recent European Society of Cardiology position paper on ANOCA “recommends the use of various pharmacological treatments including calcium-channel blockers (CCBs), beta-blockers, ACE-inhibitors, statins, and nitric oxide modulators, of which CCBs have the most prominent role in both endotypes of coronary vasospasms” and coronary microvascular dysfunction, they write.

“However, evidence substantiating these recommendations is lacking,” the researchers add, “since it is based on studies in a different population, with small sample sizes, or not placebo-controlled.”

To investigate this, between 2019 and 2021, EDIT-CMD enrolled 126 adults aged 18 years and older who had two or more chronic angina episodes per week and no signs of obstructive CAD, who were seen at three hospitals specializing in ANOCA in the Netherlands.

The participants underwent coronary function testing that consisted of an acetylcholine spasm provocation test to evaluate for epicardial spasm and microvascular spasm, and a bolus thermodilution test with adenosine, to assess CFR and IMR. Coronary microvascular dysfunction was defined as CFR less than 2.0 and IMR of 25 or greater.

Of 99 patients with vasospasm or microvascular dysfunction, 85 patients were randomly assigned to receive diltiazem (n = 41) or placebo (n = 44) for 6 weeks.

The patients in both groups had a mean age of 58 years, and 29% were male; 22% had previously undergone percutaneous coronary intervention, and 48% had severe angina (Canadian Cardiovascular Society grade III/IV).

After 6 weeks, 73 patients (35 in the placebo group and 38 in the diltiazem group) were available for repeat coronary function testing.

For the primary outcome, after 6 weeks of treatment, the proportion of patients with normalization of one abnormal parameter of coronary vasomotor dysfunction, without any normal parameter becoming abnormal, occurred in 8 patients (21%) in the diltiazem group vs 10 patients (29%) in the placebo group (P = .46)

In secondary outcomes, after 6 weeks of treatment, there were no significant differences in the prevalence of microvascular dysfunction, in Seattle Angina Questionnaire scores for angina symptoms, or RAND-36 scores for quality of life between patients who received diltiazem vs those who received placebo.

However, more patients in the diltiazem group than in the placebo group progressed from epicardial spasm to microvascular or no spasm (47% vs 6%; P = .006).

The EDIT-CMD trial was sponsored by Abbott. Jansen has no relevant financial disclosures. The disclosures of the other authors are listed with the article. Bairey Merz discloses having a fiduciary role and shares in iRhythm and being on the advisory board for Sanofi.