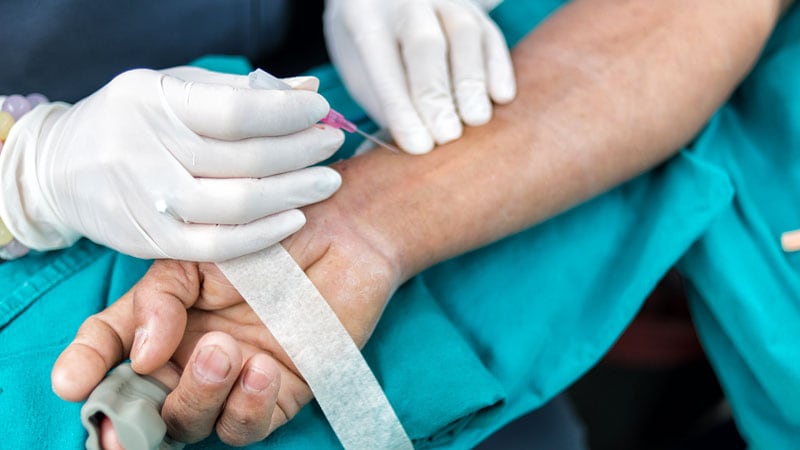 Distal radial access is not superior to conventional radial access with regard to radial artery occlusion (RAO) but is a valid alternative for use in percutaneous procedures, according to results of the DISCO RADIAL trial.

The primary endpoint of forearm RAO at discharge was not met, occurring in 0.31% of patients whose radial artery was accessed distally (DRA) at the anatomical snuffbox and in 0.91% of patients with conventional transradial access (TRA) in the intention-to-treat analysis (P = .29).

“The message first is that if you do a good job with transradial access you can end up with a lower [occlusion] rate,” said coprincipal investigator Adel Aminian, MD, Hôpital Civil Marie Curie, Charleroi, Belgium. “On the other hand, it’s a tradeoff between a more demanding puncture for distal radial access but also a simpler hemostatic process, which I think is one of the main advantages of distal radial access.”

The results were presented during the Congress of the European Association of Percutaneous Coronary Interventions (EuroPCR 2022) held in Paris and online, and published simultaneously in JACC: Cardiovascular Interventions.

DISCO-RADIAL (DIStal versus COnventional RADIAL Access for Coronary Angiography and Intervention) is the largest trial thus far to compare TRA with the distal radial snuffbox technique, which has shown promise for reducing RAO rates in the recent single-center randomized DAPRAO and ANGIE trials.

The trial was conducted at 15 sites across Europe and Japan in 1309 patients with an indication for percutaneous coronary procedures using the 6Fr Glidesheath Slender (Terumo). The intention-to-treat population included 657 TRA patients and 650 DRA patients.

The two groups were well matched, with most having a chronic coronary syndrome. Operators had to have performed a minimum of 100 procedures by DRA and follow systematic best practices previously reported by the investigators to prevent RAO, Aminian said.

“These results establish compliance to best practice recommendations for RAO avoidance as a mandatory new reference in transradial practice,” Aminian concluded. “At the same time, distal radial artery arises as a valid alternative associated with higher crossover rates but with a simpler and shorter hemostasis process.”

A show of hands revealed that about 25% of the audience used distal radial access prior to the presentation but that enthusiasm fell off following the results.

Discussant Hany Eteiba, MD, Glasgow Royal Infirmary, Scotland, said, “I salute your enthusiasm for presenting a negative trial and you tried to persuade the audience to use the distal radial artery results, but nonetheless.”

Eteiba said he could see a “potential advantage in the shorter hemostasis time,” and asked whether it might be influencing the rapid turnover for day-case angioplasty.

Aminian responded that “if you do an angioplasty you have to keep the patient for a certain amount of time, but I think for your nurse work and for the health care resources, having a very short hemostasis time is very interesting. We started with a hemostasis time of 2 hours and now we’ve decreased it to 1 hour and it will decrease even more.”

Aminian said that one message from the trial is that people who are using transradial access “have to do a better job,” and reminded the audience that RAO rates at many centers are too high, at 10% or upward.

At the same time, Aminian cautioned that operators wanting to use distal radial access “need to master the technique” or they will “end up with a relatively high failure rate.”

Discussant Eliano Navarese, MD, Nicolaus Copernicus University, Toruń Poland, said, “I still think that it is a very valid approach, we use it for almost 20 years…but it is very true, it is very demanding. And the learning curve of 100 cases in the trial maybe needed more cases.”

In an accompanying editorial, Grigorios Tsigkas, MD, PhD, University of Patras, Rio Patras, Greece, and colleagues write that the incidence of forearm RAO was “surprisingly low” but could be even lower if the authors administered adequate anticoagulation.

Still, they write that distal transradial access “for coronary procedures in combination with the systematic implementation of best practices for RAO prevention may be the final solution against RAO.”

The editorialists suggest that exposure to radiation could be the “main limitation of this novel vascular approach” and that forthcoming trials, such as DOSE, could shed light on this issue.

Increased procedure times in the DISCO RADIAL and ANGIE trials are secondary in stable patients, Tsigkas said, but could be a limitation in patients presenting with ST-segment elevation myocardial infarction (STEMI). Ongoing research, such as the RESERVE trial from China and a Korean trial, will provide insights into the safety and feasibility of distal transradial access in STEMI.

Congress of the European Association of Percutaneous Coronary Interventions (EuroPCR) 2022. Presented May 17, 2022.