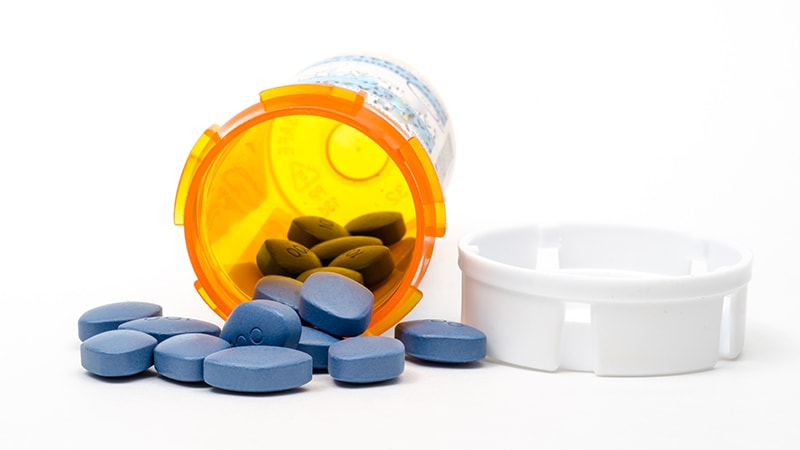 Sildenafil (Viagra, Pfizer), a phosphodieterase-5 (PDE-5) inhibitor and a pulmonary-selective vasodilator, may reduce mortality in patients with idiopathic pulmonary fibrosis (IPF), compared with placebo or standard of care but it does not reduce hospitalizations or acute exacerbations from the disorder, a small meta-analysis suggests.

“There have only been four trials investigating sildenafil [in IPF] and the results were very close to being statistically significant so the addition of a few events would cause that to be true,” Tyler Pitre, MD, McMaster University, Hamilton, Ont., and Dena Zeraatkar, PhD, Harvard Medical School, Boston, told this news organization in a joint email.

The study was published online in Pulmonary Pharmacology & Therapeutics.

As the investigators pointed out, the most recent international guidelines have a conditional recommendation against the use of sildenafil in IPF patients so reanalysis of the data was felt to be necessary in order to inform upcoming guidelines. The purpose of the review was to provide an update of the evidence as to whether sildenafil not only provides mortality benefit in this patient population but also whether it improves overall lung function, reduces exacerbations and hospitalizations along with adverse events (AEs) leading to drug discontinuation.

The four studies included in the meta-analysis were all randomized, controlled trials in which either standalone PDE-5 inhibitors were compared with placebo or with standard IPF care with either pirfenidone (Esbroef ) or nintedanib (Ofev). The age of participants across the trials ranged from 68.6 years to 70.4 years and participants were predominantly male.

Follow-up ranged from just 12 weeks to 52 weeks. “Four trials including 659 patients and 88 deaths, reported on mortality,” the investigators noted. At a relative risk reduction of 0.73 (95% confidence interval, 0.51-1.04), the investigators concluded with moderate certainty that sildenafil probably reduces mortality in IPF patients.

Four trials including 659 patients reported on acute exacerbations and hospitalizations. At a RR of 1.10 (95% CI, 0.61-1.67), pooled results showed sildenafil may not reduce hospitalizations or acute exacerbations, compared with controls, although this conclusion was reached with low certainty. Four trials containing slightly more patients at 661 participants reported on AEs leading to drug discontinuation.

Again with moderate certainty, the authors concluded there is probably no difference in drug discontinuation rates because of AEs when comparing sildenafil to controls, at a RR of 0.79 (95% CI, 0.56-1.10). Four trials including 602 patients reported on lung function changes while diffusion capacity of carbon monoxide (DLCO) results were available for 487 patients. Based on these four trials, sildenafil may not change the decline of forced vital capacity (FVC) at a mean difference of 0.61% (95% CI, –0.29 to 1.59), compared with standard of care or placebo.

Nor may it change the rate of DLCO decline at a MD of 0.97 (95% CI, 0.04-1.90), both outcomes again being rated with moderate certainty. Asked if the combination of either nintedanib plus sildenafil or pirfenidone plus sildenafil led to a mortality benefit in IPF patients, Pitre and Zeraatkar noted that there was no mortality benefit in either the INSTAGE trial or in another recent study published in Lancet Respiratory Medicine.

“However, both of these trials were quite small and therefore unlikely to detect a mortality benefit,” Pitre and Zeraatkar noted. Indeed, the benefit of doing a systematic review is the ability to pool event rates across trials to see if a benefit emerges as well as to evaluate the consistency of the direction of these effects.

“Our review presented the most up-to-date and comprehensive summary of the evidence on sildenafil therapy for IPF patients,” the authors stated.

While they did acknowledge that the mortality benefit seen with sildenafil over placebo or standard of care did not reach statistical significance, this was likely because of too few patients and events. For example, in a systematic review published in the New England Journal of Medicine in 1988, the authors were able to show a statistically significant benefit on 5-year mortality risk with the combination of tamoxifen and cytotoxic therapy whereas none of the individual trials analyzed were able to detect a mortality benefit because they were underpowered.

“Similarly, we suggest that something like this is possible with sildenafil, as the three major trials addressing sildenafil show the same direction toward benefit with little inconsistency,” Pitre and Zeraatkar noted.

“We should not exclude benefits based on P values alone,” they said, adding: “Clearly out systematic review is not going to change clinical practice given the uncertainty of the results but I do think that in a disease such as IPF, further research is warranted in targeted patient populations [and] for clinicians, we suggest they keep an open mind to sildenafil.”

Asked to comment on the findings, Krishna Thavarajah, MD, director of the interstitial lung disease program at Henry Ford Hospital and clinical assistant professor at Wayne State University, both in Detroit, agreed with the authors that the lack of a statistically significant mortality benefit seen in the meta-analysis does not necessarily translate into a lack of benefit from the use of sildenafil in IPF patients. “As the authors point out, there are simply not enough data available to know if there is a mortality benefit, limited by the variable follow-up times and IPF patients targeted with or without pulmonary hypertension.”

Indeed, Thavarajah felt that a mortality benefit might be difficult to show in IPF patients, especially those on antifibrotics, given the duration of the studies analyzed and the number of patients needed to be able to show a statistically significant difference. “I myself have not prescribed sildenafil for IPF patients given the lack of clear data,” Thavarajah acknowledged.

No funding for the study was reported. Neither the authors nor Thavarajah had any conflicts of interest to declare.