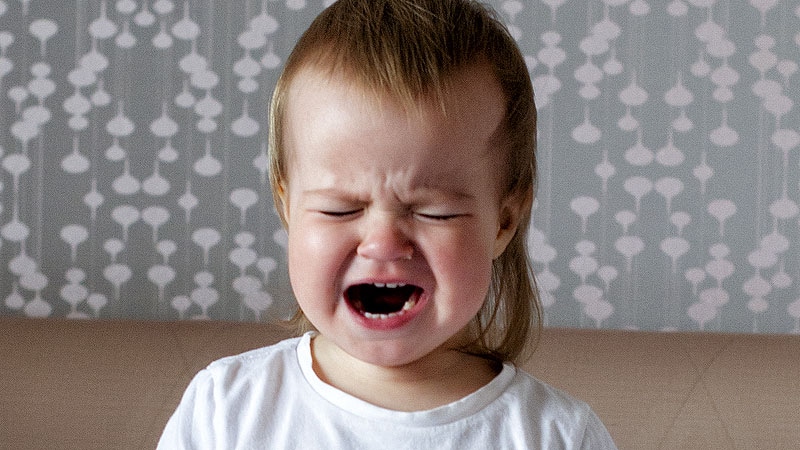 Almost every parent has been here: Their toddler is screaming in the middle of the cereal aisle or throwing a tantrum in another public place. When reason fails, you hand over a phone or tablet that plays a video, app, or other digital pacifier. Problem solved.

But while using mobile devices to soothe outbursts is fine sometimes, new research suggests that doing so too often could delay a child’s ability to manage their emotions productively.

“When you see that tantrum bubbling up in your child, if your usual go-to is to quiet it down by handing them a phone, I would encourage parents to rethink that,” says Jenny S. Radesky, MD, a pediatrician at the University of Michigan, who led the study.

The new research, published in  JAMA Pediatrics , tracked 366 3- to 5-year-olds with typical development patterns. Parents rated how likely they were to give their children mobile devices to calm them down at the beginning of the study, and then 3 and 6 months later.

Throughout the study, parents logged how often their kid’s mood or feelings suddenly changed, and researchers used these logs to measure which children were more emotionally reactive. Parents also noted how often their children rushed into new situations.

After 6 months, the children of parents who were the most likely to use mobile devices for calming were more emotionally reactive. Boys were more likely than girls to show reactive tendencies, as were the children who rushed into new situations more often.

Radesky says the results are solid enough to guide parental decisions. In particular, she encourages parents not to reward tantrums with quick access to a phone or tablet, as doing so could become a vicious circle.

“It could be that kids realize, ‘Hey, when I have a tantrum, everything shuts down, and I don’t have to do the thing I don’t want to do,'” Radesky says.

She also sees a potential cost to adults. Parents who quickly turn to mobile devices in stressful situations could be depriving themselves of the opportunity to learn effective parenting techniques, like teaching their children to breathe or to express their displeasure with words rather than destructive actions.

“It’s getting in the way of parents practicing, ‘All right, I’m going to stay calm and I’m going to try to figure out what’s going on in this little kid’s brain,'” Radesky says.

She advises parents to come up with ways to handle tantrums in advance, such as having stickers on hand to give to kids who begin yelling in the grocery store. They also can try to make their child laugh, or provide a quick snuggle. As a last resort, a parent can give a child a tablet, but with pre-downloaded videos about emotional regulation for a potential teaching moment. Parents also should take care when using their own mobile devices around their children. In another study published earlier this year,  researchers in the United States and the Netherlands found that 5- to 12-year-olds whose parents used their phones around them more often were less likely to be emotionally attuned to the needs of others.

Robin Nabi, PhD, a communications scholar at the University of California in Santa Barbara and a co-author of the phone study, says when it comes to digital devices, parental choices are critical in helping children build emotional skills.

“It’s not, ‘Don’t give your kid a tablet,’ because that’s not going to happen,” she says. “The questions are: How do you do it? When do you do it? How often do you do it? It would be a lot more productive for parents to have that kind of advice rather than just saying, ‘Don’t do it.'”

JAMA Pediatrics: “Longitudinal Associations Between Use of Mobile Devices for Calming and Emotional Reactivity and Executive Functioning in Children Aged 3 to 5 Years.”