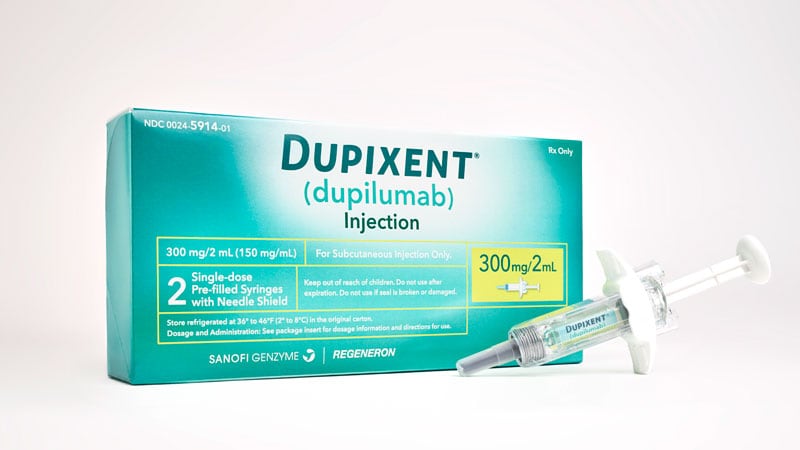 MONTREAL — Ocular surface disease (OSD) in patients with atopic dermatitis (AD) treated with dupilumab may be exacerbated rather than caused by the therapy, according to a study presented at the annual meeting of the International Society of Atopic Dermatitis (ISAD).

In a prospective trial of 69 patients with AD starting dupilumab (Dupixent), baseline OSD was found in 91.3%, with about half of these patients reporting no symptoms, said investigator Roselie Achten, MD, from the National Expertise Center for Atopic Dermatitis at University Medical Center Utrecht, the Netherlands. Among these patients, ophthalmologic assessment revealed no OSD in six patients, mild OSD in 37 patients, but moderate and severe disease in 20 and six patients, respectively, she said, adding that 71% of the group also reported allergic conjunctivitis at baseline.

The patients enrolled in the study who started dupilumab were aged 36-38 years, with Eczema Area and Severity Index (EASI) scores of 14.7-16.5. Baseline ocular surface health was assessed with the Utrecht Ophthalmic Inflammatory and Allergic disease (UTOPIA) score. Tear fluid was collected to analyze biomarkers and dupilumab levels, and impression cytology was performed to collect conjunctival tissue cells for analysis of goblet cells. These measurements were repeated at 4 and 28 weeks after the start of therapy.

In a subset of 48 patients, the researchers also detected significantly higher tear fluid dupilumab levels among those patients with more severe OSD, with comparable serum levels.

OSD has been reported in up to 34% of dupilumab-treated patients with AD and is the most frequently reported side-effect of this treatment, noted Achten. This side-effect is not reported by other patients treated with dupilumab for other indications, she added, “suggesting that AD patients may have a predisposition to develop OSD during dupilumab treatment.”

Indeed, as recently noted by Vivian Shi, MD from the Department of Dermatology, University of Arkansas for Medical Sciences, and colleagues, “for reasons not well understood, the incidence of conjunctivitis in dupilumab patients with asthma (0%-2.3%), chronic rhinosinusitis with nasal polyps (1.6%), or eosinophilic esophagitis (0%) is low to none; thus, patients with AD may be particularly susceptible.”

Achten said that dupilumab-treated patients with AD at her center are prescribed topical tacrolimus and ketotifen eyedrops if they develop OSD.

Asked for comment, Melinda Gooderham, MD, who moderated the session, was impressed with the study. “I’d heard about the goblet cells, there were little bits of data here and there, but the tear analysis is something I hadn’t seen before. It was a nice series of experiments that pulled everything together,” she told Medscape Medical News.

Gooderham, who is assistant professor at Queens University, in Kingston, Ontario, Medical Director at the SKiN Centre for Dermatology in Peterborough, Ontario, and consultant physician at Peterborough Regional Health Centre, said that she first began noticing dupilumab-related OSD as an early trial investigator for the drug. “When you put some patients on the drug it’s almost like tipping the balance — that little bit of mucin they’re dependent on is now reduced and it makes them more symptomatic,” she said.

Though she prescribes lubricating eye drops as prophylaxis for all her dupilumab-treated patients with AD, she recommends referring any patients who develop OSD to an ophthalmologist who is familiar with this specific side-effect. “If they just see a random ophthalmologist who doesn’t know dupilumab, and doesn’t know the story around it, they could get any sort of diagnosis, or even be told to stop the medication altogether.”

The study was sponsored by Sanofi. Achten disclosed no other conflicts of interest. Gooderham is an investigator with Sanofi Genzyme for dupilumab.