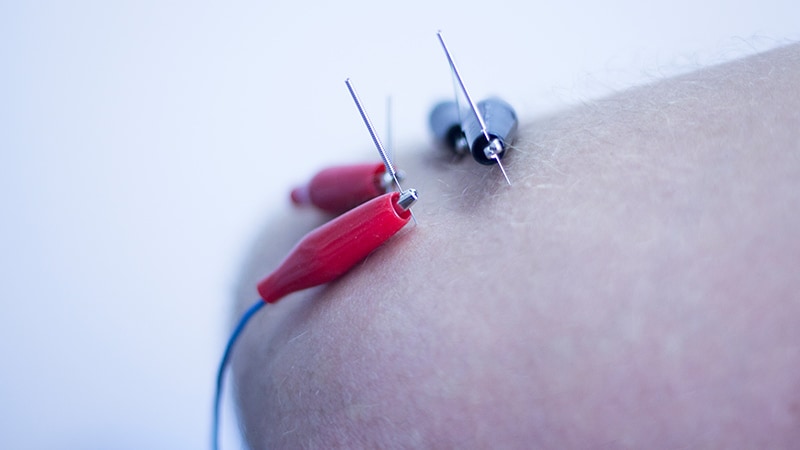 The EA group also showed significant improvement in depression, insomnia, self-rated anxiety, and total sleep time — all of which were not found in the SA or control groups.

The findings were published online July 7 in JAMA Network Open.

“Sleep disturbance is the prominent symptom in patients with depression,” the investigators note.

Depression and sleep issues have a bidirectional relationship, in that “poor sleep quality contributes to the development of depression, and having depression makes a person more likely to develop sleep issues,” they write.

Patients with co-occurring depression and sleep disorders are more difficult to treat and have a greater risk for relapse and recurrence of depression, they add.

Acupuncture may be an “effective drug-free approach to help treat mental illness and sleep disorders,” the researchers note. A previous study suggested acupuncture may improve sleep efficacy and prolong total sleep in patients with primary insomnia.

“EA is the combination of traditional Chinese acupuncture with electric-impulse stimulation, and it can enhance the therapeutic effect of the acupoints throughout the needle retention time,” Xu said.

A previous pilot study of EA for depression-related insomnia showed significant improvements in sleep quality after EA treatment, but the sample size was small.

The current researchers, therefore, undertook the present study — with a larger sample size and comparison with SA and standard care. They divided 270 adults (mean age, 50.3 years; 71.9% women) at three tertiary hospitals in Shanghai into three groups, each consisting of 90 participants.

Patients with secondary depressive disorders due to other conditions, medication, or psychotic disorders were excluded, as were patients with a history of alcohol abuse or drug dependence or those who had received acupuncture within the previous year.

Of the patients who completed the 8-week intervention, 83 were in the EA group, 81 in the SA group, and 83 in the control group. Almost all participants (91.5%) completed all outcome measurements by the end of the 24-week follow-up period (also known as week 32).

At the 8-week posttreatment assessment, which was the primary endpoint, the EA group had a mean reduction from baseline of 6.2 points (95% CI, −6.9 to −5.6) in PSQI score.

In addition, the EA group showed significant improvement in depression scores compared with the SA and control groups at both 8 and 32 weeks (all Ps < .001).

In addition, they had lower scores on the ISI and the Self-rated Anxiety Scale, and longer total sleep time, compared with the control group at week 8.

None of the participants reported any serious adverse events.

“The acupoints we used in this trial mainly act on calming mind, relieving negative mood, and balancing the yin-yang,” Xu added.

Commenting for Medscape Medical News, Albert Yeung, MD, ScD, associated director of the Mass General Depression and Clinical Research Program and associate professor of psychiatry, Harvard Medical School, Boston, Massachusetts, said that, with the evidence from this study, “acupuncture and/or electroacupuncture could be a viable adjunctive treatment for depressed patients who suffer from insomnia.”

Yeung, who was not involved with the study, is the co-author of an accompanying editorial.

“More well-designed studies are warranted to provide evidence for integrating holistic treatment in medicine,” he said.

Batya Swift Yasgur, MA, LSW is a freelance writer with a counseling practice in Teaneck, New Jersey. She is a regular contributor to numerous medical publications, including Medscape and WebMD, and is the author of several consumer-oriented health books as well as Behind the Burqa: Our Lives in Afghanistan and How We Escaped to Freedom (the memoir of two brave Afghan sisters who told her their story).