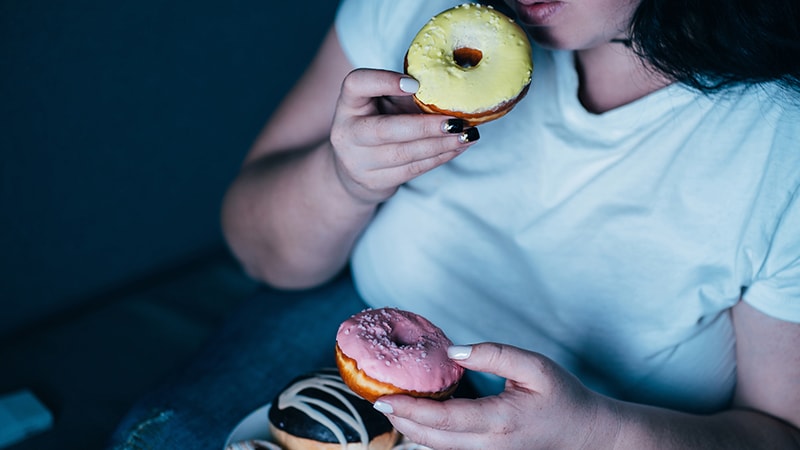 However, for reasons that aren’t clear, not all individuals lose weight while taking them.

Emotional eating is the tendency to eat in response to negative emotions to relieve stress, often while disregarding internal satiety signals. High scores on measures of emotional eating are associated with obesity, less weight loss from interventions including bariatric surgery, and weight regain after weight loss.

The findings from the new study, which used MRI in people with obesity and type 2 diabetes, were recently published in Psychoneuroendocrinology by Charlotte van Ruiten, MD, research physician in the Diabetes Center at Amsterdam University Medical Center, The Netherlands, and colleagues.

Emotional eating scores are also associated with brain alterations in areas of reward processing, such as the amygdala, anterior cingulate cortex, orbitofrontal cortex, and insula, van Ruiten and colleagues explain.

“It has been suggested that around 60% of people with obesity are also emotional eaters; the prevalence in women is reported higher than in men. However, exact numbers are currently unknown,” van Ruiten told Medscape Medical News.

In the new study, individuals with higher baseline emotional eating scores were found to be less sensitive to the central effects of GLP-1 agonist treatment. Thus, she said, “If weight loss with a GLP-1 agonist is less than expected, clinicians should screen for eating behavior, including emotional eating.”

Several assessments for emotional eating are available, including the Dutch Eating Behavior Questionnaire (DEBQ), which was used in this study, the Three-Factor Eating Questionnaire, or a mindful eating scale, van Ruiten advised.

And for those who score positively for emotional eating and don’t lose weight as expected with a GLP-1 agonist, “it may be better to switch to another drug, such as a sodium-glucose cotransporter-2 [SGLT2] inhibitor, or the emotional eating itself could be addressed.”

“The therapeutic processes should put emphasis on mindful eating skills, as training in mindful eating has been shown to be associated with improved emotional dysregulation and with less mood-craving,” van Ruiten advised.

The randomized crossover study included 20 participants aged 40-65 years with metformin-treated type 2 diabetes, all with a body mass index (BMI) above 26 kg/m2. They were treated for 12-week periods with either 0.6-1.2 mg/day SC of the GLP-1 agonist liraglutide (Victoza, Novo Nordisk) — which at the time was only approved for type 2 diabetes but has subsequently been approved for obesity — or insulin glargine, separated by a 12-week washout period.

Functional MRI was used at 10 days and 12 weeks of treatment to examine brain responses to food cues by baseline eating behavior during the two periods.

When given chocolate milk to drink versus a tasteless solution, those with higher baseline emotional eating scores showed less pronounced liraglutide-induced increases in brain responses compared with insulin glargine in the left caudate nucleus (P = .069) and left insula (P = .072).

After 12 weeks, these associations were no longer significant.

This suggests that “external eating may also decrease, whereas restraint eating may increase the sensitivity to the treatment effects of GLP-1 [agonists]. These insights may help to optimize treatment strategies for obesity and to select patient groups with better efficacy of GLP-1 agonist treatment,” the authors write.

Similar Effects Beyond Diabetes and Medication?

Asked whether similar findings might be expected among people with obesity who do not have type 2 diabetes, or with other weight loss interventions, van Ruiten responded affirmatively to both.

“Similar responses could be expected in people with obesity without type 2 diabetes. Even more robust effects may be expected,” she hypothesized, noting that it would also be “interesting to find out if this holds true for the higher dose of liraglutide” of 3.0 mg/day (marketed as Saxenda, Novo Nordisk, for treating obesity, which was not available when the study was conducted).

And, she said, “If other weight-lowering drugs also induce satiety via the [central nervous system], then similar results may be expected,” noting that emotional eaters also respond with less weight loss following bariatric surgery.

This work was supported in part by a grant from Novo Nordisk. Van Ruiten has reported no relevant financial relationships.