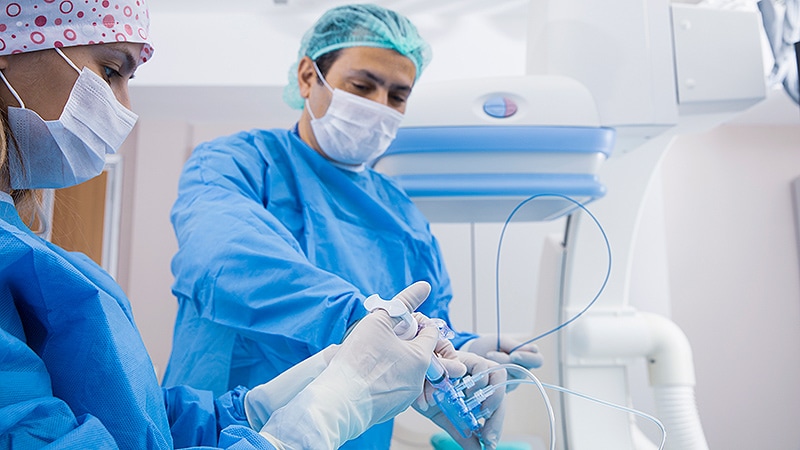 A new subanalysis of the FAME 3 trial, which failed to show that percutaneous intervention (PCI) guided by fractional flow reserve (FFR) is noninferior to coronary artery bypass grafting (CABG) for treating three-vessel coronary artery disease, has associated PCI with early quality of life (QOL) advantages, according to findings presented at the annual scientific sessions of the American College of Cardiology.

Despite a modestly greater risk of major adverse cardiac events (MACE) at the end of 12 months’ follow-up among those treated with FFR-guided PCI, the greater QOL early after the procedure might be relevant to patients weighing these options, according to Frederik M. Zimmerman, MD, of Catharina Hospital in Eindhoven, the Netherlands.

“FFR-guided PCI results in a faster improvement in quality of life than CABG during the first year after revascularization, and it improved working status in patients younger than 65 years of age,” Dr. Zimmermann said.

The primary results of FAME 3 were presented at the 2021 Transcatheter Cardiovascular Therapeutics annual meeting by lead author William F. Fearon, MD, of Stanford (Calif.) University and published simultaneously in the New England Journal of Medicine.

Rather than confirming the hypothesis that FFR-guided PCI is comparable with CABG for the primary composite MACE outcome death from any cause, myocardial infarction, stroke, or revascularization, the incidence of MACE at 12 months was 10.6% in those randomized to PCI and 6.9% in the group assigned to CABG.

This translated into a hazard ratio for MACE of 1.5, signifying a 50% increase in risk for FFR-guided PCI relative to CABG for the primary outcome, a difference that negated the study definition of noninferiority (P = .35).

In this new health-related subanalysis, which was published simultaneously with his ACC presentation, the groups were compared over 12 months for QOL as measured with European Quality of Life–5 dimensions (EQ-5D) scale, angina as measured with the Canadian Cardiovascular Classification (CCC) system, and employment.

Outcomes Data Available In >85% of Patients

Of the 1,500 patients enrolled and randomized in FAME 3 (757 to FFR-guided PCI and 743 to CABG), this health outcomes subanalysis was performed with complete data at 12 months from 89% of those in the PCI group and 88% of those in the CABG group.

Ultimately, the study did not show differences in any of these measures at the end of 12 months, but there were significant differences in QOL and employment at earlier time points. In particular, the significantly different (P < .001) trajectory for QOL improvement at 1 and 6 months favored FFR-guided PCI whether evaluated with the EQ-5D instrument or an EQ visual analog scale.

Rates of angina defined by as CCC class of at least 2 were low after revascularization in both arms of the study, negating any opportunity for differences, but patients aged younger than 65 years were almost twice as likely to have returned to full- or part-time work 1 month after revascularization (60.2% vs. 33.1%), and they remained at higher odds for working at 12 months (68.1% vs. 57.4%).

In patients aged older than 65 years, return-to-work rates did not differ significantly at any time point.

These results suggest potentially clinically meaningful early advantages for FFR-guided PCI, but some experts questioned the rationale for reporting positive secondary findings from a negative trial.

“This subanalysis is curious,” said Allen Jeremias, MD, director of interventional cardiology research, Saint Francis Hospital, Roslyn, N.Y. He pointed out that reporting these data is an anomaly.

“CABG was found to be better, so why look at QOL,” said Dr. Jeremias, who was an ACC-invited expert to discuss the results. However, he went on to say, “this could be an exception to the rule.”

The reason, according to Dr. Jeremias, is that the absolute difference at 12 months between FFR-guided PCI and CABG for the MACE events of greatest concern – death, MI, or stroke – was only about 2% greater in the FFR-guided PCI group (7.3% vs. 5.2%). The biggest contributor to the difference in MACE in FAME 3 at 12 months was the higher rate of repeat revascularization (5.9% vs. 3.9%).

In the context of a modest increase in risk of MACE and the lower rate of several important treatment-related adverse events, the QOL advantages identified in this subanalysis “might be a reasonable topic for patient-shared decision-making,” Dr. Jeremias suggested.

He granted the possibility that well-informed patients might accept the modestly increased risk of MACE for one or more of the outcomes, such as a higher likelihood of an early return to work, that favored FFR-guided PCI.

This is the point of this subanalysis, agreed Dr. Zimmermann.

“It is all about shared decision-making,” he said. Also emphasizing that the negative trial endpoint of FAME 3 “was driven largely by an increased risk of revascularization,” he believes that these new data might be a basis for discussions with patients weighing relative risks and benefits.

There are more data to come, according to Dr. Zimmermann, who said that follow-up of up to 5 years is planned. The 3-year data will be made available in 2023.