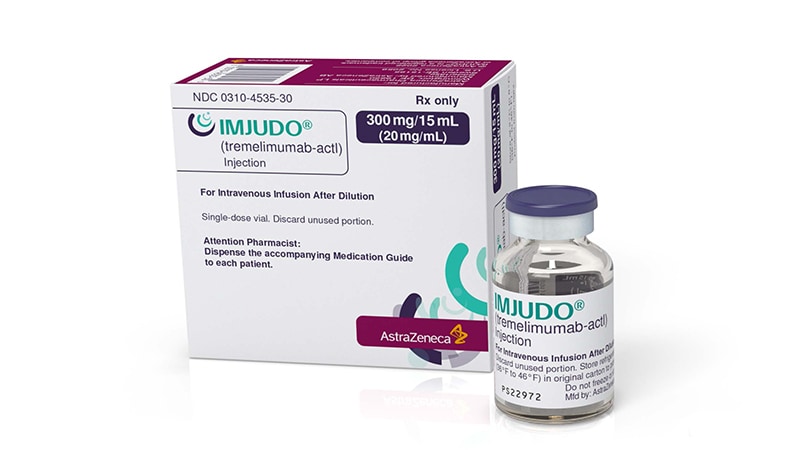 The US Food and Drug Administration (FDA) has approved a new immunotherapy combination for use in the treatment of unresectable hepatocellular carcinoma (HCC), the most common type of liver cancer.

The new combination comprises a single dose of tremelimumab (Imjudo) followed by treatment with durvalumab (Imfinzi) in what is known as the STRIDE (Single Tremelimumab Regular Interval Durvalumab) regimen.

This marks the first worldwide approval for tremelumumab, which is a CTLA-4 antibody.

The other drug in the combination, durvalumab, is an anti-PDL1 antibody and is already approved by the FDA for use in several tumor types, including lung cancer, bladder cancer, and biliary tract cancers.

The STRIDE regimen is composed of a single 300-mg dose of tremelimumab followed by durvalumab 1500 mg given every 4 weeks.

This regimen was used in the HIMALAYA phase 3 trial, which was published in June 2022 in The New England Journal of Medicine (NEJM).

“Patients with unresectable liver cancer are in need of well-tolerated treatments that can meaningfully extend overall survival,” he commented in a press release from the drug’s manufacturer, AstraZeneca.

When the results from this trial were presented earlier this year at the ASCO Gastrointestinal Cancers meeting, the discussant for that abstract, Anthony B. El-Khoueiry, MD, from the University of Southern California, Norris Comprehensive Cancer Center, Los Angeles, suggested that the STRIDE regimen offers a new first-line treatment option for patients with advanced HCC.

He also made several comments about the design of the HIMALAYA trial, which has a third treatment arm in which patients received durvalumab alone. El-Khoueiry noted that single-agent durvalumab was noninferior to sorafenib, but he added that no conclusions could be drawn about the STRIDE regimen in comparison with durvalumab as a single agent, because the trial was not powered for that.

The STRIDE regimen showed a lower risk of bleeding in comparison with combinations that include VEGF-inhibitors (such as bevacizumab), he said, but he also pointed out that this trial excluded patients with main portal vein thrombosis, who are at high risk of bleeding.

The manufacturer noted that severe and fatal immune-mediated adverse reactions may occur, including immune-mediated pneumonitis, colitis, hepatitis, endocrinopathies, dermatologic reactions, and others.

The company also noted that among the patients with unresectable HCC in the HIMALAYA study who received the STRIDE regimen, the most common adverse reactions (occurring in ≥20% of patients) were rash, diarrhea, fatigue, pruritus, musculoskeletal pain, and abdominal pain.

Permanent discontinuation of the treatment regimen due to an adverse reaction occurred in 14% of patients.