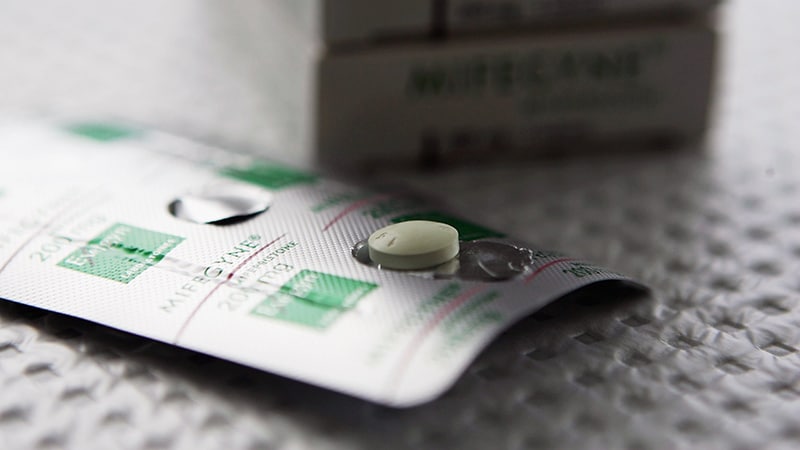 In a survey taken before the Supreme Court’s Dobbs ruling regarding abortion rights, two-thirds of assisted reproduction technology (ART) physicians who don’t offer mifepristone/misoprostol to patients with early pregnancy loss (EPL) reported that they lack access to the drugs.

The numbers are likely higher now. In the wake of the court ruling, some physicians in states with new abortion restrictions fear they won’t be able to properly treat women with miscarriages. Access to mifepristone, a component of medication abortions along with misoprostol, is at the center of their concerns.

“These restrictions that were put in place to restrict abortion care have far-reaching implications regarding miscarriages and early pregnancy loss and the assisted reproduction community is not immune,” obstetrics and gynecology specialist Zachary Anderson, MD, a resident physician at the University of Southern California, Los Angeles, said in an interview. He presented the findings at the American Society for Reproductive Medicine’s 2022 meeting.

Early pregnancy loss – defined as a miscarriage within 12 weeks and 6 days of conception – is common in all pregnancies and affects an estimated 15% of those who rely on in vitro fertilization (IVF). In women who conceive through intrauterine insemination or IVF, “an abnormal karyotype embryo/fetus is the cause of miscarriage in more than two-thirds of cases,” Mark P. Trolice, MD, director of the IVF Center and professor of obstetrics and gynecology at the University of Central Florida, Orlando, said in an interview. “The options of management are observation – with no ability to determine when passage of the products of conception will occur – vs. mifepristone/misoprostol or suction D&C.”

Trolice added that “most woman select the medical treatment protocol, which is 200 mg mifepristone orally followed by 800 mcg misoprostol vaginally 24 hours later. If no signs of heavy bleeding occur after 3 hours following misoprostol, the patient should repeat the dose of 800 micrograms vaginally.”

According to the Reuters news service, some abortion bans target mifepristone. In October 2022, the American College of Obstetricians and Gynecologists asked the Food and Drug Administration to approve mifepristone for use in miscarriage management; such use is now off label, although it is approved to end early pregnancies in conjunction with misoprostol.

For the new study, researchers sent anonymous surveys to 826 members of the Society of Reproductive Endocrinology and Infertility and received 101 responses (12% response rate, 51% women, 86% non-Hispanic White, average age 52, 52% urban, and 51% in private practice).

More than two-thirds (70%) said they diagnosed early pregnancy loss at least once a week; 47% prefer treatment with misoprostol alone, 18% surgery in an operating room, 15% expectant management (monitoring a miscarriage as it occurs without medical intervention), 10% surgery in the office, and 3% mifepristone-misoprostol.

Study coauthor Brian T. Nguyen, MD, MSc, assistant professor of obstetrics and gynecology at USC, said in an interview that mifepristone, a highly effective drug, is treated differently from other medications “for no good reason.”

Anderson, who led the study, urged colleagues to get the appropriate certification to prescribe mifepristone. “Providers overestimate how difficult it is to become certified to prescribe it,” he said.

Trolice, who is familiar with the study findings, said the response rate is low, and the results might be biased because those with preconceived opinions may be more likely to respond.

However, he said, “The results are not surprising in that medication is more commonly preferred (nearly 50%) given the devastation of a miscarriage and the desire to expedite resolution. Approximately one-third prefer surgical management, which would allow for genetic testing of the embryo/fetus to potentially determine a cause of the pregnancy loss.”

As for the medications used to treat early pregnancy loss, many ART physicians “treat pregnancy loss with misoprostol both pre- and post Dobbs,” he said. “The difficulty in obtaining mifepristone remains.”

The study authors and Trolice report no disclosures.