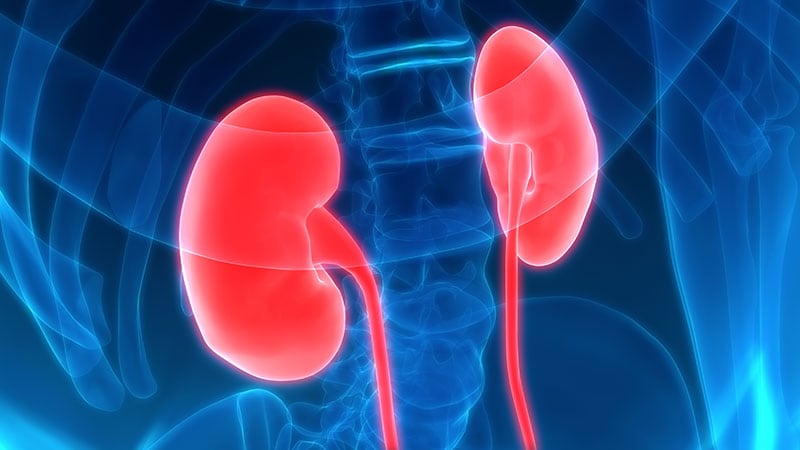 Treatment with finerenone produced roughly similar reductions in heart failure–related outcomes in people with type 2 diabetes and chronic kidney disease (CKD) across the spectrum of kidney function, compared with placebo, including those who had albuminuria but a preserved estimated glomerular filtration rate (eGFR), in a post hoc analysis of pooled data from more than 13,000 people.

The findings, from the two pivotal trials for the agent, “reinforce the importance of routine eGFR and UACR [urinary albumin-to-creatinine ratio] screening” in people with type 2 diabetes to identify new candidates for treatment with finerenone (Kerendia), Gerasimos Filippatos, MD, and coauthors said in a report published online in JACC: Heart Failure.

Among the 13,026 patients in the two combined trials, 40% had a preserved eGFR of greater than 60 mL/min per 1.73 m2 despite also having albuminuria with a UACR of at least 30 mg/g, showing how often this combination occurs. But many clinicians “do not follow the guidelines” and fail to measure the UACR in these patients in routine practice, noted Filippatos at the annual congress of the European Society of Cardiology in August.

“We now have something to do for these patients,” treat them with finerenone, said Filippatos, professor and director of heart failure at the Attikon University Hospital, Athens.

The Food and Drug Administration approved finerenone, a nonsteroidal mineralocorticoid receptor antagonist, for treating people with type 2 diabetes and CKD in July 2021, but its uptake has been slow, experts say. In a talk in September 2022 during the annual meeting of the European Association for the Study of Diabetes, Jennifer B. Green, MD, estimated that U.S. uptake of finerenone for appropriate people with type 2 diabetes had not advanced beyond 10%.

A recent review also noted that uptake of screening for elevated UACR in U.S. patients with type 2 diabetes was in the range of 10%-40% during 2017-2019, a “shockingly low rate,” said Green, a professor and diabetes specialist at Duke University, Durham, N.C.

A New Reason to Screen for Albuminuria

“It’s an extremely important message,” Johann Bauersachs, MD, commented in an interview. Results from “many studies have shown that albuminuria is an excellent additional marker for cardiovascular disease risk. But measurement of albuminuria is not widely done, despite guidelines that recommend annual albuminuria testing in people with type 2 diabetes,” said Bauersachs, professor and head of the department of cardiology at Hannover (Germany) Medical School.

“Even before there was finerenone, there were reasons to measure UACR, but I hope adding finerenone will help, and more clinicians will incorporate UACR into their routine practice,” said Bauersachs, who was not involved with the finerenone studies.

The analyses reported by Filippatos and coauthors used data from two related trials of finerenone, FIDELIO-DKD and FIGARO-DKD, combined by prespecified design into a single dataset, FIDELITY, with a total of 13,026 participants eligible for analysis and followed for a median of 3 years. All had type 2 diabetes and CKD based on having a UACR of at least 30 mg/g. Their eGFR levels could run as high as 74 mL/min per 1.73 m2 in FIDELIO-DKD, and as high as 90 mL/min/1.73m2 in FIGARO-DKD. The two trials excluded people with heart failure with reduced ejection fraction, and those with a serum potassium greater than 4.8 mmol/L.

In the FIDELITY dataset treatment with finerenone led to a significant 17% reduction in the combined incidence of cardiovascular death or first hospitalization for heart failure relative to those who received placebo. This relative risk reduction was not affected by either eGFR or UACR values at baseline, the new analysis showed.

The analysis also demonstrated a nonsignificant trend toward greater reductions in heart failure–related outcomes among study participants who began with an eGFR in the normal range of at least 60 mL/min per 1.73 m2. The researchers also found a nonsignificant trend to a greater reduction in heart failure–related events among those with a UACR of less than 300 mg/g.

In short “the magnitude of the treatment benefit tended to favor patients with less advanced CKD,” concluded the researchers, suggesting that “earlier intervention [with finerenone] in the CKD course is likely to provide the greatest long-term benefit on heart failure–related outcomes.” This led them to further infer “the importance of not only routine assessing eGFR, but also perhaps more importantly, routinely screening for UACR to facilitate early diagnosis and early intervention in patients with type 2 diabetes.”

Findings from FIDELIO-DKD and FIGARO-DKD led to recent guideline additions for finerenone by several medical groups. In August 2022, the American Association of Clinical Endocrinologists released an update to its guideline for managing people with diabetes that recommended treating people with type 2 diabetes with finerenone when they have a UACR of at least 30 mg/g if they are already treated with a maximum-tolerated dose of a renin-angiotensin system inhibitor, have a normal serum potassium level, and have an eGFR of at least 25 mL/min per 1.73 m2. The identical recommendation also appeared in a Consensus Report from the American Diabetes Association and KDIGO, an international organization promoting evidence-based management of patients with CKD.

“Finerenone provides a very important contribution because it improves prognosis even in very well managed patients” with type 2 diabetes, commented Lars Rydén, MD, professor of cardiology at the Karolinska Institute in Stockholm, as designated discussant for the report by Filippatos at the ESC congress.

The findings from the FIDELITY analysis are “trustworthy, and clinically important,” Rydén said. When left untreated, diabetic kidney disease “reduces life expectancy by an average of 16 years.”